Leaf and stem necrosis and dieback in rhododendron and other shrubs. Bleeding cankers in trees.

Infected shoots (buds and young stems) and leaves of plants become necrotic. Entire tufts of foliage often wilt at the end of the shoots and then desiccate. Leaf necrosis occurs in many 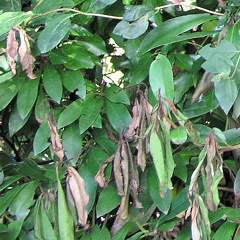 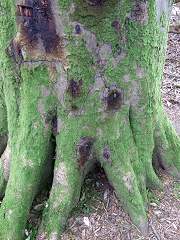 Our monitoring of infected trees suggests that the bleeding cankers are not contagious and the trees may recover from infection.

Bleeding canker caused by P. kernoviae on beech,
May 2006

Studies by Forest Research found P. kernoviae infecting plants of bilberry (Vacciniummyrtillus) in oak woodland and also openheathland in Cornwall. Bilberry is a native plant to Britain. It grows in lowlandand upland heathlands, but can also be found in some woodlands, grasslands and peat bogs.

Symptoms include stem blackening and necrotic leaves, although the affected leaves are quickly shed. 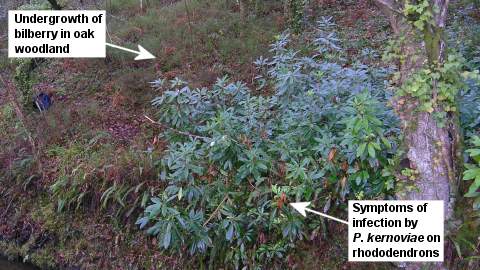 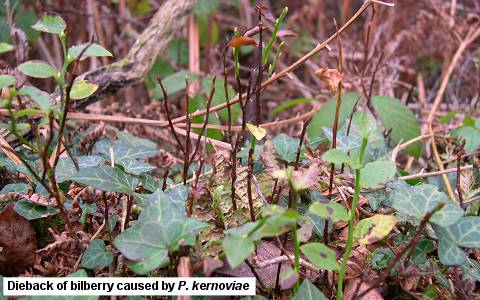 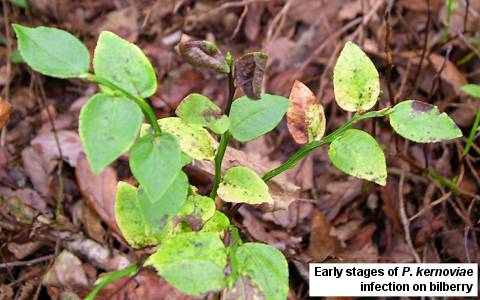 A wide range of different magnolia species and hybrids have been infected by P. kernoviae, picking up the infection from affected rhododendrons in the same garden. Our research shows that P. kernoviae can persist on infected tissues over winter a 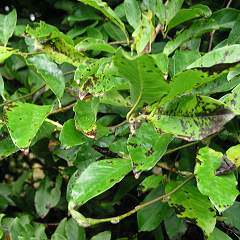 nd then re-infect the new flowers and leaves that are formed the following spring. The most common symptom in Magnolia is leaf spot; some species also show bud blast and blossom blight (IMAGE: P kernoviae infection of magnolia foliage).

The general symptoms of P. kernoviae infection make it difficult to diagnose without laboratory testing. If you find a rhododendron or tree exhibiting these symptoms, please contact our Tree Health and Disease Diagnostic Advisory Service. We may recommend you send us leaf or tissue samples so we can screen for P. kernoviae, P. ramorum and other possible pathogens.

If you suspect a plant has P. kernoviae or a similar infection, please report your sighting using the Forestry Commission’s Tree Alert form.