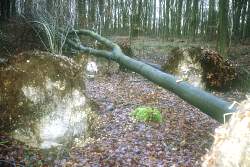 There are many potential issues arising from the management of archaeological evidence in wooded environments. Some examples are given below: 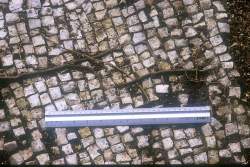 Potential tree/archaeological interactions can involve a number of site-specific processes such as changes in hydrology, soil chemistry, bioturbation due to root growth, windthrow, the effect of root exudates, and changes in soil structure and stability. Consideration must also be given to the scale of archaeological feature or evidence. For example, thick alluvial deposits allowing geoarchaeological study and palaeoenvironmental interpretation may be less affected by root growth than a small post-hole or storage pit.

One report commissioned to examine the impacts of forestry on a fort, settlement and field system at Tamshiel Rig, in the Scottish Borders, concluded that whilst root activity had effected some archaeological evidence, the extent of damage was dependent on the proximity to the trees. The worst site damage was caused during cultivation, and that root-induced problems were more local. The risk to near surface archaeological evidence directly from tree roots is also related to the stand density (the number of trees per hectare). Comparable findings were reported by a similar study of a settlement at Glen Brein, Highlands. Further research is needed on a wider range of tree species, soil types and archaeological evidence.

The damaging effects of cultivation techniques such as deep ploughing, ripping and drainage are well known. However, modern sustainable forestry practice has less requirement for many of these. With informed management practice, an increasing number of archaeologists believe that in some circumstances, continued tree cover may be an acceptable form of archaeological site vegetation.

Trees and forestry on archaeological sites in the UK: Areview 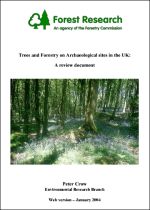 This document is a part of the ongoing review into impacts of tree growth and woodland management practices on archaeological sites in Great Britain. It is not a policy document, but is designed to outline and raise awareness of the many possible issues.

It is not the intention of the ongoing review to suggest tree retention or planting at the expense of the archaeological resource, but to promote further detailed scientific discussion and research. This will lead to a more informed management where each site is evaluated on its own environmental and archaeological merits.

Trees and forestry on archaeological sites in the UK: A review (PDF-1653K)