Pine processionary moth (PPM) larvae, or caterpillars, are a threat to the health of pine (Pinus) and some other conifer tree species, as well as a hazard to human and animal health. (Picture: John Ghent, Bugwood.org)

PPM, like its close relative the oak processionary moth (OPM; Thaumetopoea processionea), gets its name from the caterpillars’ distinctive habit of moving about in nose-to-tail processions.

Pine processionary moth is native to southern Europe, North Africa and parts of the Middle East. However, assisted by the international trade in live plants, it has been extending its range northwards, and is now established as far north as Hungary, Switzerland, and the Paris region in France.

There are no known established populations in the United Kingdom, although single moths, and in one instance a transient population, have occasionally been found in southern England.

Pine processionary moth caterpillars feed on the needles of pine trees and some other conifer tree species, and in large numbers they can severely defoliate trees. This can weaken the trees, making them more vulnerable to attack by other pests or diseases, and to environmental stresses such as drought or flood.

Like OPM, PPM caterpillars also have thousands of tiny hairs which contain an urticating, or irritating, protein called thaumetopoein, giving rise to its scientific name. If these hairs come into contact with people and animals, they can cause painful skin, eye and throat irritations and rashes and, in rare cases, allergic reactions.

The fact that its range has been extending towards England increases the risk of its being accidentally introduced to the UK.

The moths (the adult form of the species), which are difficult to distinguish from other species, are harmless to people and animals.

Pine trees (trees of the Pinus genus) are most susceptible to pine processionary moth, and the following species are particularly susceptible:

Among these species, European larch, Scots pine and lodgepole pine are widely grown in the UK, although all are present. Scots pine is our only native pine. 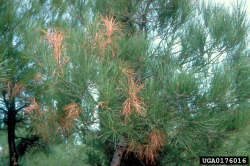 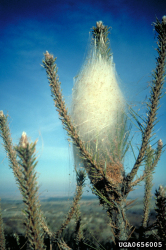 Otherwise the white, silken nests (above), which the caterpillars build among the foliage in January, are the most obvious other sign of the pest’s presence. These nests can be as big as a football. (Picture: D.D. Cadahia, Subdireccion General de Sanidad Vegetal, Bugwood.org) 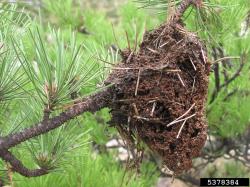 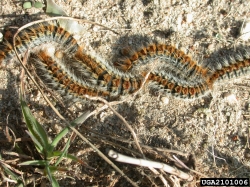 The caterpillars (above) are hairy and coloured orange-brown with blue bands, and they move about in nose-to-tail processions on the trees or on the ground beneath the trees in winter and early spring. However, they tend to remain in their nests during the daytime and only come out to feed at night, when fewer people are visiting woodlands and they are less likely to be seen. (Picture: François-Xavier Saintonge, Forest Health Department, Bugwood.org) 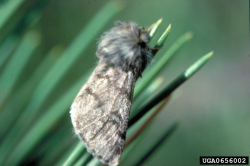 Pine processionary moths (above) have cream forewings with brown markings, and white hindwings, but to an untrained observer they are difficult to distinguish from other species. They emerge and fly from about May to July. (Picture: D.D. Cadahia, Subdireccion General de Sanidad Vegetal, Bugwood.org)

This pest alert can be printed and used as a poster or leaflet to help identification and raise awareness among relevant groups, such as nursery and garden centre staff.

If, after studying the identification guidance here, you think you have seen evidence of pine processionary moth, please report it immediately to the plant health authorities.

Note that TreeAlert and TreeCheck require at least one clear, well-lit digital photograph to be uploaded.

We particularly encourage people working in the live plant trade to be vigilant for signs of pine processionary moth presence on imported pine and other conifer plants, and to report suspected sightings. Suspected sightings on plants in trade should be reported:

We do not require reports of adults/moths, although we welcome reports from amateur moth recorders who can accurately identify them.

Movement of plants for planting

There is a risk of larvae, or caterpillars, being brought into the UK on plants being imported for planting. However, plants are usually imported in winter and spring, when the white silken nests which the caterpillars form in the trees in winter are obvious. This factor greatly mitigates the risk from plant imports, as long as shippers and recipients of plants are aware of nests’ significance. 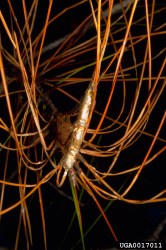 Spread by egg masses (above) being moved on plants for planting is considered to be a low risk. This is because pine trees are not usually imported and planted in the summer, when adult moths lay their eggs, and the larvae will have emerged from the eggs before winter, when most pine plants are shipped and planted. Adult females are short lived and unlikely to remain with planting material being moved. (Picture: William M. Ciesla, Forest Health Management International, Bugwood.org) 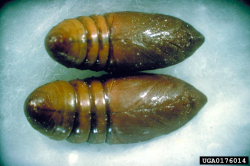 Although also thought to be a low risk, pupae (above) could be brought into the UK in the soil of pine or other host plants for planting, or with any plants which have been growing in the vicinity of infested plants before export. (Picture: D.D. Cadahia, Subdireccion General de Sanidad Vegetal, Bugwood.org)

Inspection is unlikely to detect pupae, which can remain in the soil for up to three years before the larvae emerge. This is the pathway by which it is believed that PPM was moved to the Paris area. However, the volume of imports of host plants (or other plant species growing in their vicinity) with soil from areas where PPM is present is not likely to be large.

Adults of both sexes can fly, and natural dispersal depends on the flight capacity of female moths, which is lower than that of males. Average female flying distance is 1.7km, with a maximum recorded of 10.5km. This is consistent with the rate of spread recorded in the area south of the Paris Basin, which has been reported as 5.6km per year.

The adult moths live for about a day in the summer, during which time they mate and lay eggs in pine trees.

The larvae, or caterpillars, emerge in autumn from the eggs laid in the summer, and begin feeding on the trees’ needles in autumn.

About January the caterpillars build distinctive, tent-like nests of white, silken, webbing up to the size of a football in the branches and foliage of pine trees. There can be several nests in a single tree. The caterpillars spend the remainder of the winter in these nests high in the trees, spending the days in these nests, and leaving them at night to forage on the trees’ needles.

In early spring they form processions on the ground before pupating in the soil until summer, when they emerge as adult moths. This pupal stage can, however, remain dormant for another year, or even two years, extending the life cycle over two or three years.

The UK has had European Protected Zone (PZ) status for pine processionary moth since 2017, providing additional protection against the risk of its being accidentally introduced in trade. This means that all imports of pine plants must be accompanied by a plant passport, which certifies that the plants have been grown in a PPM-free place of production (such as a nursery and its surrounding area), a PPM-free area, or a PPM-free country. (Pest-free places of production, areas or countries are defined by countries’ own national plant protection organisations (NPPOs).)

An additional protection, which was already in place, is the requirement to notify pending landings of pine plants to the UK plant health authorities, to enable inspection. See the UK Government website for an explanation of the regulations applying to the importation of live plants.

The volume of imports of host plants (or other plant species growing in their vicinity) with soil from areas where PPM is present is not likely to be large.

A programme of surveillance to monitor pine trees in the wider environment is in place. This is because the UK’s status as a protected zone is conditional and dependent on our not finding that the pest has become established widely throughout the UK.

Should the pest be found in the wider environment (that is, outside trade premises) in the UK, the first response would be to try to eradicate the outbreak to prevent establishment and spread. Using emergency powers available to them, the appropriate forestry authority* would issue Statutory Plant Health Notices (SPHNs) to affected tree owners requiring them to have the infestations removed.

Possible treatment options include pesticide applications during the larval stage of the lifecycle, and manual removal of nests and caterpillars by trained operators.

For full details of the proposed response to an outbreak, see the

*The forestry authorities are:

If pine processionary moth is ever found in the UK, taking the following simple precautions in the affected areas will help to minimise the health risks to people, pets and livestock. They are similar to those advised for oak processionary moth.

Further health advice is available from the NHS website – look for the information about caterpillar hairs.

Pine processionary moth is native to southern Europe, North Africa and parts of the Middle East. The full list of countries where it has now been recorded as established is:

Single adult moths have occasionally been found in southern England: in 1966, in August 2013, and in summer 2017. The latter two were found in south-coast locations, and had probably been blown across the Channel from France. However, the origin of the 1966 moth, which was caught in a light trap in Berkshire, is not known.

The transient population of larvae was found in a nursery in 1995 on Scots pine plants which had been imported from Italy in 1994. The affected trees and soil were treated, and subsequent monitoring did not detect any further evidence of the pest.