Not notifiable – See 'Report a sighting' below

Green spruce aphid (Elatobium abietinum) is an important defoliating pest of spruce trees (trees in the Picea genus), especially Sitka spruce (Picea sitchensis), which is widely grown in the UK for the softwood timber market.

Green spruce aphid is native to continental Europe, but it is now also known to be present in the UK, North America, Australia, New Zealand and Chile. See 'Origins and background' below for more details.

Green spruce aphids are pests almost exclusively of spruce trees. These include its native host, the Norway spruce (P. abies), although Norway spruce is not greatly affected because of their shared evolutionary history in continental Europe.

However, species of spruce which have not evolved alongside green spruce aphids are significantly affected by the toxins secreted when the aphid feeds. These include most North American spruces, including Sitka spruce in UK forestry plantations, and Colorado blue spruce (P. pungens) in amenity situations.

Green spruce aphids have also been found on other species of conifer trees, including various species of fir (Abies species). However, this is exceptionally rare, and has only been seen on fir trees standing close to spruces, and in years when the aphid population has reached particularly high levels. Damage to non-spruce trees has usually been limited.

Although green spruce aphid-induced defoliation results in a relatively low numbers of tree deaths, the loss of needles affects trees’ growth by reducing leader extension and timber volume increment. This can result in the trees taking longer to reach economic maturity, with implications for the businesses and employment which depend on Sitka spruce.

Infestation by green spruce aphids also makes trees more susceptible to other causes of death, such as bacterial and fungal attacks, and drought. There is therefore a risk that if the aphid cannot be cost-effectively managed, the combined effects of these threats could deter timber growers from growing Sitka spruce, which is otherwise well suited to British growing conditions and market requirements. 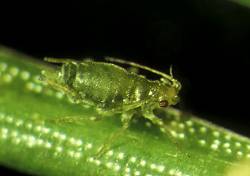 Green spruce aphid adults are tiny, between 1 and 2mm long, and are pale to dark green (above, and top picture). They are therefore unlikely to be seen without very close examination of the tree at the appropriate time of year. In the UK, adults are almost always the apterae (wingless) form.

Identification of their presence is therefore easier from the symptoms, such as defoliation (loss of needles) and chlorosis (yellowing) of needles, than it is from finding the actual insect.

The following are three indicators of green spruce aphid infestation. 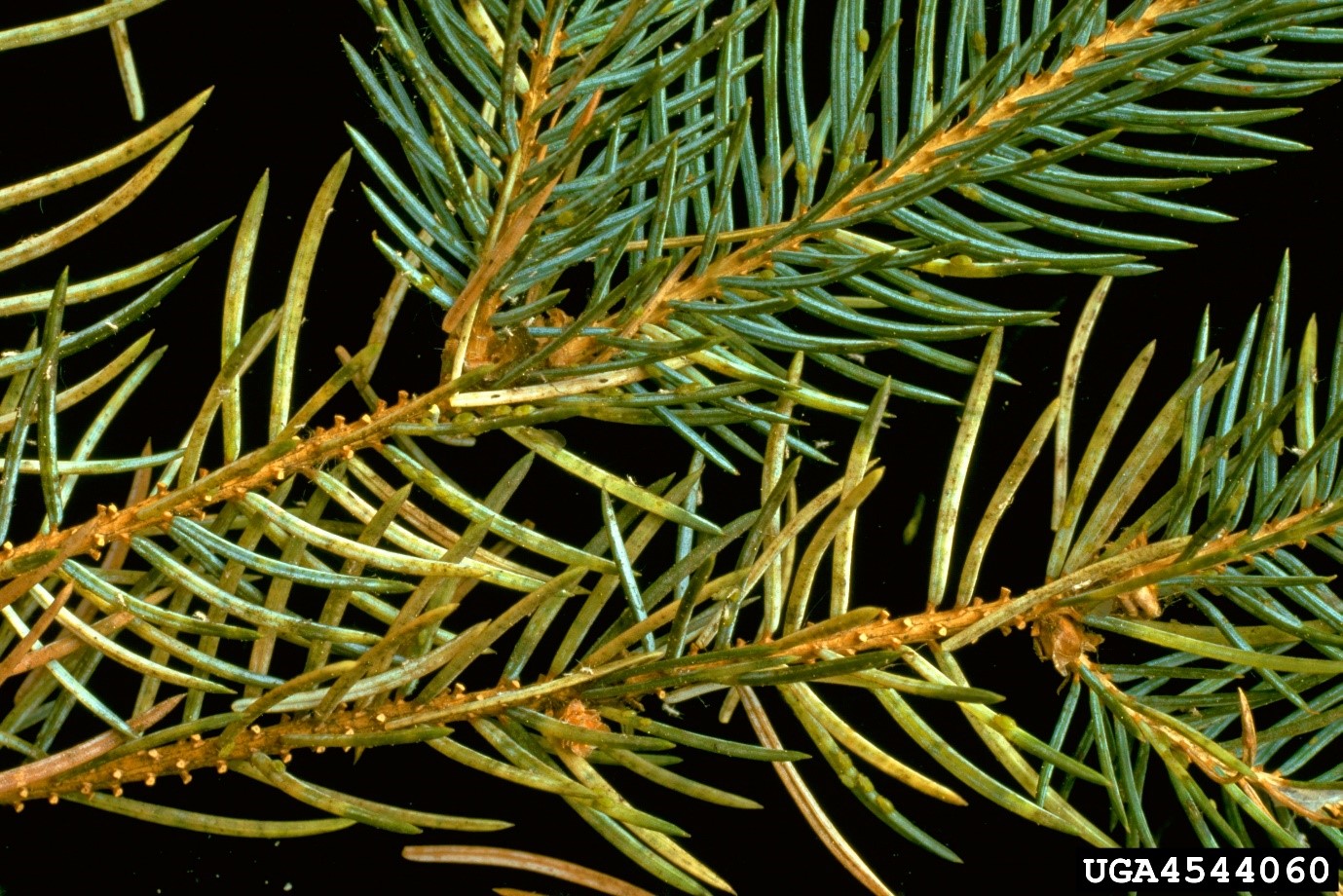 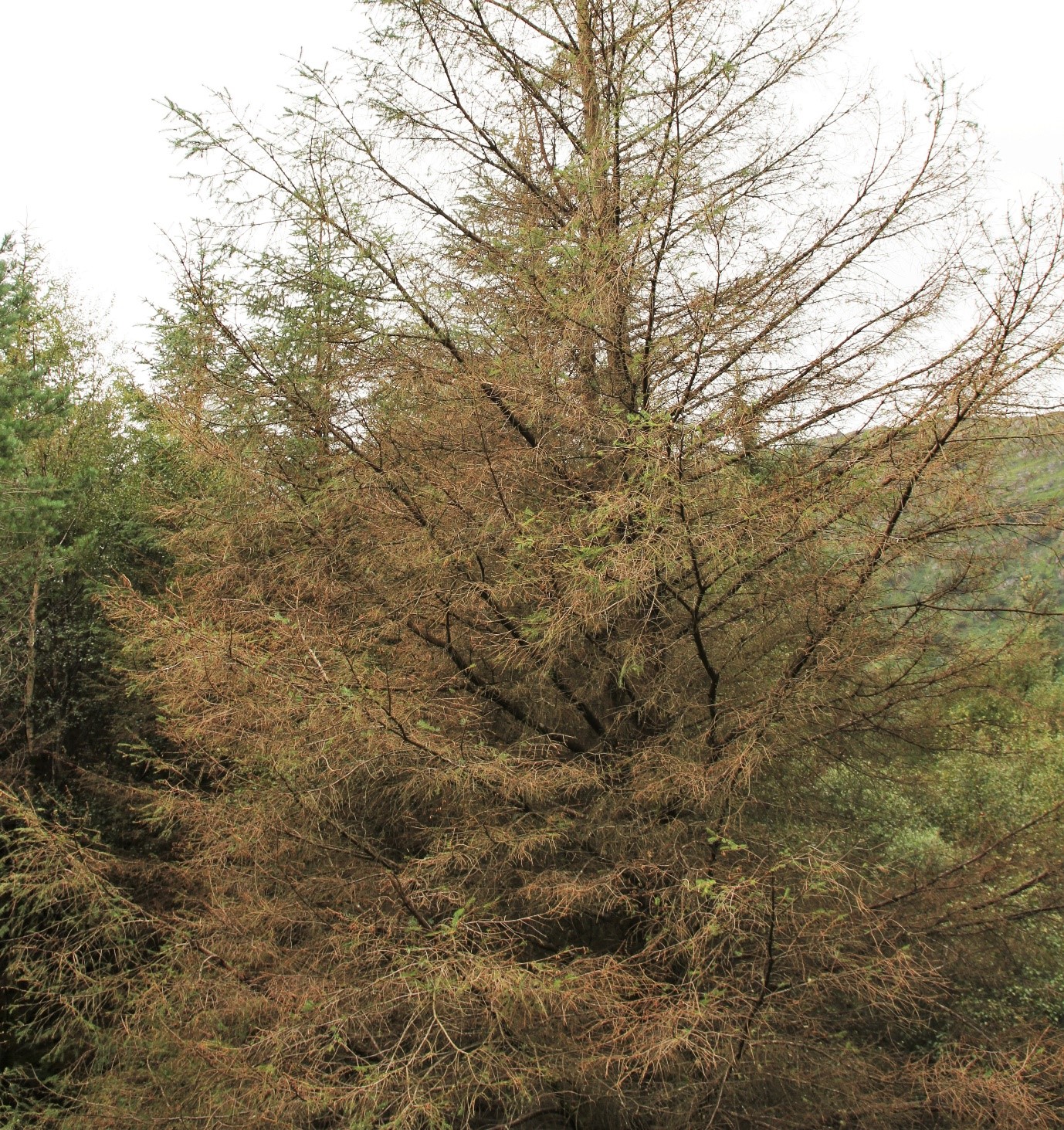 The aerial view below shows a mixture of Noble fir (Abies procera, with the blue needles), and Sitka spruce, the latter showing moderate chlorosis and defoliation by green spruce aphid. 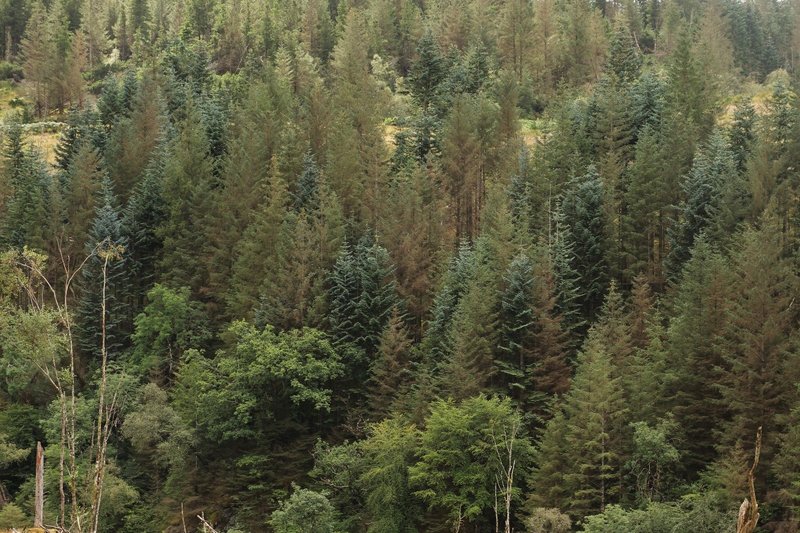 Green spruce aphid infestations occur almost exclusively in plantations of spruce trees being grown for the timber market. British foresters are trained to recognise and control the pest, and there is little risk to other plant species, so there is no requirement to report suspected cases to the plant health authorities.

However, advice on diagnosing and dealing with green spruce and Cinara aphids can be requested through TreeAlert, our on-line tree disease reporting tool. If you cannot use TreeAlert, contact our Tree Health Diagnostic & Advisory Service directly. Note that there might be a fee for its services.

Green spruce aphids feed on the needles, taking nutrients from the sap that was stored in the needles over winter for new bud growth. The quantity of nutrients taken from each individual tree is relatively minor, and does not in itself adversely affect the tree’s health.

The damage inflicted by a green spruce aphid infestation arises from the toxins that are secreted by the aphids as they feed. These toxins cause the chlorotic spots and bands to form on the needles. (Chlorosis is the yellowing caused by a lack of chlorophyll).

With continual feeding, these patches coalesce, eventually resulting in the needle turning brown, dying, and falling from the shoot. In high numbers, this can cause severe defoliation.

Defoliation not only reduces the photosynthetic capacity of a tree, but also results in a decrease in the leaf space the tree has left for storing nutrients for the next year’s new shoot growth. This affects the growth of the tree.

Green spruce aphid is found on trees all year around in the UK. This is thanks to our mild winter temperatures, allowing green spruce aphids to give birth to live young throughout the year in what is known as an anholocyclic life cycle, rather than including an over-winter egg phase, which is employed in regions with colder winters.

However, it is only really during spring, when spruce trees are preparing to flush new needles, that green spruce aphids cause the defoliation for which they are known.

Green spruce aphids become active from March to May in maritime regions of north-western Europe (including the UK) and North America. Populations begin to increase as the temperature and day length increase, spurring the spruce tree to translocate nutrients stored within the older needles into the buds to nourish new growth.

At the same time, toxins in the aphids' saliva begin to build up, and these are secreted as they feed and breed on the older needles, causing them to develop the chlorotic, yellow banding before turning brown and falling off the shoot.

Once the new tree buds have flushed and shoot extension begins, and as the nutritional quality of the sap the aphids have been feeding on diminishes and the temperature continues to rise, the population largely dies off.

The reduced population then persists into autumn, when numbers can increase slightly again. Numbers are further reduced as winter approaches, although in the case of successive mild winters (when temperatures do not fall below -8 degrees C), winter mortality is low, providing a bigger starting population than usual for the following spring.

The cyclical effect of green spruce aphid on spruce trees is largely dependent on its maximum population density in any given year. The aphids can cause acute needle defoliation in years when population sizes are at their maximum. This reduces the needle space available to the tree for storing the nutrients which would otherwise accumulate over summer in preparation for needle flush the next spring, slowing the growth of the tree.

Green spruce aphids have predators and parasites, and local populations of these boom as aphid numbers increase. Carry-over to the next year, as well as the reduction in needle-held nutrients for the aphids, also heavily impact the aphid populations, causing a population crash in the post-boom year.

A decrease in green spruce aphid numbers provides the affected trees with time to recover and re-grow lost needles, eventually increasing the available food source for green spruce aphids. After a couple of years, a mild winter might once again trigger a green spruce aphid peak, and such peak years occur roughly every three to six years in Great Britain.

In the UK, the last green spruce aphid peaks were reported in 2012 and 2015, and reports from Scotland and South-West England indicate that 2019 was another peak year there.

Peak years never occur back to back, so trees are seldom killed solely by green spruce aphids. However, the loss of new growth and the frequency of attacks make green spruce aphid an important ‘background’ pest, whose effects might be exacerbated by climate change.

Green spruce aphids feed on the nutrients in the needles in April and May. Therefore the damage has already been done by the time the chlorosis and defoliation symptoms begin to appear in June, and the aphids will be long gone, experiencing their summer decline. Chemical control is therefore not recommended, because it will be ineffectual, and will be outweighed by the negative effects on non-target wildlife.

Research has shown that increasing the biodiversity of natural aphid predators across the landscape is the most promising way to protect trees against infestation and limit the damage of a peak year. This can be achieved by creating diversity in the landscape by using alternative silvicultural methods, such as mixed-age stands. This creates diverse habitats that can support more species and therefore more predators.

Forest Research has conducted extensive research into green spruce aphid with a view to providing the best possible advice to forest managers on how best to manage the pest to minimise its population and impacts. More information about this research is available on our green spruce aphid research page.

Green spruce aphid populations have spread from continental Europe following human movement and introductions of spruce as ornamental and forestry trees. As a result they are now found in Australia, New Zealand, Chile, North America and the UK.

Green spruce aphids have a strong dispersal ability, although whether they arrived in the British Isles under their own steam or were introduced with importations of spruce plants for amenity and forestry purposes is not known.

Unusually, the aphid was described as a species new to science from material in London (Walker, 1849), rather than from tree material in its native range in continental Europe.

The spread and potential effect of green spruce aphid on spruce trees did not become clear until after the expansion of conifer forests in the UK in the 1900s, where it was able to feed on both its native Norway spruce and the introduced Sitka spruce.

Information current as of 2020

Straw, N. A., Williams, D. T., Fielding, N. J., Jukes, M., Connolly, T., & Forster, J. (2017). The influence of forest management on the abundance and diversity of hoverflies in commercial plantations of Sitka spruce: the importance of sampling in the canopy. Forest Ecology and Management, 406, 95-111.