The larvae, or caterpillars, of the Siberian silk moth are a destructive pest of several species of conifer trees, some of which are grown in the United Kingdom for commercial and/or nature conservation purposes. It is also a human and animal health hazard.

Siberian silk moth is widespread on the Asian continent, being present in eastern parts of European Russia, and in almost all of Asian Russia except the extreme north and the Sakhalin and Kurile Islands. It is also present in China (Heilongjiang, Jilin, Liaoning and Neimenggu), Kazakhstan, northern Mongolia and the Korean Peninsula.

It has been spreading westwards towards Western Europe at a rate of between 12 and 50 kilometres (7.4 and 31 miles) per year, and males were captured near Moscow in 2001.

It has never been recorded in the wider environment in the European Union, including the UK.

The caterpillars feed on the needles of conifer trees such as pines, spruces, larches and firs (trees in the Pinus, Picea, Larix and Abies genera). A large infestation can cause significant defoliation (needle loss) in natural and planted forests. They can kill healthy trees, and have been known to kill whole forests across wide areas.

It will attack European conifer species which are not found in its native range, but which are grown in the UK, and would therefore pose a threat to our conifer forests if it became established here. (See 'Susceptible species' below.) This could have an economic impact on our timber-producing industries, which rely heavily on conifer species, and an ecological and biodiversity impact, especially on our woods and forests of native Scots pine (Pinus sylvestris).

Outbreaks are often followed by outbreaks of wood-boring beetles, which can kill trees which have been heavily stressed by Siberian silk moth. The resulting accumulation of dead, dying and stressed trees and fallen branches and foliage can then increase the risk of forest fires.

It is also a human health hazard because the caterpillars’ hairs, and the sticky trails which the caterpillars leave behind them, contain a substance which on contact which can cause health problems. These include skin irritations such as severe dermatitis, and systemic conditions such as joint pains. Forestry workers, forest visitors and people living close to affected trees are therefore most at risk. 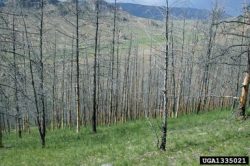 Defoliation (left) is the main symptom of the pest's presence. Trees can be defoliated two or three years in succession during severe outbreaks, and many trees are unable to withstand such long periods of defoliation.

The colouring of adult moths (top picture) varies from yellow-brown to light grey, dark brown and almost black. The forewings are marked by two characteristic dark stripes and a white spot in the centre. Hind wings are the same colour as the forewings, but lack markings.

The following pictures show the three other main stages of the species’ life cycle.

Cocoons, in which the larvae pupate into adults/moths.

Although Siberian silk moth is not known to be present in the UK, there is a risk of its being accidentally introduced, especially through international trade in plants, wood and wood products. We therefore urge everyone, and especially tree and plant professionals and importers of wood and plant materials, to remain vigilant for signs of it and to report suspected sightings to the forestry authorities immediately.

Note that TreeAlert and TreeCheck both require clear, well lit digital photographs of the pest or symptoms of its presence.

Suspected sightings on plants and other planting material in trade should be reported:

All stages of the life cycle can be transported on plant material moving in trade, particularly plants for planting, cut branches and Christmas trees. During severe outbreaks, eggs, larvae and cocoons can be moved on bark, or wood with the bark still attached, and can be present as contaminating pests on other products. Cocoons are often moved on branches collected for firewood.

Siberian silk moth was added to the European & Mediterranean Plant Protection Organisation’s (EPPO) A2 action list in 2002, and it has been recommended that EPPO member countries regulate it as a quarantine pest.

The moth is apparently spreading westwards through Europe, so carrying out surveys using pheromone traps would help to monitor its spread, and applying appropriate control measures along the border of the pest’s present range would help to prevent its introduction into new areas. (EPPO, 2005)

To prevent the introduction of the pest, it is recommended that:

Visit the UK Government website for guidance on the regulations designed to prevent the accidental introduction of tree pests and diseases with imports of:

If an outbreak of Siberian silk moth were to be discovered in the UK, the official response would be guided by the Forestry Commission’s contingency plan, which was drafted in consultation with our scientists. In the first instance it would aim to eradicate the outbreak population.

Significant control efforts are undertaken during severe outbreak years in Russia and other affected countries. These involve mostly aerial treatment with chemical and bacterial products. The species’ natural enemies play an important role in regulating its population density under normal conditions. The natural enemies include:

Siberian silk moth is native to Russia and China, and has spread to other parts of Asia. It is presumed to have originated in Siberia, but has apparently been spreading westwards.

The most westerly points at which outbreaks are known to have occurred are in the Perm and Udmurtia regions, north of the Caspian Sea, but males were captured in 2001 in pheromone traps more than 1000km (625 miles) further west, near Moscow.