Budworms are the larvae, or caterpillars, of certain moth species. They are so-called because of their habit of eating the buds of flowers.

These four budworms (there are two species of black-headed budworm) are serious and destructive pests. They cause high numbers of deaths among conifer trees, especially spruces (species in the Picea genus), firs (Abies spp.), larches (Larix spp.), hemlocks (Tsuga species), Douglas fir (Pseudotsuga menziesii) and some other conifer species.

Their scientific names are:

Budworms are present in eastern, western and northern states of the USA, and western and south-central parts of Canada. Individually, their distributions are:

They have not been recorded in the United Kingdom, but there is a risk that they could be accidentally introduced.

Several of the tree species which budworms will attack are grown in the UK. See 'The Threat' below for more information

Western spruce budworm occurs principally on Douglas fir and other forest trees, such as fir species.

Eastern spruce budworm occurs mainly on spruces and firs, but can also be found on Douglas fir, pines and, occasionally, on hemlocks and larches. It is one of the most widely distributed forest insects in North America. Severe outbreaks have been recorded since the mid-1930s in Ontario, Quebec and the Atlantic region, and many trees have been killed. It particularly attacks:

Several suitable host tree species are present in the UK. Some, such as Sitka spruce, Douglas fir and western hemlock (Tsuga heterophylla), are important commercial forestry species widely grown here for the timber market. The UK climate is also suitable for budworms. They could therefore pose a threat to conifer trees and forests if they entered the UK, and to the hundreds of millions of pounds of investment, businesses and jobs which depend on them.

Defoliation (needle loss) is the main symptom of budworm attack.

Western spruce budworm is one of the most serious forest defoliators in western North America. Heavy and repeated attacks can lead to top death of the trees and whole-tree deaths. Feeding starts on buds and new foliage and, if populations are relatively small, is confined to those parts of the tree. However, if populations are high, all new foliage can be destroyed. Feeding then takes place on older foliage, which can lead to complete defoliation and death of the tree.

The picture below shows landscape-scale damage of grand fir in Oregon caused by Western spruce budworm. 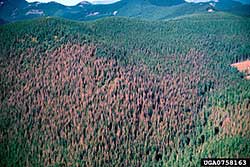 Pictured beliow is defoliation and damage on spruce caused by Eastern spruce budworm. 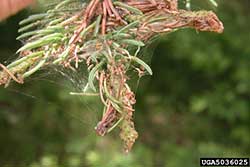 Black-headed budworm: depending on population density, defoliation by black-headed budworms can be extensive, with a tendency for the effects to be greatest near the tops of trees and on the canopy edges. This reflects the adults’ preference for attacking dominant and co-dominant trees within a stand. Partial feeding, resulting in needle breakage, but not complete consumption, results in reddening of the foliage. This starts in June and continues through July, depending on latitude. Top death and, at very high attack densities, whole-tree death, can occur.

The picture below shows foliage discolouration after attack by black-headed budworms. 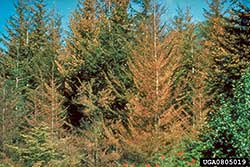 Although none of these budworms is believed to be present in the UK, there is a risk of their being accidentally introduced. We therefore urge the public, and especially tree and plant professionals and importers of wood and plant materials, to remain vigilant for signs of them. Suspecting sightings of the insects or symptoms of their presence must be reported immediately to the plant health authorities.

Please note that TreeAlert and TreeCheck both require photographs to be uploaded. These should be clear, well-lit, close-up pictures of symptoms, and/or the caterpillars themselves.

Identified pathways for international movement of all four species include plants for planting and cut branches (including foliage) of host plant species. These could hold all the insect's life-cycle stages except adults (moths), that is:

Current European Union regulations prohibit imports of planting material and cut branches (including foliage) for all identified tree hosts of the four budworm species. If applied rigorously, these controls should prevent the introduction of the pests from North America to the UK and the rest of Europe.

The Forestry Commission's contingency plan outlines the actions which would be taken if an outbreak of any of these budworms were found in the UK.