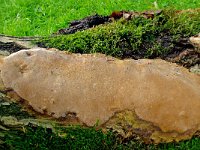 The fungus was known before 2016 as Phellinus punctatus, and it has also been known as Polyporus punctatus and Poria punctata.

It gets its common English name, elbow-patch crust, from the appearance of the fungus patches, or cankers.

F. punctata has been found in the United Kingdom and confirmed cases have been widespread in Scandinavia and Western Europe, with more-isolated records as far east as Russia. More-isolated findings have also been recorded in Japan, New Zealand and North, South and Central America.

A map of geo-referenced records is available on the Global Biodiversity Information Facility website.

It is known that London plane trees are susceptible to F. punctata infection, but there is little information available on the susceptibility of other species of plane (species in the Platanus genus), or of other plant species. It has, however, been recorded on hazel (Corylus avellana), kiwifruit (Actinidia deliciosa) and grapevines (Vitis vinifera).

Affected trees frequently suffer from branch and stem (trunk) failure brought about by the decay which the fungus causes. This can create a public safety hazard if it is not detected in time to take action to prevent the tree or branches falling.

Information within the arboricultural community suggests there is a clone of plane (introduced about the 1970s) with a propensity to develop weak forks, making them particularly prone to breaking if they are infected with elbow-patch crust. Mature trees with this problem are easy to spot, and the advice is to source nursery stock carefully.

It adds another level of threat to plane trees, which are already under attack in Europe from massaria, canker stain of plane and the Inonotus hispidus fungus.

F. punctata infection can cause cankers ('elbow patches') on the bark, but because these are pale buff and flat, they can be difficult to see during the early stages of development on the mottled bark of plane trees. Its fruit bodies merge into the bark, but the presence of a narrow to broad black zone at the top of the fruit body is diagnostic.

It initially causes a rapidly spreading canker before developing an intense white rot involving both sapwood and heartwood.

More images are available elsewhere on the internet.

We encourage tree and ground-care professionals, plane tree owners and managers, and the public, to be vigilant for signs of elbow-patch crust on plane trees, and to report suspected sightings to the plant health authorities immediately.

In all cases, provide precise details of the location and, if possible, clear, well lit, close-up photographs of the symptoms.

The best means of preventing and minimising the spread of elbow-patch crust disease are:

Imports of plane wood and planting materials (such as seeds, plants and cuttings) into the UK are subject to regulation. Visit the UK Government website for an explanation of the regulations applying to the importation and movement of:

The wide distribution of elbow-patch crust in continental Europe suggests that it probably originated somewhere in the region. The isolated nature of findings elsewhere suggests that it has been introduced to those locations.

It was first identified in the UK in 2008, on a London plane tree in West Sussex.