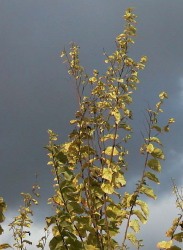 ‘Yellows’ is a plant disease caused by a group of organisms called phytoplasmas, which are specialised forms of bacteria. One of these phytoplasmas, Candidatus Phytoplasma ulmi, can infect elm trees (trees in the Ulmus genus).

The disease is also known as elm phloem necrosis, especially in North America.

Elm yellows has been found in elms in Italy, France, Germany, eastern states of the USA, and southern Ontario in Canada.

It was also found in 2013 on some elm plants imported into England in 2012. The plant health authorities took immediate eradication action, and subsequent surveys have found no evidence that it became established here.

Our native elm species, Wych elm (U. glabra), has not been confirmed as a host, and is considered to be resistant to elm yellows in America.

Phytoplasma infection of elms has a range of effects, depending on the host plant's level of susceptibility. In very susceptible elms the phloem (inner bark) of the tree is attacked, giving rise to the alternative name, elm phloem necrosis. This effectively girdles the tree and stops or disrupts the flow of nutrients from the leaves to the rest of the tree.

Infection can be very destructive to some elms, particularly North American species. However, it is thought that European elm species tend to be much less affected than the highly susceptible American elm (U. americana). This has been the experience elsewhere in Europe, including Italy, France and Germany.

Although Britain has lost tens of millions of elm trees to Dutch elm disease (DED), many millions remain. These are mostly young specimens of English elm which have regenerated from the surviving roots of trees which have died; and others which have grown from the seeds of other, less-susceptible elm species, some of which can produce a lot of seed at a young age. Sadly, many of these also eventually succumb to DED.

The fact that elm yellows phytoplasma can affect elm species which can resist or tolerate DED, and which are important for conservation purposes, means it is important to prevent it from becoming established in the UK if at all possible. This will also help to prevent possible spread to other wild and cultivated hosts. Taking swift, robust action at the first opportunity is the correct approach.

Symptoms of elm yellows include: 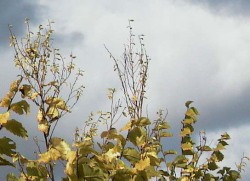 Elm yellows symptoms can easily be confused for symptoms of Dutch elm disease, which commonly begin to appear on elm trees from late summer. However, symptoms on newly planted material are unlikely to indicate DED, and could be due to another natural cause.

Trees with DED will die back and die rapidly, whereas elm yellows can cause symptoms which do not result in the death of the tree.

Other diseases can cause similar symptoms on elm, so laboratory testing is needed to confirm infection by elm yellows phytoplasma.

A Forestry Commission Pest Alert, available from ‘Downloads’ below, provides more help with identifying the symptoms. (Note that since it was published some contact details given in the Pest Alert have been superseded by those given on this page.)

Although elm yellows is not known to be present in the UK, there is a risk of its accidental introduction, especially in the trade in plants. We therefore urge constant vigilance and immediate reporting to the plant health authorities of any suspected sightings.

Alternatively, reports can be made directly to the country plant health authorities. This is the preferred option if the suspected sighting occurs on trade premises, such as a nursery or garden centre.

The plant health authorities are:

The phytoplasma which causes elm yellows disease can be spread by insects such as leafhoppers, and by the movement of infected plants. Spread from infected trees by natural means is unlikely during the winter, when trees have no leaves and insect vectors are not active.

The only known treatment is to destroy infected trees before the disease can spread to healthy trees.  Guidance about destruction is given in the Elm Yellows Contingency Plan, available from 'Downloads' below.

Several hundred plants imported from Italy in 2012 were involved in the find in 2013, as were a number of plants propagated from them.

Diseased plants were identified at two nurseries in England. Some plants had been distributed in small numbers from these nurseries to individuals and organisations, and others were planted out at Forestry England (formerly Forest Enterprise England) sites and by conservation groups. The infected imported plants, and others propagated from them and which remained in nurseries, were destroyed under Statutory Plant Health Notices. We also traced other elm plants from the same sources.

Surveillance around them was undertaken in the summer and early autumn, when any phytoplasma present could have been be detected by testing. Susceptible plants close to infected trees were monitored for signs of spread into the wider environment. No evidence was found to suggest that the disease had spread into the wider natural environment, and we might not even have an effective vector, or agent of spread.  Further surveys in subsequent years have also found no evidence of the disease.

The steps that would be taken in the event of an outbreak of the disease in the UK are set out in the Forestry Commission’s Contingency Plan, available from ‘Downloads’ below.

For many years there have been general EU requirements aimed at preventing the introduction and spread of the elm yellows pathogen in the EU. There are also specific requirements applicable to elm planting material imported from outside the EU, to prevent infected trees being imported.

The UK was given European Union Protected Zone (PZ) status for elm yellows phytoplasma in 2017, providing additional protection against the risk of its being accidentally introduced in trade. This means that all imports of elm plants must be accompanied by a plant passport, which certifies that the plants have been grown in a place of production (such as a nursery and its surrounding area), an area or a country which is free of Candidatus Phytoplasma ulmi. (Pest-free areas or countries are defined by countries' own national plant protection organisations (NPPOs). The term ‘pest-free’ includes disease-free.)

An additional protection, which has been in place since 2014, is the requirement to notify pending landings of elm plants to the UK plant health authorities, to enable inspection.

The requirement to notify pending imports from other parts of the European Union (EU) helps to gather intelligence about the trade, raise awareness, and facilitate targeted monitoring. After the 2013 event, the PHSI visited the nurseries involved in trading elms, to raise awareness and encourage early reporting of suspected symptoms.

Targeted surveillance by the plant health and forestry authorities* continued to assess whether the pathogen was present elsewhere, and to assess the potential role of insect vectors which could spread the disease.

A continuing programme of surveillance monitors the condition of our remaining elm trees in the wider environment. Maintenance of the UK as a protected zone is conditional and dependent on our not finding that the disease has become widely established.

The disease was first recorded in the United States. The elm plants involved in the 2013 UK case had been especially bred in continental Europe for resistance to, or tolerance of, Dutch elm disease. They had been imported for use in projects to protect rare butterflies which depend on elm trees. Because elm yellows has been reported in parts of continental Europe, it is possible that the plants had been exposed to C. Phytoplasma ulmi.

Because these resistant elms might have considerable conservation value for some rare butterfly species, the establishment of elm yellows in the UK could undermine conservation work to use these trees in this context. It could also provide a pathway for the disease to spread to native and naturalised elms here.

There are elm breeding programmes in France, the Netherlands, Italy and the United States. Disease-free material from these programmes can be imported and propagated in the UK. In light of this development, we encourage people involved in the plant trade to: