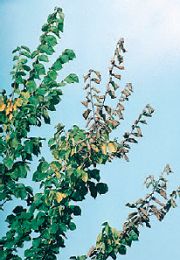 Not reportable – see ‘Report a sighting’ below

Dutch elm disease is a highly destructive disease of several species of elm (trees in the Ulmus genus). It is caused by two related fungi, Ophiostoma novo-ulmi and Ophiostoma ulmi, although almost all cases are now caused by O. novo-ulmi. The fungus is spread from tree to tree by elm bark beetles.

It has killed tens of millions of elm trees in the United Kingdom since O. novo-ulmi was accidentally introduced, probably during the 1960s.

Dutch elm disease occurs in all parts of the UK, and is also present in continental Europe, North America and New Zealand.

Our main native elms, ‘English‘ elm (Ulmus procera), smooth-leaved or field elm (U. carpinifolia or U. minor) and Wych elm (U. glabra), are all susceptible to O. novo-ulmi infection, as are several other species of elm.

English elm has sustained the greatest losses, not because it is more susceptible to infection than the others, but because it is the preferred food species of the beetles which spread the fungus. (See ‘Our research’ below.)

Species in the related Zelkova genus of trees, which are native to southern Europe and parts of Asia, are also susceptible to O. novo-ulmi infection.

Dutch elm disease has already demonstrated its ability to cause huge damage to elm populations. Large elm trees were a common and much-loved feature of the British countryside, but comparatively few large specimens now remain.

The losses have not just been to landscapes, but also to biodiversity and hardwood timber users, elm timber being attractive for several uses, including flooring, furniture and ornamental items.

Several English elm trees can grow from a single root system. When an English elm is killed by the disease, some roots remain alive and new elms regenerate from these roots. A single dead elm is therefore often replaced by a thicket of vigorous young elms growing from these roots.

Other elm species reproduce from seed, and are prolific seed producers from an early age. Seedling elms grow rapidly.

So although not many large elms remain in the UK, there are millions of smaller, young elms growing around the countryside, especially in hedgerows. Unfortunately once the young elms reach a certain size they can be detected by the beetles which spread the fungus, and many of them become infected and die.

The main hope for restoring large elm trees to our landscape lies in identifying and breeding genetic variants which are resistant to, or tolerant of, the fungus. See ‘Management and control’ below. 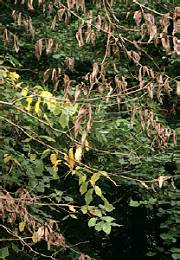 Because Dutch elm disease is progressive, an affected tree can have a mixture of healthy foliage, yellow or brown foliage, and defoliated shoots, showing infection in different branch systems. 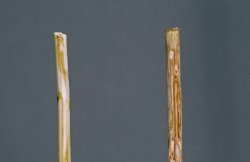 The disease can be confirmed by peeling the bark away from symptomatic live twigs, which will show dark brown or purple, longitudinal streaks in the outer wood (above). Cutting across the twig should reveal a ring of dark brown staining in the outer wood. This brown streaking might not be present in all affected branches, especially in lower branches of large trees.

Further guidance for identifying the disease is available from this information sheet.

There is no requirement to report suspected cases of DED to the forestry or plant health authorities, who now have extensive knowledge about the disease, its distribution, and methods of minimising its spread and impact.

A diagnosis of an unhealthy elm tree, and/or advice on managing it, can be requested from our Tree Health Diagnostic & Advisory Service (THDAS). Please note that there is usually a fee charged for its services.

The fungus is spread from infected trees to healthy trees by elm bark beetles, especially beetles in the Scolytus genus. A major vector (agent of spread) in the UK and continental Europe is the large elm bark beetle (Scolytus scolytus).

The tree reacts to infection by the fungus by plugging its own xylem tissue with gum and tyloses, which are bladder-like extensions of the walls of the xylem cells. Xylem is a form of vascular tissue which delivers water and nutrients from the roots to the rest of the plant. The plugs prevent water and nutrients from travelling up the trunk of the tree, thereby starving it and eventually killing it.

There is no effective cure available, but early sanitation felling, or removal of infected trees and branches, can slow the spread of the disease. This has been effective in helping to retaining good populations of mature elms in some places in Britain, especially in Brighton, Sussex, England.

Fungicides, tree vaccines and chemical and biological controls have been or are being developed. However, these treatments have limitations, such as expense, difficulty of application, and the need for them to be repeated, sometimes every year. Their use is therefore likely to be limited to individual trees, or small groups of trees, of high cultural, heritage, landscape or amenity value.

Some work is being done in the UK and in continental Europe to identify and breed elms trees which show resistance to, or tolerance of, the fungus, including tolerant hybrid cultivars. The main British organisation working in this area is the Conservation Foundation.

Pending importations of elm plants into England and Wales must be notified to the Animal & Plant Health Agency (Apha) to enable inspection for pests and diseases. This requirement is to protect the UK from accidental introductions of elm yellows disease.

Imports into Scotland must be notified to the Scottish Government’s Horticulture & Marketing Unit: email: hort.marketing@gov.scot; tel: 0131 244 8923; and

Certain local authorities have legal powers under the Dutch Elm Disease (Local Authorities) Order 1984 to take steps to prevent the spread of the disease in their areas.

Officers who suspect the presence on any premises of elm trees with DED may, on production of their authority, enter land to inspect trees and take samples. Where the disease is present, officers may either take action themselves, or they may require the owner or occupier to do so, to prevent or slow the spread of the disease. This is usually by destroying the tree, usually by burning it on site. Exceptionally, they may authorise the removal of the tree to another place for destruction.

We have shown that O. ulmi and O. novo-ulmi have spread across Europe, North America and central Asia in two major migratory events.

Our research has established that the two pathogens cannot co-exist when their ranges overlap. When that happens, O. ulmi is eliminated, although transient hybrids of the two species are often formed. This has enabled O. novo-ulmi to acquire useful genes from O. ulmi, and has been the driver for rapid evolutionary change.

There are two sub-species of O. novo-ulmi: O. novo-ulmi americana and O. novo-ulmi novo-ulmi. They hybridise freely in Europe when they come into contact with each other, having invaded the continent in a ‘pincer movement’.

Ds RNA viruses, known as d-factors, debilitate both pathogens. A collaboration with Scion, New Zealand, has explored the potential of these viruses to act as bio-control agents of O. novo-ulmi.

We have also found that the beetles that spread Dutch elm disease fungus have distinct feeding preferences for certain species of elm. Their favourite in the UK is English elm, and their least preferred is Wych elm. If a Wych elm is infected it actually succumbs more readily than English elm, but Wych elms often avoid infection because the beetles feed on them less, and so they are considered to have ‘field resistance’. Therefore even susceptible elms can sometimes escape the disease if they are unattractive to the beetles and there are more-attractive species nearby.

The geographic origins of both Dutch elm disease pathogens remain uncertain, although the available evidence suggests that Ophiostoma ulmi could be endemic to Japan.

Dutch elm disease (DED) was first observed in north-west Europe about 1910, caused by O. ulmi. It is called ‘Dutch’ elm disease because the fungus was first described by Dutch scientists, although it is believed to be of Asian origin. (There is also a species of elm called Dutch elm (Ulmus x hollandica), but it has no connection with the naming of the disease).

This first epidemic had died down by the 1940s after causing losses of between 10 and 40 per cent of elms in a number of European countries. It is thought the fungus died down because of its susceptibility to viruses.

A second and much more destructive outbreak of the disease began in the 1960s. The new outbreak was caused by the different and much more aggressive fungus, O. novo-ulmi, which had been introduced into the UK on imported, infected elm logs from North America.

Within a decade about 20 million mature elms were dead out of an estimated UK mature elm population of more than 30 million. By the 1990s the number was probably well over 25 million, and has since probably exceeded 30 million. The new epidemic took rapid hold, especially of English elm trees, in lowland regions of central and southern Britain during the early to mid-1970s, leading to the deaths of most of our mature English elms by the early 1980s.

More information about the history of the disease is available at this page. 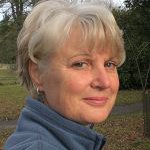