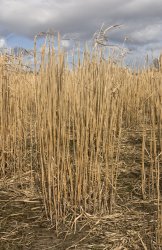 Although short rotation coppice (SRC) can offer a harvest cycle of 2-5 years, it is still a very different crop from those with which most UK farmers are familiar, and does not give an annual return.

There are, however, grasses and other plants that can offer high yield on an annual basis, and that are being studied for use as energy crops in the UK.

At present the best established, and the onepreviously eligible for support under the Defra Energy Crops Scheme (ECS) is miscanthus. However there are a number of other possibilities.

Rhizomatous grasses retains a large proportion of the nutrients in the rhizomes, retaining little in the biomass, so nitrogen and nutrient requirements are very low, and no yield benefits are obtained by applying nitrogen.

Miscanthus uses the C4 photosynthetic pathway, which can make it efficient in fixing carbon and in water use. They are not native to the UK, originating from Asia, but even under UK conditions have been shown to give very high yields (14 oven dry tonnes per hectare per year (odt)),which is higher than those obtainedfrom short rotation coppice (SRC) (9 odt).

The calorific value of miscanthus is slightly lower than that of most wood, and the ash content quite high, similar to straw.

Miscanthus (Miscanthus giganteus) can be planted by rhizome division, and this is the preferred way, though it makes establishment expensive. Conventional agricultural equipment, such as a potato planter can be used, although specialized equipment has been developed.

It is planted in spring at a density of 20,000 per ha and grows strongly to 1-2 m by late August. From late July the crop starts to dry out so that when it is harvested in late winter, most of the leaves have died back, leaving canes of 10 mm diameter and relatively low moisture content. This first year’s growth gives poor yield, but in subsequent years greater height, typically 2.5-3.5 m can be achieved, and yield increases over the first 4-5 years.

Once established, a miscanthus plantation can be harvested annually for 15-20 years before needing to be replanted.

Yield depends on sunshine, temperature and rainfall, but miscanthus grows well on a range of soils, and yields of 12-14 t/ha can be achieved from the third year onwards, and even higher on good sites.

Harvesting is undertaken with a modified forage harvester, and moistures below 20% are easily achieved at harvest and can be left to dry further, in the swath, prior to baling.

The crop is then baled using a conventional baler to produce rectangular or round bales, depending upon the requirements of the application.

Grasses other than miscanthus have also been considered as potential energy crops in the UK and have shown high yields in trials. These include:

As grasses grown from seeds are much cheaper to establish than those grown from rhizomes (such as miscanthus), studies have been carried out to identify crops that can be grown from seed and reliably offer high yields in the UK. With non-native species, however, seeded grasses can present a potential threat of invasion and must consequently be viewed with caution.

Hemp as an energy crop

UK yields of 9-11 tonnes per hectare have been achieved, comparable with other specialist energy crops, however high nitrogen availability was required to achieve this. Significantly higher yields, up to 25 t/ha, have been achieved in the Netherlands.

However, the wide range of potential co-products available from industrial hemp offer a flexibility not available from many other dedicated energy crops.

Other uses for hemp

Hemp (Cannabis sativa) cultivation around the world, mainly as a fibre crop, goes back at least 6,000 years, and has been grown in the UK for centuries.

Hemp has provided fibre for rope, canvas (the word canvas derives from cannabis), clothing, paper, animal bedding and composite materials for the automotive and building industries.

Hemp seed is also used for food, hemp oil is of very high nutritional value and has been used for paints, cosmetics and can be used as a feedstock for biodiesel.

Industrial hemp is grown under licence in the UK and contains very low levels of the psychoactive THC (tetrahydrocannabinol) found in narcotic strains of the plant.