Not reportable – see ’Report a sighting’ 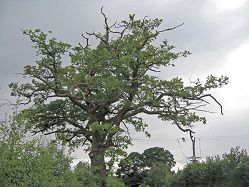 Chronic oak decline (COD) is a complex disorder or syndrome of oak trees (trees in the Quercus genus) in which several damaging agents interact either simultaneously or sequentially to bring about a serious, long-term decline in tree health and condition.

It is different from acute oak decline, which causes a much faster, and usually fatal, decline in tree health, is associated with a particular suite of damaging organisms, and produces characteristic weeping cankers, or lesions, in the bark.

Chronic oak decline can be found at many locations across Great Britain.

Chronic oak decline can affect a number of species of oak, but pedunculate or ‘English’ oak (Quercus robur) tends to be the most commonly affected.

Pedunculate and sessile (Q. petraea) oak trees are among our most numerous native tree species, and are important for a wide range of reasons: they provide valuable hardwood timber, and habitat for hundreds of other species; and they are iconically important in British history, culture, literature, art and landscapes.

Chronic oak dieback on its own does not currently (2020) pose a serious threat to the United Kingdom’s overall oak tree population, and trees often recover if the causative factors decline.

However, our oaks are under pressure from a variety of threats in addition to chronic oak decline, and without management these combined threats could cause significant damage. These include acute oak decline and oak processionary moth, exacerbated from time to time by environmental stresses such as drought and flood.

The highly damaging water mould organism Phytophthora ramorum can infect our native oaks, but it is not currently causing any significant damage to them. However, two genetic variants of it are causing serious damage to populations of North American oak species in western states of the USA. This poses the risk that if one or both of the North American variants entered the UK, and/or if the variants already present here were to mutate or hybridise to produce a more virulent variant, P. ramorum could become much more of a threat to our oaks.

Death can result if the dieback becomes extensive, especially if secondary factors such as damaging insects, fungi or bacteria also affect the weakened tree.

One organism frequently associated with tree deaths and the later stages of chronic oak decline is Armillaria, or honey fungus (above).

There is no obligation to report suspected cases of chronic oak decline to the plant health authorities. However, it can help our monitoring of the condition if you report suspected cases in Great Britain (England, Scotland and Wales) to us with our TreeAlert disease reporting tool. Please note that TreeAlert requires one or more photographs of the symptoms to be uploaded.

If you own or manage oak trees displaying any of the above symptoms you may request a diagnosis of their condition from our Tree Health Diagnostic & Advisory Service (THDAS). Please note that there is usually a fee for this service.

This disorder is widespread, prolonged and complex.

The causes often also involve biotic factors such as opportunistic attacks from damaging insects, fungi and bacteria on the weakened trees, which can exacerbate the decline and sometimes lead to the death of trees which might otherwise have recovered.

See the Manion disease spiral for a graphic showing how the various factors can interact.

Predisposition to the conditon is considered an important aspect.

There is a limit to what can be done to help a tree suffering COD. It might be possible to improve the soil drainage and reduce soil compaction, if these are thought to be contributing factors.

Physical damage to the tree might be mitigated by judicious surgery and application of wound paint to prevent damaging pathogens entering the tree through the wound.

Application of an approved insecticide or fungicide might help to reduce insect or fungal attack, and buy time for the tree to recover.

However, the best thing for ensuring good tree health is to plant them on sites suited to their needs in terms of soil type, rainfall, drainage, sunshine hours, wind strength, air and ground temperatures, and so on. Seed of local origin should produce trees which are best adapted to local environmental conditions. Planting should be followed by silvicultural and biosecurity good practice, particularly while the trees are young.

Taking these steps will minimise the stresses the trees are likely to be subjected to, which in turn minimises the risk of their suffering conditions such as chronic oak decline.

Forest Research has studied the role of different agents in oak dieback.

We use a multi-disciplinary, holistic approach to investigating the environmental factors that weaken trees or predispose them to being susceptible to chronic oak decline.

British oaks have been periodically affected by decline and dieback since the 1920s. The 1920s episode was attributable to successive events of first-flush defoliation in spring by caterpillars of the oak roller moth (Tortrix viridana), followed by mildew attack on summer recovery foliage.

The most serious recent episode of decline occurred in 1989–1994, when drought damage weakened trees which were then attacked by the two-spotted oak buprestid beetle (Agrilus biguttatus), frequently leading to tree deaths.

Reported cases of oak decline are widely distributed. Since 2002 there has been a significant increase in reported sites with rapid and severe decline, especially in Southern England and South-East Wales, and these are usually cases of acute oak decline.