Reportable in trade – see ‘Report a sighting’ below

It is also known as red band needle blight because of the colourful symptoms it shows on pine trees, as in the picture above.

A very similar disease can be caused by a related pathogen (disease-causing organism) called Dothistroma pini, but this is not thought to be present in the UK.

As of 2022, trees in the other main conifer genera used in British forestry, such as larches (Larix species), firs (Abies spp.), hemlocks (Tsuga spp.), spruces (Picea spp.) and Douglas fir (Pseudotsuga menziesii), continue to appear to have low susceptibility.

Trees of all ages can become infected. Symptoms are first seen at the base of the crown on older needles. Infected needles typically develop yellow and tan spots and bands, which soon turn red. Then, as the disease progresses, the ends of the needles turn reddish-brown while the needle base remains green.

It is within the red bands that the small, black, spore-containing fruit bodies tend to be found, with symptoms being most apparent in June and July. Spores are released from the fruit bodies during this period, leading to infection of the current year’s needles.

After this point, the symptomatic needles are shed, and branches can acquire a ‘lion’s tail’ appearance typical of the disease, with only a tuft of the recently infected current year’s needles remaining at the branch ends. This defoliation can continue year on year and gradually weaken the tree, significantly reducing timber yields (see picture below) and causing the death of the tree.

The narrow annual growth rings at the perimeter of the section of log pictured above show the significant reduction in yearly diameter (and therefore timber) increment of Corsican pine caused by Dothistroma needle blight. 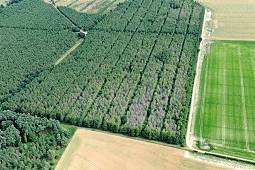 The discoloured trees in the picture above are Corsican pines killed by Dothistroma needle blight.

DNB mostly occurs in managed pine forests. UK foresters are trained to recognise and manage it, so we do not require reports of suspected cases in forests from members of the public.

However, findings of DNB in trade, such as in nurseries or garden centres, must be reported to the relevant plant health authority.

In all cases, provide precise details of the location and, if possible, clear photographs of the symptoms.

There is no statutory requirement to notify findings in woodland or on other mature trees. However, it is strongly recommended that woodland managers make themselves aware of the distribution and severity of DNB on and adjacent to their land so that appropriate management strategies can be put in place.

Moisture is required for natural dispersal of the fungus, and long-distance dispersal is thought to occur in moist winds and mists.

Movement of infected plant material, including infected needles on footwear, clothing, machinery and timber, could also spread the disease.

In other countries where the disease has had a significant economic impact, successful methods of control have tended to focus on fungicide treatments. However, the focus in the UK is on the use of resistant species and good stand management.

This particularly includes thinning of stands of pine trees in accordance with good silvicultural practice to promote air circulation in the tree crowns. This will help to reduce humidity levels in the crowns, thereby making conditions less conducive to fungus development. Although this will not prevent infection, it can help to reduce the impact. No-thin regimes and delayed first thinning have been shown in public forests to lead to significant numbers of tree deaths.

There are no plant protection products with approval that can be used in infected forest stands. However, use of copper-based fungicides is permitted in amenity situations, and this can suppress the symptoms and might be a realistic option for individual or small groups of specimen trees.

The main research areas have been:

Our research was funded by:

Forest Research was also the proposer of the European COST Action FP1102DIAROD (see link above), which ran from December 2011 to December 2015.

Until the 1990s DNB was primarily of concern in the Southern Hemisphere, particularly on radiata pine (Pinus radiata). However, since the 1990s there has been a rapid increase of its incidence in Europe and North America.

The status of the disease has changed markedly in the UK since the late 1990s. From being rarely seen, it is now found in many forests growing susceptible pine species. In 2006, 70 per cent of the Corsican pine stands inspected in Great Britain (England, Scotland and Wales) had the disease, and it is estimated that 44 per cent of these infected stands had crown infection levels greater than 30 per cent.

Lodgepole pine and our native Scots pine have since also been affected. Corsican and lodgepole pine are now usually replaced by other, more-suitable species after they have been harvested.

The loss of Corsican pine as an option for commercial softwood timber production is unfortunate because it was expected to be well adapted to the climate changes predicted for southern and eastern Britain over the 21st century.

Further information on DNB and other shoot diseases of pine is available from the following publications.

The DIAROD programme aims to provide the required evidence base for Dothistroma needle blight (DNB) to enable its invasiveness and associated risks to be determined, and hence help prevent its spread, and better enable countries to manage this and future outbreaks of other pests and diseases.