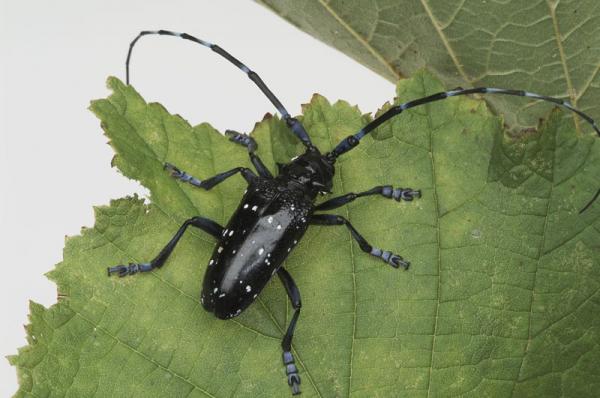 The citrus longhorn beetle (CLB) is a non-native, wood-boring, cerambycid beetle which is extremely damaging to a wide range of broadleaved tree and shrub species. These include several species native to the United Kingdom (UK), and several which are grown for commercial and amenity purposes here.

It is a quarantine pest for the European Union (EU), and beetles have been found around the world in ornamental trees exported from Asia.

It is also known as the black and white longhorn beetle and the citrus root cerambycid.

There have been outbreaks (breeding populations) in several European countries.

There have been no known outbreaks of the beetle in the UK. However, there have been numerous interceptions of individual beetles here since 2005, as well as in continental Europe, demonstrating that there is a significant threat to the UK. Most of the beetles found in the UK were associated with Japanese maple trees (Acer palmatum) imported from China.

There have also been interceptions of individual beetles in the USA.

Citrus longhorn beetle can attack a very wide range of deciduous tree and shrub species, including several species native to the UK. (See ‘Susceptible species’ below).

This means that its introduction and establishment in the UK could pose a serious economic threat to our forestry, fruit growing and other horticultural industries, and to our native trees and woodland, disrupting woodland ecology and biodiversity. Some of the species it can attack, such as plane trees (Platanus species), are popular amenity trees in towns and cities, so some of our urban landscapes could be threatened as well.

The larval (grub) stage of the beetle’s life cycle is the most damaging, because the larvae feed internally on the pith and vascular systems of the lower trunk and root.

The tunnels created by their feeding leave trees weakened and susceptible to diseases and wind damage. The adults (beetles) can cause more-limited damage by feeding on foliage and eating young bark. Compounding the problem is that the pest spends most its life cycle concealed inside the tree or shrub, with little external evidence of its presence until after it has done most of its damage.

Outbreaks in EU Member States in continental Europe have led to the destruction of thousands of mature trees, and eradication costs of millions of euros.

A European Commission emergency measure passed in 2008 to prevent CLB being accidentally introduced to the EU cited the following species of trees and shrubs known to be hosts of CLB.

Adult beetles (top picture) are large and black with variable white markings. Their bodies vary in length from 21mm for males to 37mm (0.8 to 1.5 inches) for females.

The antennae, or ‘horns’, are particularly distinctive: they are longer than their bodies (between 1.2 and two times the body length), and are black with white or light blue bands.

They are very similar in appearance to the related Asian longhorn beetle (Anoplophora glabripennis), another highly damaging pest of a wide range of tree and shrub species.

See ‘Life cycle’ below for details about the eggs, larvae and pupae. 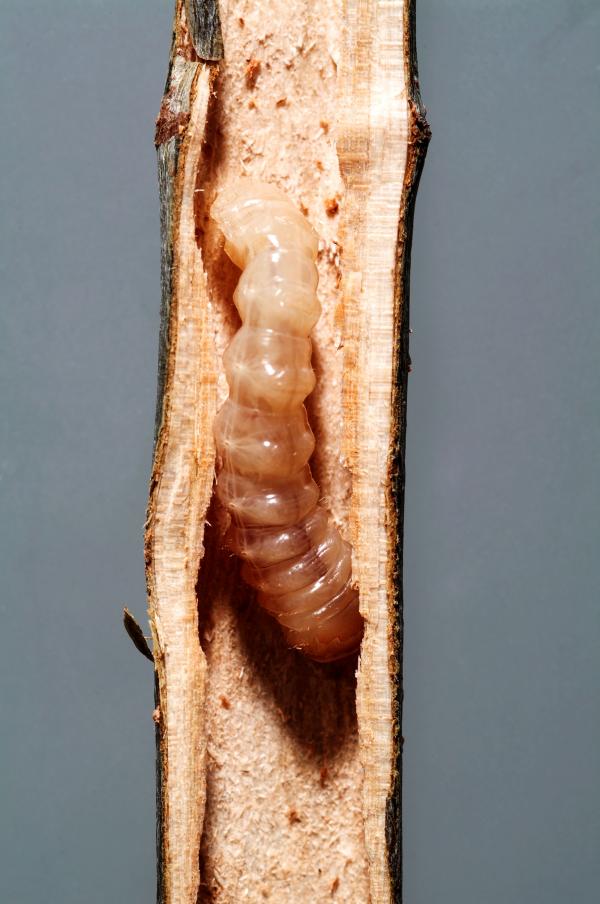 The species spends most of its life as larvae inside a trunk or root (above), so there can be few or no external symptoms of its presence. 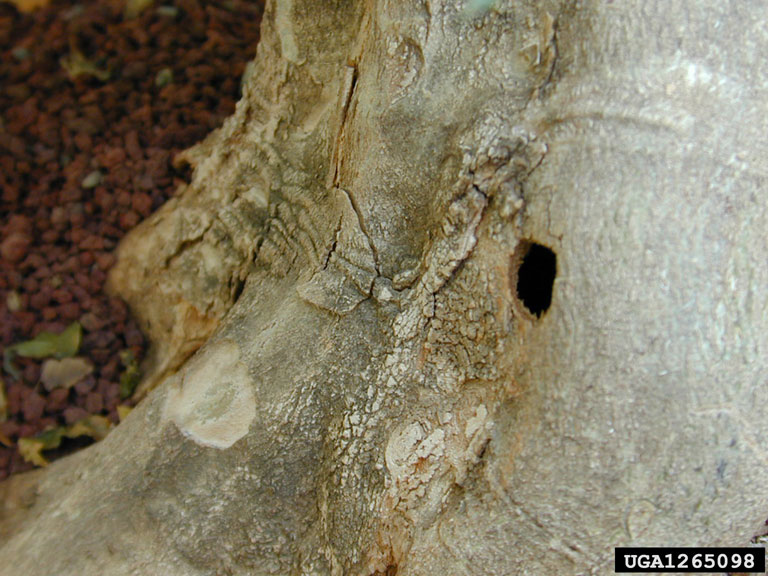 However, adult beetles make a distinctive circular hole (pictured) in the bark when they emerge from their larval and pupation stages. Typically 6-11mm wide (0.25 – 0.4in), the holes are mostly found towards the base of trunks and exposed roots. On smooth-barked trees they resemble drilled holes.

Other, less obvious symptoms include scars or slits on the bark at sites where eggs have been laid, and piles of frass (sawdust-like droppings) at the base of an attacked tree.

In thin-stemmed trees, bulges in the trunk can indicate the presence of a pupal chamber.

Note that TreeAlert and TreeCheck both require clear, well lit digital photographs of the pest and/or symptoms of its presence.

Suspected sightings, especially sightings within the plant trade, can also be reported:

If possible, catch any beetles you find and place them in secure containers such as sealed glass jars so that an inspector can collect them. The beetles are not harmful to people, but they should be handled with caution because they can nip, although the nip is unlikely to penetrate the skin or draw blood. For most people the nip is likely to be no more uncomfortable than a nip by one of our larger native beetles.

Citrus longhorn beetles’ life cycle can last one to two years in Asia. However, in the UK climate the life cycle would most likely be at least two years long, and more likely three or more years.

In summer, female beetles cut slits in the bark with their mandibles and lay their eggs in them. One female can lay about 200 eggs. The eggs are laid singly, and are about 6mm (0.25in) long.

The larvae emerge from the eggs between one and three weeks later. They are cylindrical, about 56mm (2.2in) long, 10mm (0.4in) wide at the widest point, without obvious legs, and pale yellowish white with a dark head.

When the larvae near maturity, which can be between one and four years after emergence from the eggs, they pupate for about four to six weeks before emerging from the tree as adult beetles. The pupae are found under the bark, and have legs and long, coiled antennae.

The adults emerge from pupation from April to August, mate, lay eggs and die.

CLB can be moved as eggs, larvae or pupae in woody planting material or finished miniature plants such as bonsai or penjing moving in international trade. Individuals (larvae and adults) have entered Europe and the USA on bonsai plants of Acer buergeranum, A. palmatum, Celastrus, Cydonia sinensis, Malus micromalus and Sageretia from China and Japan.

It is less likely to be spread in wood, such as packing crates.

See the UK Government website for guidance on the regulations designed to protect the UK from accidental introductions of plant pests such as citrus longhorn beetle.

Insecticide treatments are used in citrus orchards in China and Japan. The insecticides are sprayed on the tree canopy to kill adults, and at the base of the trunk to kill eggs and larvae.

Biological control has been used in Japan with nematodes and with pathogenic fungi. In particular, application of a formulation of the pathogenic fungus Beauveria brongniartii drastically decreased emergence of the pest in a citrus orchard. In China, chemical control was found to be unnecessary when colonies of the ant Oecophylla smaragdina are present in citrus orchards.

Physical barrier methods are also used. For example, covering the bottom of trunks with netting, sticky cardboard or 2cm fishing net can capture adults and prevent oviposition (egg-laying). Erecting wire netting and piling soil around the trunk base have also proved effective at preventing oviposition in citrus groves.

Any use of chemical and biological control agents to control CLB in the UK would be subject to our strict health, safety and environmental protection regulations. Any proposal to use biological control agents, such as pathogenic fungi or predatory insects, which are not already in the UK would first have to be rigorously risk assessed to ensure that the control organism itself would not be damaging in the UK environment and ecosystems.

The CABI website has further details about these control methods.

The action which would be taken in the event of a discovery of an outbreak of citrus longhorn beetle in the UK would aim to eradicate the outbreak. It would be likely to include: