Notifiable – see ’Report a sighting’ below 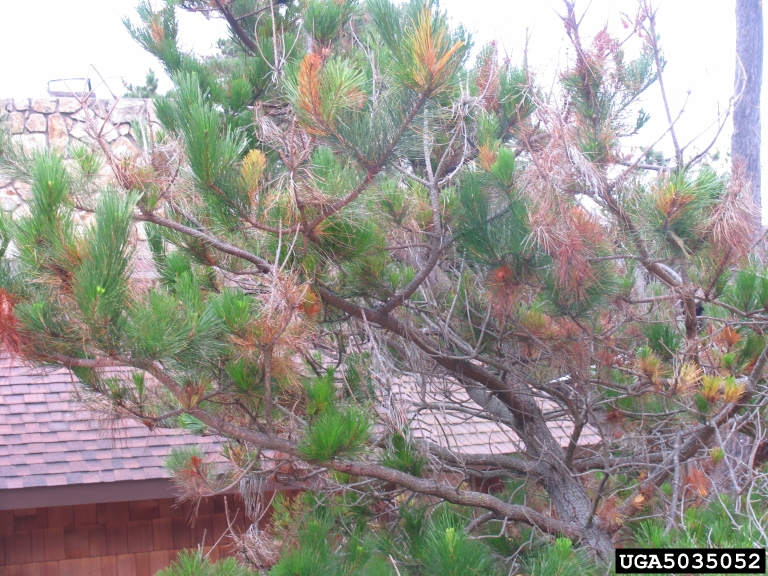 The disease has been reported on a wide range of pine species in several countries around the world.

It has been reported in 12 south-eastern states of the USA, as well as in the Monterey Peninsula and other coastal areas of California. Elsewhere in the Americas it is also present in Mexico, (where it might have originated), Haiti and Chile.

It has been reported from South Africa, but only in nurseries, and in Asia it is present in Japan, Korea and possibly Iraq.

It is a relatively recent arrival in Europe, and has been reported in nurseries and forests in France and Italy, from where it is now considered to have been eradicated, and Spain and Portugal. (See the European & Mediterranean Plant Protection Organization website for more details). Its occurrence in Europe is most common in coastal areas.

It is not currently known to be present in the United Kingdom.

It is considered that it could become established in the United Kingdom if it were introduced, because suitable host tree species and climatic conditions are present. The risk of its being introduced here has increased since its discovery in near neighbours and trading partners in continental Europe.

It is therefore considered that it would pose a threat to pine forests here. Of particular concern would be our forests of Scots pine (Pinus sylvestris), which is the UK’s only native pine species, and its ecologically important Caledonian pine variety.

Species such as Scots, Corsican (P. nigra) and lodgepole pine (P. contorta) are grown commercially for the timber trade in the UK, so there could be an economic effect on businesses and jobs which use these species. However, Corsican and lodgepole pine are usually being replaced by other species as they are harvested because of their susceptibility to another disease of pine trees, Dothistroma needle blight.

It has also been recorded on more than 30 other pine species, including:

There are occasional records on Douglas fir, but only associated with limited damage. However, infected Douglas fir trees can act as pathways for spreading the disease.

Infected seedlings show typical damping-off symptoms, although these can also be caused by other agents. Needles turn red, brown or chlorotic (pale, yellow, or yellow-white), and die from the base upwards, or the entire seedling dies.

Root infections are most often observed on seedlings in nurseries, but can also occur on exposed roots of larger trees in landscape plantings. Above-ground symptoms do not usually become apparent until the pathogen reaches the crown and girdles the stem, causing yellowing of the foliage. 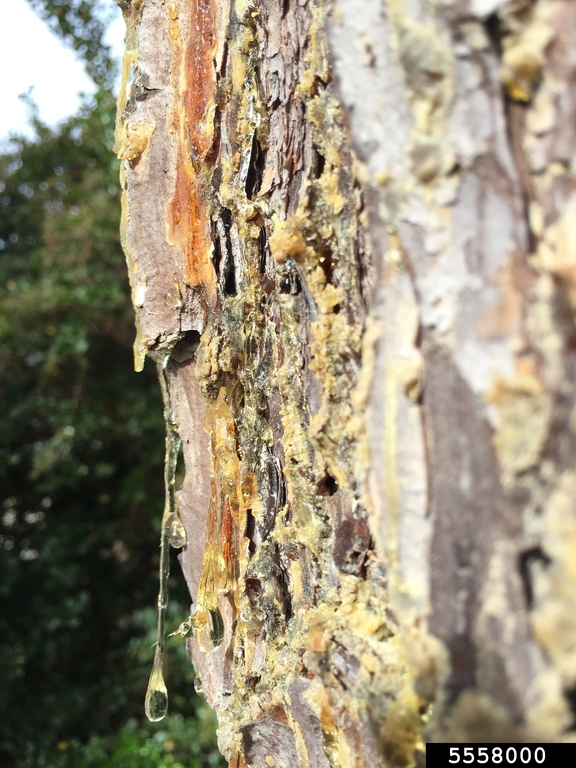 Resin-soaked tissue (above) might be observed after removing bark from the lower part of the trunk.

Symptoms of aerial infection include yellowing of the needles, which turn red over time and finally drop, and dieback of the shoots.) 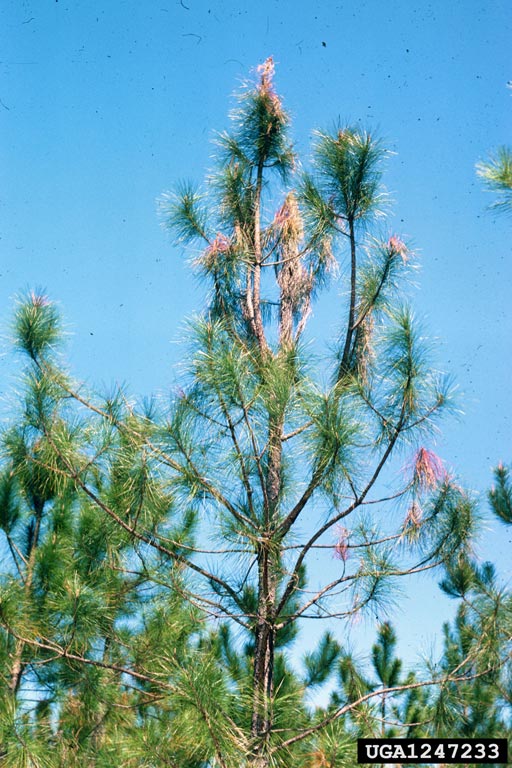 The female cones on infected branches can also become affected, and abort before reaching full size. Thereafter, cankers can appear on the shoots, on the main stems and even on the trunk, associated with resin bleeding.

Further help with identifying the disease is available in:

Although F. circinatum fungus is not known to be present in the UK, there is a risk of its being accidentally introduced, especially since its discovery in near neighbours and trading partners in continental Europe. We therefore urge the public, and particularly importers of wood and plant materials, and tree and plant professionals, to remain vigilant for signs of it, and to report suspicious symptoms immediately.

Anyone who suspects they have seen a case of pitch canker of pine in the wider environment (outside plant or wood trade premises) must report it immediately to the plant health authorities.

Note that TreeAlert and TreeCheck both require clear, well lit, digital photographs of the symptoms of the disease.

Spores are spread by wind or can be carried in fog or rain, entering trees or seedlings through wounds caused by hail, wind damage, branch removal or insect damage; or through the roots. The fungus can live for more than a year in wood.

Pitch canker of pine was added in 2002 to the EPPO* A2 action list of pests, and endangered EPPO member countries are therefore recommended to regulate it as a quarantine pest. It has since become subject to European Commission Decision 2007/433/EC, which invoked provisional emergency measures to prevent introduction into and spread within the EU. It includes legislation on plant imports and movement within the EU of soil, growing media and wood materials. APHA must be notified of any imports of pine into England from the EU as per the requirements of the The Official Controls (Plant Health and Genetically Modified Organisms) (England) Regulations 2019 or, in Scotland and Wales, legislation that applies there.

Seeds of pine species imported from countries where F. circinatum is present should also be free from the pathogen, and can be subject to specific tests. There is a risk of introduction with soil but, in general, most EPPO countries prohibit the importation of soil, and restrict the importation from other continents of plants with soil. These measures should be effective against pitch canker of pine.

Action to deal with a discovery of pitch canker of pine in this country would follow the Forestry Commission’s contingency plan (downloadable below).