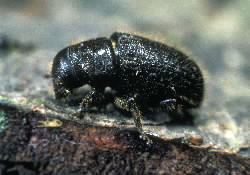 The great spruce bark beetle is a non-native pest of spruce and pine trees (species in the Picea and Pinus genuses) which, if left uncontrolled, could cause serious damage to the United Kingdom’s softwood timber industries. Sitka spruce (Picea sitchensis), Norway spruce (P. abies), Scots pine (Pinus sylvestris) and Corsican pine (P. nigra) are important species for these industries.

It is also known as the great European spruce bark beetle.

The pest is found in spruce trees in forests throughout mainland Europe as far east as Siberia, and in parts of Great Britain, including Wales, western England and southern Scotland. It has not been reported in Northern Ireland.

Great spruce bark beetles damage spruce trees by tunnelling into the bark of living trees to lay their eggs under the bark. The larvae which emerge from the eggs feed on the inner woody layers. This weakens, and in some cases can kill, the tree.

The rate and extent of damage to individual trees and forests is variable. Neither the beetle nor its larvae burrows into the wood itself, so the timber will not be spoiled if the wood is salvaged before the tree is dead.

Trees are killed by being girdled at one or more points along the stem, although this might take several years of sustained attack. However, large breeding populations can be building up long before individual trees are killed, creating a risk of spread to nearby trees.

It has also been observed attacking pine trees in Siberia and some Baltic countries, but this appears to be rare in Britain.

Poor tree health can be a sign of the beetle’s presence. Forest managers should check especially for isolated or small groups of dead or dying trees characterised by browning foliage over some or all of the crown (below). 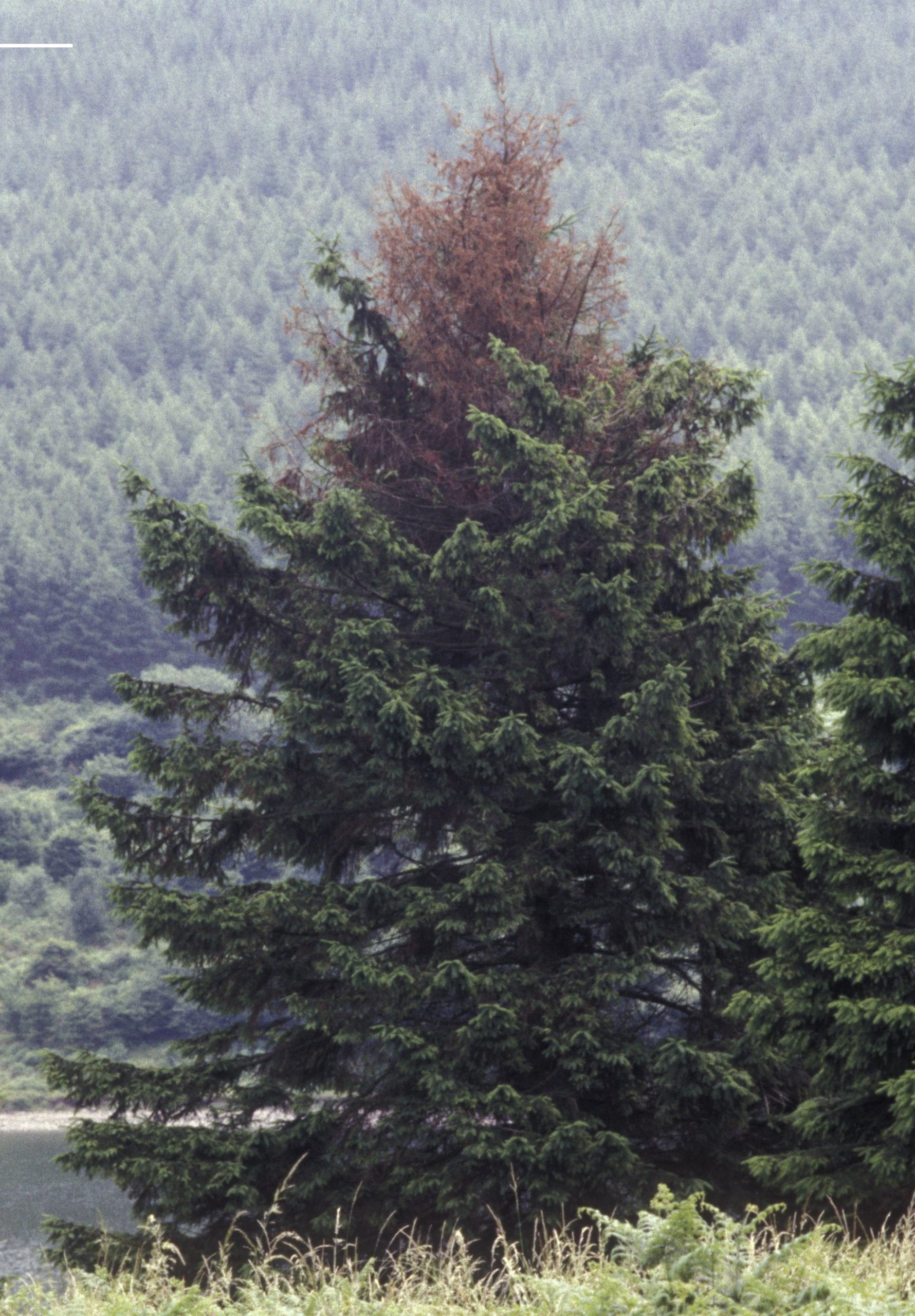 The entry of female beetles into the bark of trees gives rise to characteristic resin bleeds and 'resin tubes’ on the trunk (below). Resin tubes and granular resin at the base of the tree are reliable signs of stem or root attack. Resin tubes vary in colour from white and cream to shades of purple and brown. They might be accompanied by copious resin bleeds.

Loose bark with exposed galleries usually indicates older infestations which have been attacked by woodpeckers.

Inspect the bark around resin tubes, particularly those which are purple to brown. A hollow sound when the bark is tapped often indicates successful attack.

Remove the bark carefully and inspect for signs of the beetle. The most characteristic indicator is the presence of a mixture of insect faeces (frass) and bark packed into ‘islands’, creating a quilted appearance. All beetle stages, from egg to adult, might be present.

Adult beetles are 6 to 8mm (0.25in) long and 2.5 to 3mm (0.1in) wide. Newly emerged adults are light brown, but as they mature they darken to brown and black, with a covering of orange hairs. The large size of the beetle enables the females to withstand the resin flow produced when they bore into the bark of trees. 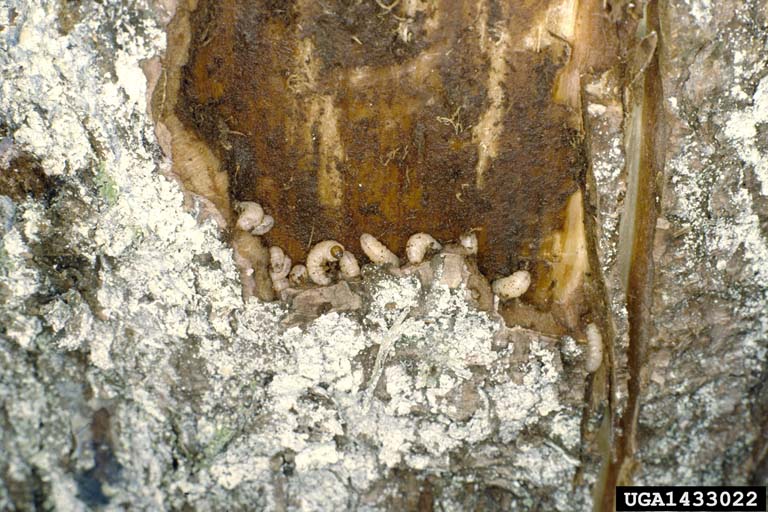 Larvae (above) of all stages feed under the bark in a similar, side-by-side manner, packing powdery wood debris (or ‘frass’) and diseased or dead larvae behind them into islands away from the main feeding site. The mixture of resin and frass forms a distinctive quilted pattern.

Pupae are found in pupal cells among the larval frass. They are often found in close proximity and give rise, upon emergence, to aggregations of adults under the bark.

More pictures to aid identification are available in the Practice Note Minimising the impact of the great spruce bark beetle . (Note that where web and email addresses and telephone numbers in the practice note and on this page differ from each other, use those which appear on this page.)

who will arrange for an assessment and treatment if necessary. (See 'Management and control' below.)

Members of the public, such as forest visitors, who suspect they have seen evidence of spruce bark beetle activity in Great Britain should report it to us immediately with our TreeAlert pest reporting tool.

Note that TreeAlert and TreeCheck require digital photographs to be uploaded.

It is not possible to eradicate great spruce bark beetle from Great Britain. However, effective biological control can be achieved by releasing the predatory beetle Rhizophagus grandis (R. grandis) into areas of forest where the pest has been found.

R. grandis predates solely on great spruce bark beetles, and it has an extraordinary ability to locate them, even when there might be only a few infested trees.

More-detailed information about managing infested trees is in the guidance document 'Minimising the impact of the great spruce bark beetle'. (See link in 'Identification and symptoms' section above).

See also Pest management with Dendroctonus micans for more background information about the use of R. grandis.

Statutory controls against the spread of great spruce bark beetle were put in place in Great Britain in 1982. Following the discovery of three new outbreaks outside the main infested area, the Forestry Commission (which at that time was the forestry authority for all three countries of Great Britain) reviewed the controls and consulted the forestry industry on an option of:

The second option was agreed, and from 15 May 2005 movements within Great Britain of conifer wood and bark have no longer been subject to any treatment requirements.

Part of the west of Scotland is designated as a ‘pest-free area’ (that is, an area free of great spruce bark beetle), out of which wood and bark can be moved without treatment under the EU plant passport regime.

Northern Ireland is an EU protected zone for this pest, meaning that imports of conifer wood and bark into Northern Ireland must meet certain plant health requirements. These requirements are explained in the Practice Note 'Minimising the impact of the great spruce bark beetle' (see link in 'Identification and symptoms' section above) and on the UK Government website.

The great spruce bark beetle’s life cycle can range from 12 to 18 months under British conditions. This results in extensive overlap of generations, so that it is possible to find any stage at any time of year. However, there are periods, particularly in the winter, where most can be at the same stage.

Eggs are laid within a small egg chamber in the cambium of the tree. Each female can produce up to 300 eggs, laid in groups of 50 to 80, in interconnecting chambers. Eggs are usually laid on one side of the chamber.

The larvae which emerge from the eggs go through five developmental stages, or instars, each one larger than the previous one.

Pupae are the immobile, resting stage of development before the larvae moult to the adult stage. These stages can be prolonged over several weeks or months, depending on temperature.

Apparently a native of the northern Eurasian landmass, great spruce bark beetle has spread steadily over the past 100 years or so, probably as a result of increasing trade in timber. It is now distributed throughout the spruce-growing areas of continental Europe, demonstrating a remarkable ability to adapt to a wide variety of climatic and forest conditions.

It was first discovered in Great Britain in 1982, when it was identified as the cause of deaths of Sitka spruce trees in Shropshire, England. Subsequent research later found evidence that it had been breeding in Shropshire as early as 1972. It was most likely accidentally introduced with a consignment of imported timber, and became an established pest in Wales and western England before expanding its range to southern Scotland.