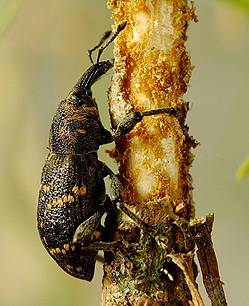 The large pine weevil (above), also known as the large brown pine weevil, is, despite its name, an insect pest of many species of young trees in addition to pine trees (in the genus, Pinus). It is a particular problem in the UK and other parts of Europe during the first five years after restocking (replanting) of commercial conifer forests, and occasionally also of recently restocked broadleaved forests.

It is especially destructive of seedlings of pine and spruce (Picea genus), some species of which are widely grown in the UK for the softwood timber market.

Large pine weevil is found in all parts of the United Kingdom, and across most of northern Europe and Russia as far south as Armenia and Turkey. There are sporadic Asian records from Kazakhstan, China and Japan, and it has been recorded in New Zealand, but is now believed to be absent there.

Many species of young conifer and broadleaved tree are susceptible to attack by the large pine weevil.

In the UK the main conifer species (trees with needles and cones) used in commercial forestry and at risk are our native Scots pine (Pinus sylvestris) as well as Sitka spruce (Picea sitchensis), Douglas fir (Pseudotsuga menziesii) and western hemlock (Tsuga heterophylla). Corsican pine (Pinus nigrus), lodgepole pine (Pinus contorta) and Norway spruce (Picea abies) also grow here and can be severely damaged, but they now tend to be replaced by other, more-suitable species after harvesting.

Large pine weevil can cause significant damage to newly planted, immature forests during the first five years following restocking if the sites are left unmanaged.

The adult beetle feeds on the bark of living trees and other woody plants, with a preference for the bark of young trees. Its feeding damage can kill a young tree if it girdles the stem (trunk), and a large population of weevils can kill thousands of young trees on a newly restocked site.

The pest can destroy an average of 50 per cent of young, planted conifer trees on a restocked site where they are unprotected. In worst-case scenarios it can destroy all of them, even in some cases where attempts have been made to protect them using insecticides.

The biggest threat is to the UK’s softwood timber-growing industry. It particularly threatens the establishment of replacement crops of conifer trees such as pines, spruces, firs and hemlocks planted or regenerated after the previous crop has been harvested. Hundreds of millions of pounds worth of investment and thousands of jobs in the nursery, forestry, timber haulage and timber-processing industries depend on the UK’s conifer forests and their good health. It is therefore essential that forest and woodland managers remain constantly alert for this pest and take appropriate and timely action to keep the damage down to acceptably low levels.

See 'Management and control' and 'Related materials' below for links to advice and guidance for forest managers.

Adult large pine weevils are often unseen because of their largely nocturnal habit, although they can sometimes be seen during daylight, especially when population densities are high. They can be found throughout the year, but less often in the winter because of long periods of inactivity spent below ground.

Adult weevils are about 10 to 13mm long (not including the elongated ‘snout’ or rostrum), and are dark brown with patches of yellow or light brown hairs arranged in irregular rows on the abdomen/wing cases. The legs are black or deep red with a distinctive tooth on the femora (the segment of the leg nearest to the body) and at the end of the tibiae (lower leg). 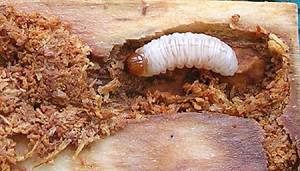 Fully grown larvae (above) are cream-coloured and soft bodied, with a hardened brown head. They reach 14 to 16mm in length, are curved in shape, and legless.

Adult presence is typically recognised by feeding damage to the bark of live young trees, appearing especially between April and September. This damage takes the form of patches of removed bark (known as feeding scars), which can lead to deformed or killed seedlings.

UK foresters are trained to be alert for large pine weevil, and how to control it, so we do not require reports of suspected sightings from members of the public.

After hatching from the eggs, the larval and pupal stages of its life cycle occur within the stumps without causing any harm.

When the adult emerges from pupation it walks or flies to living trees and other woody plants to feed. The nearest living trees are often the young ones planted, or allowed to regenerate, to replace the felled trees, so thousands of stumps and young replacement conifer trees can be present together on the same site. is gives rise to the threat to re-establishing conifer crops on restocked sites.

However, the adults can travel up to two kilometres in a few days, so if the immediate site has no young trees on it, nearby recently restocked sites, and any other young trees in the vicinity, are at risk.

Effective control can be achieved by the use of one of the following methods, or more than one of them in combination: applying insecticides, debarking stumps, removing stumps, biological control using natural predators, restocking sites with weevil-resistant plants, timing felling and replanting to avoid peaks of weevil activity, letting harvested sites lie fallow for a period before restocking them, and using natural regeneration instead of replanting to restock sites. (Naturally regenerating sites are less susceptible to large pine weevil damage than planted sites.)

However, not all of these methods can be deployed on all sites. Factors such as cost, terrain, accessibility and site suitability will influence decisions about which ones are practicable, and in what combination.

See 'Related materials' below for our advice and guidance for forest managers on recommended methods of control.

Forest Research has led work to develop non-chemical and reduced-chemical means of dealing with large pine weevil. One outcome has been the on-line Hylobius management support system (MSS), which forest managers can use to work out a cost-effective, integrated management strategy tailored to their circumstances. It resembles similar systems used in agriculture, and users can access it with an annual subscription. See ‘Related materials’ below.

Our scientists contributed to a paper published in the journal Forestry in June 2020 entitled 'Are there viable chemical and non-chemical alternatives to the use of conventional insecticides for the protection of young trees from damage by the large pine weevil Hylobius abietis L. in UK forestry?'