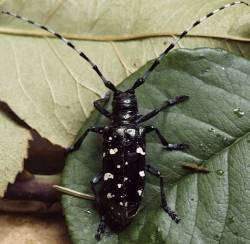 Asian longhorn beetle (ALB) is a highly destructive insect pest which poses a serious threat to a wide range of broadleaved trees outside of its natural range in China and neighbouring countries. Some of the trees which it can damage are forest and woodland species.

Asian longhorn beetle is not known to be present in the United Kingdom, although one outbreak (breeding population) was found in Paddock Wood, Kent, England, in 2012. It was subject to rapid eradication action, and annual surveys since then have found no evidence of a continuing presence. There have also been occasional interceptions of individual beetles in the UK.

A native of Asia, it has become established, and caused significant damage, in parts of North America since being accidentally introduced there in the 1990s. Since 2000 there have also been outbreaks in several European countries, incuding Italy, some of which are still subject to eradication action.

The larvae, or grubs, of ALB feed on the wood of living trees, boring galleries, or tunnels, in the trunks and branches as they feed. The galleries can penetrate all the way from the outer, or cambium, layer to the heart wood, and a severe infestation can kill the tree.

Compounding the threat is the fact that ALB can infest a wide range of bread-leaved trees, including species grown commercially for timber and fruit production – see ‘Susceptible species’ below. Its destructiveness means it has the potential to significantly alter and disrupt forest and woodland ecosystems if it became established, as well as disrupt economic activity.

Analysis of climate data suggests that most of England and Wales and some warmer coastal areas of Scotland are suitable for its establishment, but south-east England and the south coast are at greatest risk.

The larvae need living wood tissue, but they can survive in the wood of freshly felled trees. They do not live in dead wood, such as the wood in houses.

Known hosts (tree species which ALB can infest) include:

In the 2012 outbreak, out of the 2229 trees which were felled and investigated:

Most ALB larvae and pupae were found in stems and branches that were four to 10cm (1.5 to 4 inches) in diameter.

Adult Asian longhorn beetles are about 20 to 40mm (0.8 to 1.6 inches) long, and shiny black with variable white markings. They have distinctive antennae, or ‘horns’, which are up to twice the body length and coloured black with white or light blue bands.

They are almost identical to their close relative, the citrus longhorn beetle (Anoplophora chinensis), which is another non-native longhorn beetle which could threaten trees in the UK.

Some common native beetles can also be mistaken for Asian longhorn beetles. 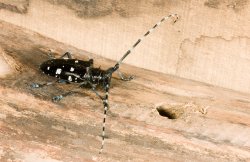 The most obvious symptoms of ALB presence are the roughly circular exit holes (left) made by the emerging adult beetles in the trunks and branches. These holes are about 10mm (0.4 inches) wide and are usually found in the main trunk and above.

Other signs which might be present, but less obvious, include:

The following publications can provide further help with identification.

(Please note: the contact and reporting details on the Pest Alert and poster have been superseded by those on this page.)

If you think you have spotted an Asian longhorn beetle, or signs of its presence in one of the tree species listed above, you must report it immediately.

Note that TreeAlert and TreeCheck require at least one clear, well lit photograph to be uploaded. Photographs of symptoms, such as exit holes in trunks and branches, as well as of beetles, whether alive or dead, are helpful.

Notifying the plant health authorities directly, rather than via TreeAlert, is the preferred means for suspecting findings in trade, such as in nurseries. In such cases,

If possible, catch any beetles you find and place them in secure containers such as sealed glass jars so that an inspector can collect them. The beetles are not harmful to people, but they should be handled with caution because they can nip, although the nip is unlikely to penetrate the skin or draw blood. For most people the nip is likely to be no more uncomfortable than a nip by one of our larger native beetles.

Adult beetles can fly up to 2km (1.2 miles) away from the tree from which they emerge.

Longer-distance spread can result from larvae surviving in, and emerging from, untreated wood packaging material such crates, boxes and pallets. It is thought likely that the 2012 outbreak in Paddock Wood, Kent, resulted from beetles emerging from crates made from untreated wood which had been used to import slate from China to an industrial site in the village. On emergence, the beetles would have flown to suitable trees nearby in which to mate and lay eggs.

All wood packaging material imported into the European Union must be marked to show that it has been treated to reduce the risk of carrying quarantine pests. It is illegal to import wood into the UK which shows signs of ALB presence.

The insect develops through its full life cycle in one, two, three or four years, depending upon its geographic location. Features of the life cyle include the following.

The life cycle from egg through larvae to beetle is one to two years in Asia, and possibly longer in the UK. Beetles emerge from spring onwards to mate and lay eggs, after which they die. The picture below shows a beetle emerging from its exit hole. 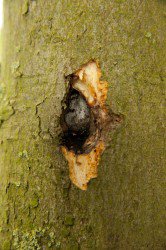 In North America and central and southern parts of Europe, ALB completes its life cycle in one to two years, but in cooler regions the lifecycle can take up to three or four years.

It is likely that in southern Britain most individuals would complete their development in two years. Climatic mapping suggests that conditions along the south coast and South-East England would be suitable for a two-year life cycle. Further north, the beetle is less likely to be able to complete its life cycle in two years. However, there is always an element of uncertainty about these predictions, resulting from very local variations in climate, our changing climate, and uncertainties about the origin of the invasive beetles.

The action which would be taken, and which was taken in 2012, in the event of a discovery of an outbreak of ALB would likely include:

The only insecticides that could be considered are not completely effective, so there is no real substitute for tree removal and destruction as a means of eradicating ALB outbreaks. Chipping wood to lengths of no longer than 25mm (1 inch) is considered effective in killing all larvae present and removing the risk.

Forest Research has compiled detailed information about the outbreak in Kent , including an analysis of the tree species which were affected. As noted above, the most frequently affected species was sycamore (Acer pseudoplatanus), but field maple (Acer campestre), box elder (Acer negundo), sallow and willow (Salix species), European horse chestnut (Aesculus hippocastanum) and poplar (Populus spp.) were also attacked.

We also carried out an investigation of the social dimensions of the outbreak. We looked at ways to improve rapid detection and response through more strategic stakeholder engagement, clearly defining responsibilities for pest surveillance and dealing with outbreaks, and better communication to raise awareness, including that of local residents.

Our scientists and others have written two scientific papers about the Asian longhorn beetle outbreak in England, both of which were published in the Journal of Agricultural & Forest Entomology. They were: