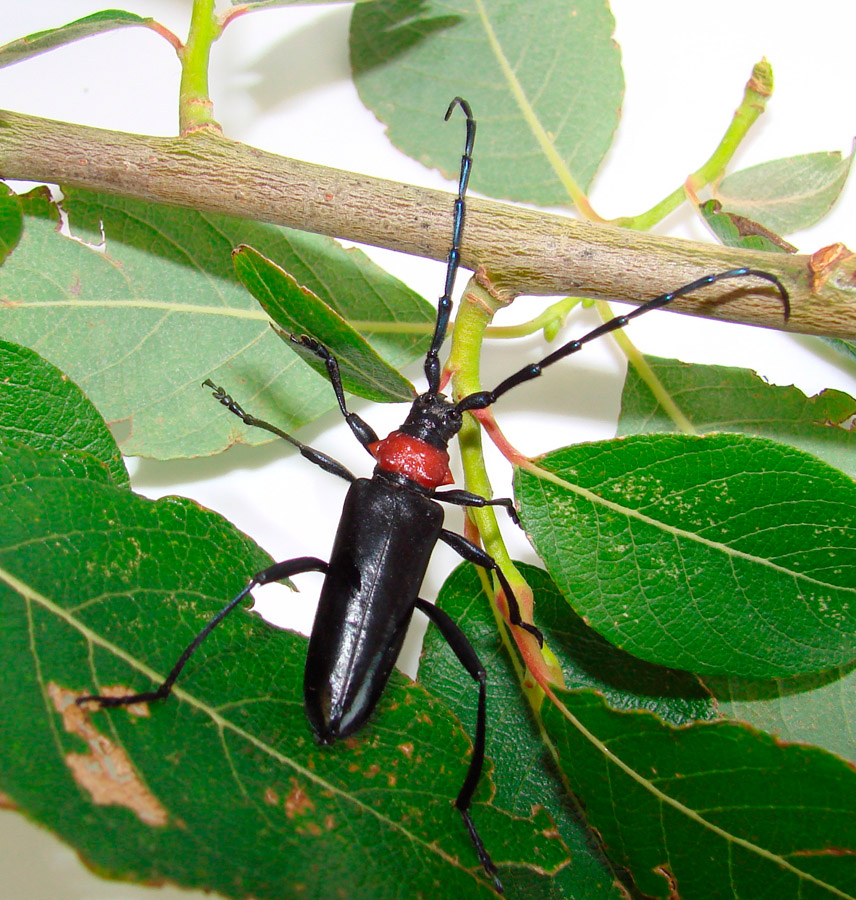 Red-necked longhorn beetle is a highly damaging pest of trees in the Prunus genus, such as apricot, cherry, peach and plum, and some ornamental Prunus species.

It is also known as red-necked longicorn beetle.

Red-necked longhorn beetle is native to much of Asia, being recorded from China, Korea, Taiwan and Vietnam. It has been introduced to Japan, and there have been outbreaks (establishment of breeding populations) in Germany and Italy.

There has been one case of individuals being intercepted in the UK, in 2008 in wooden pallets in a warehouse, but no outbreaks (breeding populations) have been discovered here.

Red-necked longhorn beetles are among the most destructive longhorn beetle pests of fruit trees, especially apricot and peach trees, in lowland areas of China, where economic losses can be substantial. Trees are weakened by the activity of the larval (grub) stage of the species’ life cycle, and become more susceptible to diseases as a consequence. Serious infestation causes tree decay and reductions in fruit yield. In the Italian outbreak several hundred apricot, cherry and plum trees have been severely damaged or killed.

It has also been reported to attack other plants belonging to 11 plant families, but these records require confirmation. Only Prunus species have been observed being attacked in Germany and Italy.

Adult beetles are elongate and shiny blue-black except for the pronotum (section just behind the head), which is usually distinctively bright red and bears a pair of stout, spine-like lateral tubercles, or protuberances. These are 22 to 38mm long, and about four times longer than they are wide.

The antennae are as long as, or slightly longer than, the body, and uniformly black, as are the long thin legs.

Males tend to be smaller than females, with proportionately longer antennae. Some entirely black adults have been found in Italy, and these are more difficult to recognise in the field.

Mature larvae are pale yellowish-white, broadest across the prothorax, and with body segments tapering towards the abdominal apex. Their length varies from 42 to 52mm.

The pupa is light yellow, becoming darker as the adult develops, 22 to 38mm long, with legs and long, coiled antennae. 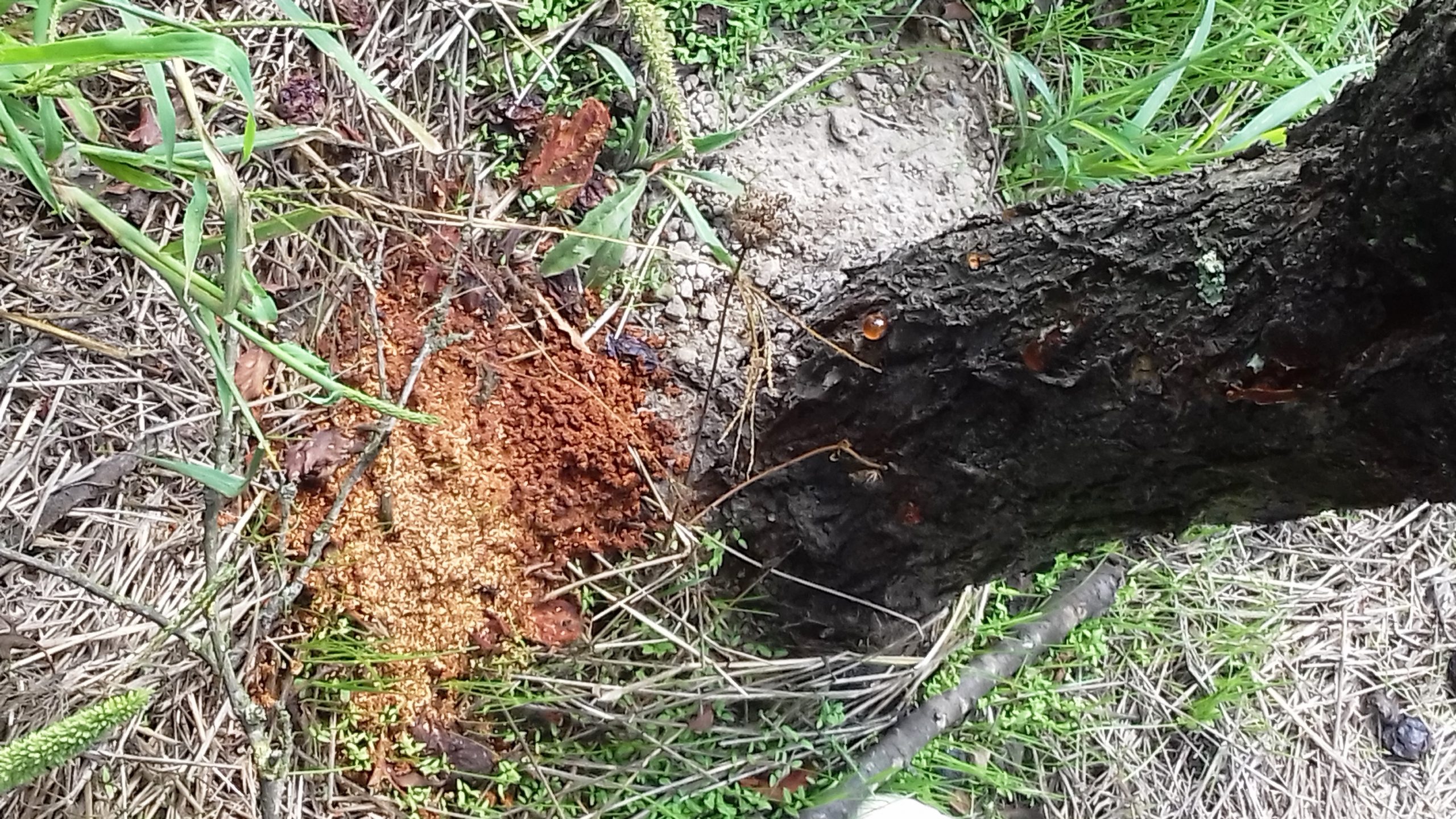 The first symptoms that are likely to be seen are piles of extruded larval frass, pictured above, at the bases of infested trees. Frass is a mixture of the larvae’s faeces and the wood powder the larvae generate as they burrow.

At the same time oval emergence holes in the bark should be visible. These are about 12mm wide, and are where the adult beetles emerge after pupation.

Confirmation that a tree is infested requires destructive sampling. Removing bark might reveal young larvae feeding in the phloem, and cutting through the trunk might reveal mature larvae and galleries in the heart wood.

There is a European species of Aromia, the musk beetle (A. moschata), which occurs in south-east England. Adult musk beetles are easily distinguished from red-necked longhorn beetles by their colour, being generally a uniform metallic green, blue violet, copper or black. The larvae of musk beetles usually develop in Salix species (willow and sallow trees) rather than in Prunus.

Further help with identification is available in this Defra factsheet and from Observatree.

Suspected sightings of red-necked longhorn beetle in the United Kingdom must be reported immediately to the plant health authorities.

Although it is not known to be here, there is a risk of its accidental introduction, especially in the trade in plants and wood and wood products. We therefore urge constant vigilance for it, especially by people invoved in the trade.

Please note that TreeAlert and TreeCheck both require photographs to be uploaded. These should be clear, well-lit, close-up pictures of symptoms and/or the beetle.

Alternatively, reports can be made directly to the country plant health authority. This is the preferred option if the suspected sighting occurs on trade premises, such as:

The plant health authorities are:

If possible, catch any beetles you find and place them in secure containers such as sealed glass jars so that an inspector can collect them. No information is available on whether they can nip, so caution is advised when catching them.

The beetles can fly, but there is no data on how far. However, flight is unlikely to exceed several hundred metres per year.

Long-distance and international dispersal is most likely to occur with trade, for example, as eggs, larvae or pupae hidden in woody planting material or wood packaging.

Traps baited with different mixtures have been proposed for detecting adults in the field during the summer months.

Red-necked longhorn beetles are difficult to control because the larvae and pupae develop inside the host tree, so these life stages are protected from applications of insecticides, and from most predators, by the surrounding plant tissue.

The nematode Steinerrnema carpocapsae, a kind of threadworm, is used as a biological control agent.

Insecticides used against other orchard pests can have some control of any adults (beetles) present at the time of application. Product labels and off-label conditions should be followed when applying any pesticide.

However, the only fully effective way of controlling larvae is to destroy the infested plant before the larvae can pupate into adults (beetles), thereby preventing them from mating and producing a new generation.

The UK Government website has details of the plant health regulations which apply to the importation of plants and other planting material and wood and wood products.

Red-necked longhorn beetle over-winters as larvae of different ages, and the adults (beetles) emerge from June to August.

Female beetles mate several times during their lives, and lay eggs in crevices in the bark. Each female lays an average 350 eggs during its lifetime, with as many as 734 being recorded.

Larvae hatch from the eggs in about 10 days, and then penetrate under the bark, boring a gallery in the phloem, the layer of tissue which transports nutrients from the leaves to growing parts of the plant.

Larvae may overwinter two or three times and mature in 21 to 33 months. They may spend several months without feeding before pupation.

Mature larvae pupate in a pupal chamber excavated in the trunk and main branches. The pupal period lasts between 17 and 23 days, and pupation generally occurs in spring. The life cycle from egg hatching to adult emergence ranges from two to four years.