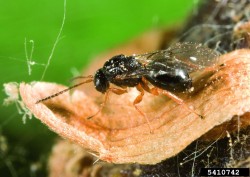 The species is established in several European countries from Germany and the Czech Republic in the north to the Mediterranean region in the south.

It was discovered for the first time in the United Kingdom in Farningham Wood in Kent, England, in June 2015, and shortly afterwards in a group of street trees in St Albans, Hertfordshire. It has since been found at a number of other sites, most of them in and around London and South-East England.

Our map shows where its presence has been confirmed.

OCGW is a pest of sweet chestnut trees because activity by its larvae (the ‘grubs’, or immature life stage) causes abnormal growths, called galls, to form on the buds, leaves and petioles (leaf stalks). In high numbers the galls can weaken sweet chestnut trees and make them more vulnerable to other pests and diseases, especially sweet chestnut blight, which is caused by the fungus Cryphonectria parasitica. Severe attacks can result in tree decline.

The wasp is also parthenogenetic, meaning it does not need male wasps to reproduce. Adult females emerge from pupation already gravid (bearing eggs ready to lay).

Sweet chestnut is valued as a timber species and its production is locally important in Britain, particularly in Kent, South-East England, where the small chestnut coppicing industry has been enjoying a revival. New markets for high-quality chestnut products have been developed, so any threat to sweet chestnut could have economic implications for these producers.

Sweet chestnut trees are also the source of the edible chestnut, popular in the UK as part of Christmas celebrations. Although there are some nut orchards here, the UK is not a large producer of sweet chestnuts. Most of those consumed in the UK are imported, so supplies are unlikely to be affected by the current England outbreaks.

The wasp does not bite, sting or pose any other threat to people, pets or livestock.

It does not attack horse chestnut, or ‘conker’ trees, which belong to the Aesculus genus, or any other species of tree widely grown in Britain.

No other organism is known to form galls on sweet chestnut trees, so the presence of galls on them is an obvious and reliable symptom of OCGW infestation. 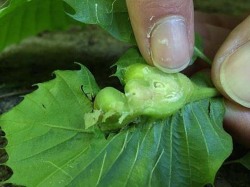 As shown above and below, fresh galls can be coloured green, rose pink or red. 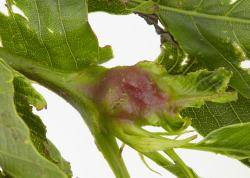 They then gradually dry out and turn brown and woody over the summer (below), when the adult wasps emerge from them. 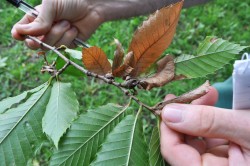 They can cause the leaves to drop early. Most galls fall off the tree when the leaves fall in autumn, although galls attached to the bases of petioles (leaf stalks) can stay on the tree for two or more years.

Galls can grow up to 4cm (1.75in) in diameter, although most of those seen in England have been between 1cm and 2cm.

They can occur at any height on the tree, and on any age of tree with buds.

The adult wasp is tiny, being only 2.5-3mm long, so it is unlikely to be seen by most visitors to affected sites. It has a black body, translucent wings and orange legs, and emerges from the galls in June and July.

The following documents have further guidance to the symptoms.

If you think you have seen evidence, such as galls, of OCGW presence on sweet chestnut trees, you must report it immediately.

Note that TreeAlert and TreeCheck require at least one clear, well lit photograph to be uploaded.

Before reporting a sighting, please:

Reproduction is achieved from unfertilised eggs without mating in a process known as thelytokous parthenogenesis: male wasps have never been recorded.

The female wasp lays eggs in the trees’ growth buds in summer, and the larvae emerge from the eggs within 30 to 40 days. The early stages of the larvae then lie dormant in the bud over the winter.

Larval activity and development in the buds resume the following spring, causing the formation of galls in early summer. The galls are formed on young twigs, on leaf petioles (stalks), or on the midrib of leaves. These green, red or rose-coloured galls start at between 5 and 20mm in diameter, and can develop up to 4cm in diameter as the leaf tries to form.

Adult wasps emerge from the galls to fly and lay their eggs during June and July, leaving exit holes in the galls. The ‘used’ galls then turn brown and woody over time, and if they do not fall off the tree with the leaves in autumn, they can remain on the tree for two years or more.

The insects can naturally expand their range by distances of tens or hundreds of metres by flying, especially if they are assisted by the wind. Longer-distance spread is possible if they are moved in vehicles.

Long-distance spread can also occur through movements of infested sweet chestnut plant material, such as:

Good biosecurity (plant hygiene) is the best available means of minimising spread and impact. It is very important that visitors to, and workers at, affected sites do not remove ANY plant material, including branches, leaves, twigs, sticks or bark, because this could accidentally spread the insect.

Children must not take galls away to keep or play with. Forestry workers, tree surgeons, ground-care professionals and others working at affected sites must brush all soil and plant material off their footwear, clothing, tools, machinery and vehicles before leaving affected sites.

Chestnut logs should be free of foliage, including epicormic growths (side-shoots), before being moved off site.

More-detailed guidance on biosecurity is available on the UK Government website.

Following extensive research undertaken by Fera Science Ltd. and funded by Defra, a biological control agent – a parasitoid wasp called Torymus sinensis – was released at a number of sites in April 2021. The parasitoid wasp was already present in England but in very low numbers. By carrying out further releases of the wasp, it will enable the population to build up to a level whereby it can provide an effective control for Oriental Chestnut Gall Wasp in England. The method is already being used successfully in many countries across Europe. The release of any biological control is carefully regulated, and a thorough risk assessment and evaluation of potential environmental effects of releasing Torymus sinensis in England has been done by scientists. 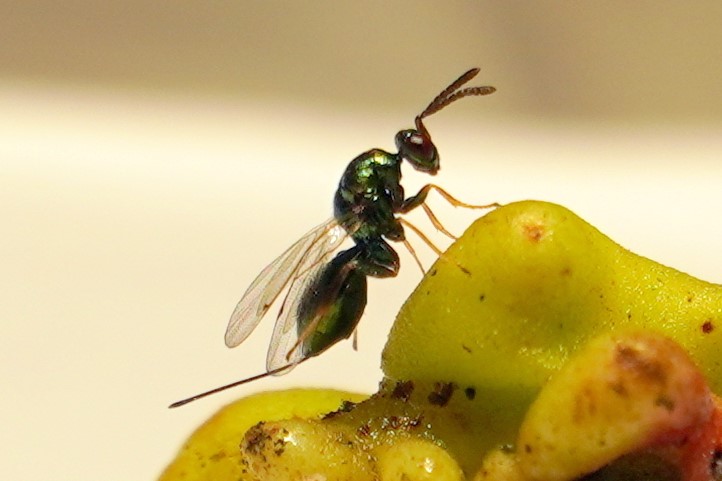 Following discovery of the 2015 outbreaks in Kent and Hertfordshire, we assisted the Forestry Commission with an urgent survey of sweet chestnut trees in the surrounding areas and further afield for any evidence of the pest elsewhere, and to assess what eradication or control action was practicable.

The Forestry Commission served containment notices on the owners to prevent sweet chestnut material being removed from the sites.

Sweet chestnut trees in the most heavily affected part of Farningham Woods were felled to minimise the risk of the pest spreading to other areas. All the affected trees in St Albans were felled and destroyed.

Healthy, useable timber from Farningham Woods was recovered for the market. Some of the affected trees were already due to be felled in 2015’s chestnut coppice harvest.

Later in 2015 we examined bud samples from sweet chestnut trees at Farningham for evidence of egg-laying by the wasp, but found none.

Surveys for OCGW continue to monitor its distribution, and the Forestry Commission works with owners to minimise its impacts.

In 2021, following extensive research, a biological control agent – a parasitoid wasp called Torymus sinensis – was released at a number of sites in southern England to help control Oriental Chestnut Gall Wasp in England.

Read our scientists’ detailed account of the 2015 outbreaks, and how citizen science played a role.

Our scientists have also been investigating whether cracks in the galls made by OCGW provide entrance points for the Cryphonectria parasitica fungus which causes sweet chestnut blight. Their preliminary findings were published in 2020.

OCGW is a native of parts of Asia. It has been accidentally introduced in international trade to Europe and North America. In Europe it has been recorded in Croatia, the Czech Republic, France, Germany, Hungary, Italy, Portugal, Slovenia, Spain and Switzerland.

We do not know exactly how it entered Great Britain, nor whether it entered in a single introduction event, or two or more.