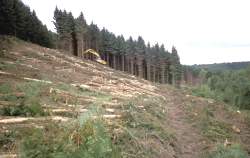 Where woodland cover is to be retained on or near an archaeological site, some form of management requirement is inevitable.

The following Forestry Commission publications provide examples of how mechanised operations can be conducted with reduced ground disturbance:

Whether any vehicular movement can be tolerated on a known or potential archaeology site, will inevitably depend upon the type of evidence, the soil type and its condition.

Most forest operations carry a risk of damage to archaeological sites. While brash application can help to reduce soil damage, there have been incidences where the protective cover has hidden small upstanding features that were subsequently damaged by vehicle passage. Nevertheless, with increased awareness of the archaeological resource and further guidance on practice to reduce impacts on sites as a whole, the continued management of both the evidence and forest should be possible.

Some examples of mechanised operations are outlined below.

Thinning allows more light into the forest and reduces competition for the remaining individuals, thus enhancing development. There are two main types of thinning:

Equipment used in any mechanised thinning will be partly dependant upon stocking density, age of the crop, access, etc. The stem is usually cut close to ground level and the remaining stump left in situ.

The method of tree removal preferred on many archaeological sites is manual felling by chain saw to reduce the likelihood of vehicular ground disturbance. Where tree removal is favoured on larger sites such as field systems or cairn fields, manual felling is not so practical and forest machinery may have to be considered. A modern mechanised harvester is a very precise tool and can be effective in careful tree removal on appropriate sensitive sites. Where heavy machinery is used, the soil beneath is at risk from physical damage such as compaction and erosion unless suitably protected. However, this erosion is preventable with appropriate soil protection and the use of brash mats has become commonplace and is now the standard procedure on most harvested sites.

Timber processing may be carried out before or after extraction depending upon site access and conditions. However, it should not occur on archaeological sites (in accordance with current FC guidelines), and timber should be processed elsewhere.

Traditional extraction by horse is used in some areas and on inaccessible or sensitive sites. Line grapple or skidders can also be used to drag stems off site. Where conditions permit, stems can be loaded onto a forwarder and driven out of the forest. However, the number of passes required over the same area of soil to remove the timber is also relevant. On inaccessible sites or steeper slopes cable cranes allow timber extraction wholly or partially clear of the ground. As with felling, the method used will be determined by the nature of the archaeological evidence, the crop type and site conditions. Whatever extraction method is used, one important consideration will be the route taken and consultation with the local authority archaeologist is essential to agree a path that minimises any risk of archaeological damage.

WTH is practised at a few locations in the UK, but it may become more common as the demand for biofuels increases. Brash is removed and sold as a biofuel or chipped and stored to form compost. In Thetford Forest, the harvesting of pine has also resulted in the removal of roots (destumping) due a root and butt rotting disease commonly known as Fomes (Heterobasidion annosum).

The Breckland landscape (in which Thetford forest occurs) also has high densities of worked flint. Any ground disturbance will alter the flint distribution patterns and hinder their interpretation. However, archaeological walk-over surveys are carried out by local authority archaeologists on behalf of the Forest District to note any important features prior to any destumping.