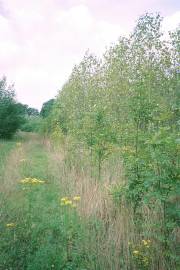 Short rotation coppice (SRC) is harvested on a cycle of onlytwo to fouryears. The crop is typically fast growing poplars and willows with stems being sold as pulpwood or for fuel as a source of renewable energy. With the UK government committed to renewable energy providing 10% of electricity supplies by the year 2010, the interest in SRC crops continues. Wood burning power stations are already in place and grants available to encourage farmers to convert some arable land to SRC production.

Concerns have been raised over the different rooting habits of SRC to arable crops and their impacts on any subsurface archaeology. In direct response to the rooting issue, Forest Research conducted a survey of SRC rooting habits on four major soil types. Such fast vigorous growth is also believed to have a higher water consumption than that of standard plantations which has implications for planting where waterlogged archaeological deposits may exist.

Roots were exposed in trenches dug within a variety of willow and poplar clonal stands grown on Brown Earth, Pelosol, Ground-Water Gley and Surface-Water Gley soils. Root depths and diameters were recorded in each of the 33 trenches. In total, over 18 000 roots were measured on 264 coppice stools. 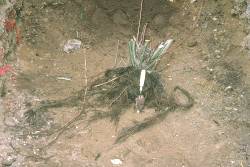 The rooting habits of willow and poplar are influenced by many variables such as soil properties (physical, chemical, hydrological), silviculture (cultivation, establishment, coppice rotation) and species. This particular study found that the rotation length, species and stool location within a blockall influenced the maximum size of root produced (diameter). Soil type had some influence on the root number and depth, but the pattern of root distribution down the soil profile was similar for both species. All of the stools assessed showed preferential rooting in the plough soil and a relationship was found between the maximum root diameters and the frequency with which the stem is cut. While root diameters ranged from 45 mm to 0.1 mm, the vast majority was less than 2 mm. Roots were found to 1.2 m but were very few in number.

The preferential rooting in the former plough soil and the reduced root diameter due to regular coppicing suggests that rooting impacts at greater depths may be similar to many other arable crops. The greater issues may be those of site cultivation or hydrology. The possible impacts on any buried archaeological evidence will inevitably be site-specific.

Further information on this rooting study(PDF-1180K) is available from the historic environment section of the 2002-2003 Forest Research Annual Report. A detailed account can be found in:

Crow, P. and Houston, T.J. (2004). The influence of soil and coppice cycle on the rooting habit of short rotation poplar and willow coppice. Biomass and Bioenergy, 26 497-505.

Miscanthus is a woody perennial grass with very high rates of growth. It can be planted one spring and canes produced during the summer are harvested in winter. The crop produces new growth the following spring. Cultivation is usually minimal, and for most sites standard ploughing is sufficient. Where former plough soils are very shallow or compacted, some sub-soiling may be recommended but this requirement will be site specific.

Like SRC, the rhizome produced by miscanthus predominantly occurs within the former plough soil but more vigorous lateral growth results in greater bioturbation of the soil and the formation of an extensive interlocking rhizome mat. Some parts of the rhizome will descend deeper (up to 1 or 2 m), but like SRC roots, they are few in number.

Harvesting is mechanised and the extensive rhizome mat can help to maintain soil integrity, protecting it from trafficking.

As with SRC, perhaps of greater relevance to archaeological preservation are issues of site hydrology and crop removal at the end of productive life. Both crops are reputed to have a high water uptake compared to many other land uses and may not be suitable on sites where waterlogged remains are thought to occur. Both SRC and miscanthus are likely to require ploughing and an application of herbicide to remove them at the end of their productive lives.