Bleeding canker is a disease of horse chestnut trees (Aesculus hippocastanum). It affects trees of all ages and produces external and internal symptoms. Ultimately the disease can lead to tree death, but trees can also have periods of remission and even recover.

This resource takes you through each symptom of bleeding canker disease with detailed descriptions and images. You can find more photos of infected trees in our photo gallery.

One of the first external symptoms of infection is bleeding lesions: patches of dying bark on the stem or branches that ooze drops of rusty-red, yellow-brown or almost black, gummy liquid. (Photos1 and 2). 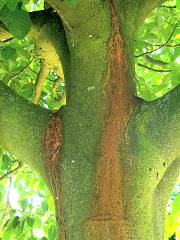 The bleeding may be at the base of the tree at the soil surface level, or may be higher up the trunk. In spring, bleeding patches exude a dark but transparent liquid that turns a cloudy or opaque rusty-colour during summer and dribbles down the tree trunk. Under dry summer conditions, bleeding may cease and the exudate dries to leave a dark, brittle crust near the point of exit in the bark (Photo 3).

Renewed bleeding may be seen later in the year, often in autumn. This suggests that pathogen activity is greatest under the moist and mild conditions of spring and autumn.

After some months the centre of the bleeding bark patch may crack apart. Fruit bodies of wood-rotting fungi often appear on the surface of the dead bark, or protrude out of the bark cracks (Photo 4).

Over several years – and particularly if a tree has multiple bleeding cankers – the areas of dead phloem and cambium underneath the bleeding patches may coalesce and extend until they start to encircle the entire trunk or branch.

When this happens crown symptoms become visible, typically consisting of yellowing of foliage, premature leaf drop and eventually crown death (photos5 and 6). Sometimes part of the crown may fail to flush and the remaining foliage withers and dies later in the same year. In trees with chronic dieback caused by the disease, the leaves may also be smaller, and seem thinner and more flaccid than the foliage of healthy trees.(Photos5 and 6). 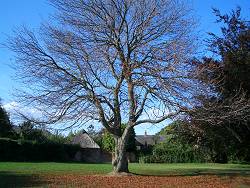 Photo6Compare the crown of healthy and diseased trees.

The inner bark (phloem) under the bleeding patches is usually necrotic or dead, with an orange-brown colour which is often clearly mottled or zoned (Photos7 and 8).

Underneath the wood may be stained blue-black (Photo 9). 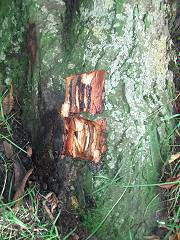 Sometimes white fungal mycelium (Photo 10) can be seen under the dying bark but this is usually indicative of Armillaria (honey fungus) or other decay fungi that invade the moribund tissue and not the original cause of bark death. When this happens the agent that originally caused the bleeding canker cannot be isolated.

Sometimes Armillaria does attack healthy trees and causes stem bleeding, as it invades via the tree root system. However, in such cases the stem bleeding is likely to be confined to the root collar and lower stem.

Take a look at more photos of infected horse chestnuts in our photo gallery.