Reportable – See 'report a sighting' below 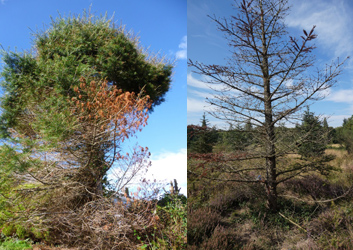 Neonectria canker of fir is a damaging disease of fir trees (trees in the Abies genus), caused by a fungus called Neonectria neomacrospora. It causes severe cankers, or lesions in the bark, leading to crown dieback, and can lead eventually to the death of the tree.

N. neomacrospora is reported to occur in North America, and there are old records of its presence in Europe (outside Denmark and Norway), although not causing severe symptoms.

The disease has been reported from at least 13 species of fir in Europe, and these are listed in Table 1. In particular, heavy attacks have been recorded on Nordmann fir (Abies nordmanniana) in Denmark, and on sub-alpine fir (A. lasiocarpa) in Norway.

It has been confirmed on a largely similar range of fir species in England and Wales since 2015, with affected species also detailed in Table 1.

Outside the genus Abies, it has been observed infrequently on Norway spruce (Picea abies) in the vicinity of dying white fir, and on western hemlock (Tsuga heterophylla).

Table 1. Abies species associated with Neonectria neomacrospora in mainland Europe and the UK

Tree deaths have often occurred on fir species in landscape plantings, Christmas tree plantations, and forest stands. In Denmark, Neonectria has also been found on trees and seeds in a Nordmann fir (A. nordmanniana) seed orchard, consistent with other findings of seed transmission of the disease. It could therefore pose an economically significant risk to businesses, and to forest biodiversity.

If it were to kill large numbers of fir trees in forests it would pose a heightened fire risk in periods of hot, dry weather as the dead  plant material dries out and becomes easy to ignite. 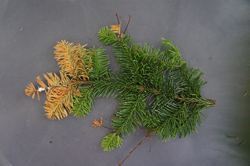 Dead tips seen in early stages of infection (above). 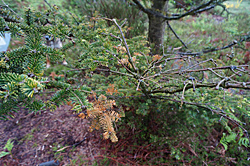 Dead shoots, seen in the lower branches (above) and all over the tree (top picture). 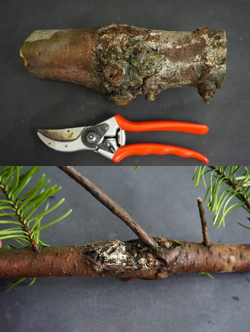 Affected branches or trunks develop cankers (above), from which resin can flow abundantly. When the canker girdles the branches or the trunk, the part of the tree above the canker dies back. 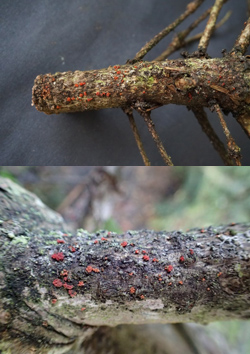 In late autumn and winter, and under humid conditions, characteristic small, rounded, red fruiting bodies (above), can develop on the affected parts of the tree. They can also develop on plant material that has been dead for some time (usually more than 1 year). These fruiting bodies are called perithecia, and they contain the spores of the fungus. 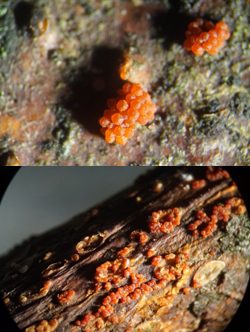 Seen close up (above), the red fruiting bodies resemble insect eggs, because they are usually found in clusters. 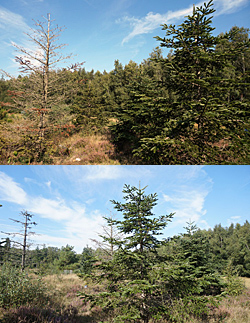 Badly affected trees with extensive dieback will die (above).

We do not not require reports of susected cases from the public, but forest, nursery and Christmas tree plantation managers should report suspected cases in:

The biology and epidemiology of this fungus are largely unknown. It is presumed that the disease is spread aerially, and that the conidia (asexual spores) are dispersed locally by rain splash. It is also possible that strong winds disperse them over longer distances. Transmission via contaminated or infected seed has also been reported, although the frequency with which this occurs is unknown.

Insects such as the small fir bark beetle (Cryphalus piceae) might also play a role as vectors (agents of spread), especially because this particular species of bark beetle became prominent in Denmark about the time that the disease started to emerge.

However, although Neonectria disease and C. piceae are often found together on affected trees, there is no confirmed link, so it might be that the beetle is simply able to take advantage of disease-stressed trees.

The needle and shoot sucking aphid (Adelges sub gen. dreyfusi) does appear to have a role in increased levels of fungal attack, based on a statistical correlation between the amount of damage and the occurrence of this adelgid. In Britain, cultures of N. neomacrospora have been isolated from the distorted twig growth caused by adelgid feeding, but the disease can also occur in the absence of adelgid damage.

Spread has probably also occurred through the movement of infected fir plants into previously unaffected areas.

No effective control measures against N. neomacrospora in forest stands have been reported. Information about possible control methods in nurseries or in parks and gardens is scarce, with methods mostly limited to sanitation and improved plant hygiene.

Where practical, affected branches or shoot tips should be removed, cutting back to the healthy wood. Stringent biosecurity measures should also be taken to clean and disinfect tools and equipment to reduce the possibility of spread from tree to tree as well as between sites.

More-detailed guidance on biosecurity measures is available on the UK Government website.

Consideration should be given to the risk posed by introducing new plants to sites where the disease is not present. This canker disease is particularly severe in Christmas tree plantations in some countries, so we recommend Christmas tree growers use fungicide treatments and rapid destruction of diseased trees.

Neonectria neomacrospora is not currently listed as a quarantine organism in the European Union’s Plant Health Directive.

It is, however, recognised as a potential risk by the Defra Plant Health Risk Group, and has been added to the UK Plant Health Risk Register. However, the lack of information and taxonomic confusion about whether this was a new species delayed the drafting of a pest risk analysis.

Neonectria neomacrospora was first described, from grafted white fir (Abies concolor), in a German nursery early in the 20th century, and has been known in Europe for decades. However, it was only in 2008 that high levels of damage were observed in Norway and Denmark, and reported internationally in 2011.

There were sporadic reports of the disease in Great Britain in the 1960s and 1990s. We then observed a re-emergence of the disease on different Abies species in 2015, when several cases were reported to our Tree Health Diagnostic & Advisory Service (THDAS).

Peace, TR. (1962). Pathology of trees and Shrubs with Special Reference to Great Britain. Oxford at the Clarendon Press, Oxford.

The following documents are in German or Danish. 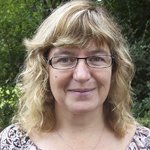 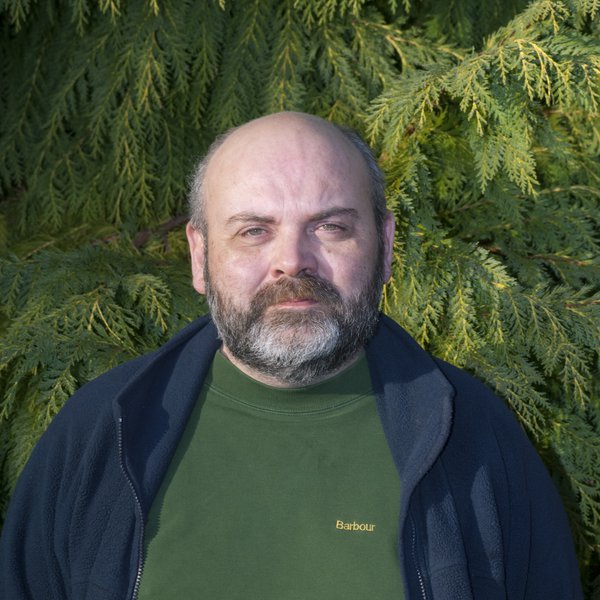