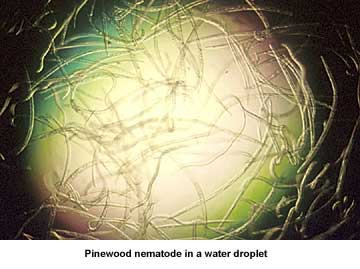 Pine wood nematode (PWN), also known as pine wilt nematode, is a microscopic, worm-like creature which is a serious threat to European conifer forests, including the United Kingdom’s.

The picture above shows pine wood nematodes in a water droplet.

Infestation of pine trees by pine wood nematodes causes a condition called pine wilt disease, and is often fatal to the tree.  There have been extensive tree deaths in all countries where pine wilt has been recorded.

Pine wilt and subsequent tree death is caused by the nematodes’ feeding on the epithelial cells lining the resin ducts of susceptible trees, which disrupts water conduction in the tree.

The pest is causing significant damage in Portugal, despite stringent measures to bring it under control. This increases the risk of its being accidentally introduced to the UK, especially through the international trade in plants, wood and wood products.

If it were to become established in the UK it could cause economic damage to our softwood-based forest and timber industries. It could also disrupt forest biodiversity and ecosystems, especially those of our native Scots pine forests.

Pine wood nematode can attack trees of most coniferous genera, but especially pines (species in the Pinus genus), including the UK’s native Scots pine (Pinus sylvestris). However, healthy trees of some pine species are usually little affected by their presence. In the case of North American native pine species, this is probably a result of their long-co-evolution with PWN.

The only conifer species thought to be unsuitable for pine wood nematode are species in the genera Thuja (some types of cypress) and Taxus (yews).

Pine wood nematodes are invisible to the naked eye, but they are spread by sawyer beetles (species in the Monochamus genus), which do not occur naturally in the UK. So the most important thing to look out for here are sawyer beetles in association with coniferous wood or trees, because they are likely to be carrying nematodes.

Adults of Japanese pine sawyers (M. alternatus), pictured above, feed on the bark of twigs of healthy host trees, so look for signs of this, and for their eggs on dying or recently felled trees. Pictured below is a European species of pine sawyer, M. sartor. 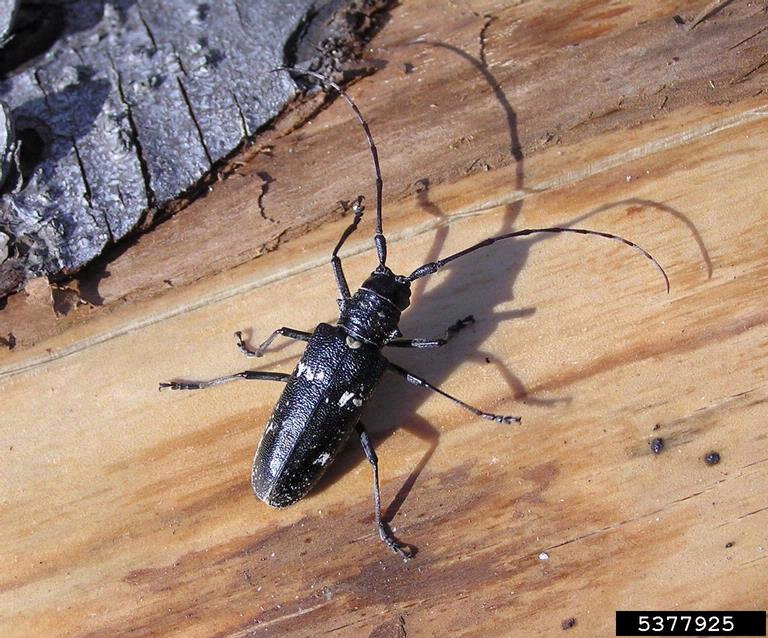 Peeling off some bark can reveal larvae feeding on the inner bark, and excreting fine brown frass (a mixture of the larvae’s faeces and white wood shreds) from oviposition (egg-laying) scars. As the larvae grow, they press the frass in and along the gallery under the bark.

Looking under the bark might also reveal U-shaped pupal chambers formed by the larvae in the xylem.

Look also for signs of frass in slits which they make in the bark. 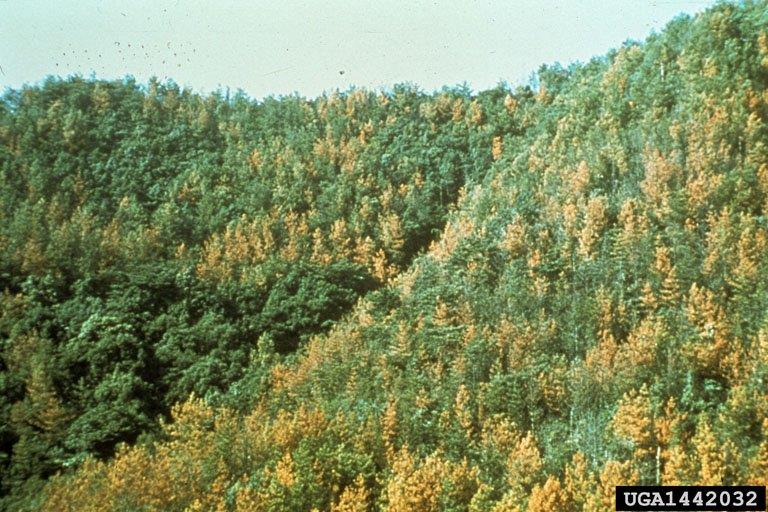 Signs of pine wilt disease include browning or yellowing of the needles (above). Symptoms can become visible within a few weeks of the tree’s being infested by pine wood nematodes, and in severe cases the tree can die within three months of symptoms first becoming visible.

Although pine wood nematode is not known to be present in the UK, there is a risk of its being accidentally introduced, especially through the international trade in plants, wood and wood products. Raw wood, that is, untreated wood and /or wood with bark still attached, poses a particularly high risk.

We therefore urge everyone, and especially tree and plant professionals and importers of wood and plant materials, to remain vigilant for signs of it and pine sawyer beetles, and to report suspected sightings to the forestry authorities immediately.

Note that TreeAlert and TreeCheck both require clear, well lit digital photographs of the beetles or symptoms of their or the nematodes’ presence.

Suspected sightings on plants and other planting material in trade situations, such as nurseries and garden centres, can also be reported:

Pine wood nematodes are naturally spread by pine sawyer beetles. The beetles lay their eggs in the bark of dead or stressed conifer trees. The larvae which emerge from the eggs feed on the dead wood and then pupate in the resulting cavity. Pine wood nematodes of the third juvenile stage also congregate in the cavities, around the pine sawyer pupae. There, they moult into the fourth juvenile stage, and invade the trachea of the adult beetles emerging from pupation. The adult beetles then disperse to feed on healthy pine trees, spreading the nematodes to the healthy trees in the process.

Longer-distance spread can occur through the movements of plants or wood infested with pine sawyer beetles and nematodes. Pine sawyer beetles have been intercepted in imported timber in several countries, especially wooden packaging, and therefore could be accidentally introduced into the UK in imported wood products.

Pine wood nematode is subject to European Union (EU) emergency measures, and the UK has import controls on wood of pine from demarcated zones in Portugal. All conifer wood originating in PWN-affected countries must be treated to ensure freedom from PWN. Full details of the plant health regulations applying to imports of wood and wood products are available on the UK Government website.

As part of the EU requirements, the UK plant health authorities undertake annual monitoring for PWN, which focuses on woodlands and isolated trees. Sites where pine trees occur close to premises known to receive imported coniferous timber or wooden packing material are prioritised for sampling.

The Forestry Commission’s contingency plan provides for government agencies to make a rapid response to any outbreak of the pest in Great Britain. It sets out the measures which would be taken by the plant health authorities if an outbreak were discovered here.

In countries where pine wood nematode is established, its spread and impacts are mitigated by measures such as felling and destroying affected trees. Tree destruction can be by burning or chipping or, in some cases, felled trees are sprayed with insecticide. Felled trees can also be stripped of bark to prevent oviposition by pine sawyer beetles. Nematocides are sometimes used in Japan.

The potential for control by bio-pesticides, and biological control agents, is being investigated in some countries.

The first recorded evidence of its having spread out of its native range and affecting previously healthy trees arose when pine trees were noticed dying in Japan very early in the 20th century. However, PWN was only identified as the cause in the late 1960s. Its subsequent spread to other countries probably occurred through international movements of pine wood materials and plants.

Forest Research is a partner in REPHRAME, a collaborative project to develop a simple, web-based interface PWN toolkit to provide data as well as practical advice and new or enhanced methodologies for use by end-user stakeholders.