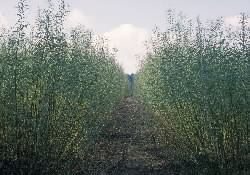 What is short rotation coppice?

Some fast growing tree species can be cut down to a low stump (or stool) when they are dormantin winter andgo on to produce many new stems in the following growing season. This practice is well established in the UK and Europe, having been a traditional method of woodland management over several hundred years for a variety of purposes including charcoal, fencing and shipbuilding.

A number of different species are suitable for coppicing, with different optimum cycle periods.

In the UK many different species have been coppiced in the past, however the principal species currently used for SRC for biomass for energy are:

Willow (Salix spp.) is planted as rods or cuttings in spring using specialist equipment at a density of 15,000 per hectare. The willow stools readily develop multiple shoots when coppiced and several varieties have been specifically bred with characteristics well suited for use as energy crops. Information and advice is available from the Forest Research Yield models for energy coppice of poplar and willow website.

During the first year it can grow up to 4m in height, and is then cut back to ground level in its first winter to encourage it to grow multiple stems.

The first harvest is in winter, typically three years after cut back, again using specialist equipment, however a cycle of 2 or 4 to 5 years is also common.

In fertile sites growth can be very strong during the first two years after coppicing, giving rapid site capture, reducing thereafter and so a 2 year cutting cycle may be more appropriate.

Yield is dependent on many factors, including:

Typically the first harvest may be expected to be somewhat lower than subsequent ones, and figures from 7 to 12 oven dried tonnes per hectare per annum can be expected on reasonably good sites.

Harvesting may be as rods (up to 8 m length), billets (5-15 cm lengths) or as direct chip harvesting. Direct chip harvesting can cause problems for storage with rapid composting (and hence loss of energy content) and mould formation (and attendant health risks) owing to the high moisture content of freshly harvested willow. This can be less of a problem with billets owing to improved air flow through the pile.

A willow SRC plantation may be expected to be viable for up to 30 years before it becomes necessary to replant and can reach 7-8 m in height at harvest. The site should be reasonably flat, or with a slope no more than 7% and, to be eligible for the Defra Energy Crops Scheme (ECS) grant, needs to be at least 3 ha, though this need not all be in a single plot.

Poplar is planted in spring, from cuttings. These cuttings must have anapical bud within 1 cm of the top of the cutting. Because of thisit is difficult to use poplar in equipment developed for plantingwillow short rotaion coppice.

Planting density is lower than for willow, typically 10-12,000 per ha. Cut back takes place late in the following winter.

Yield is very site dependent, and in some sites can out perform willow. Average yield on a suitable site is likely to be in the region of8 oven dry tonnes per hectare per year.

Poplar responds well to harvesting cycles of around four or five years which is slightly longer than the 3 years often recomendedfor willow. This is because growth in the first year following cutback or harvest is generally not as rapid as in subsequent years. Combined with a very up right growth habit this means that the crop may not develop a closed canopy, and hence maximum light interception, until the second or third year.

Harvesting requires similar equipment to willow, however, owing to the tendency of poplar to form fewer, heavier stems, it must be slightly more robust.

Removal of a poplar crop at the end of the useful life of the plantation can bemore difficult than for willow as poplar often forms a large taproot which will generally require a large excavator to remove or more time to decay naturally.

Many traditional broadleaf species can be grown as coppice, such as ash, hazel, sweet chestnut, sycamoreetc. The rotation is typically longer than for willow or poplar, and the yield is lower, but for management within a mixed woodland this can both help to produce products on a more regular basis than from conventional forestry, and also may be useful to produce smaller diameter logs and stems for both firewood and traditional coppice markets.