Acute oak decline is a disease of oak trees which has been emerging in England and Wales since the end of the 20th century. It is characterised by extensive bleeding or oozing of dark fluid from small lesions or splits in the bark of tree stems , eventually leading to dieback and death in most cases. It affects many species of oak (trees in the Quercus genus). 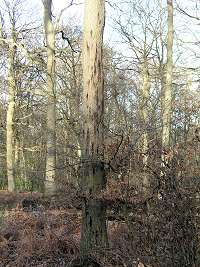 The splits are longitudinal, forming in the cracks between the bark plates, and are typically between 5 and 10cm long. They can be close to one another (10-20cm), or further apart. 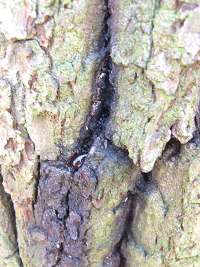 The bleeding patches usually become visible between one and two metres above the ground, and can extend high into the canopy. Beginning in spring, the fluid runs down the stem, staining the bark. 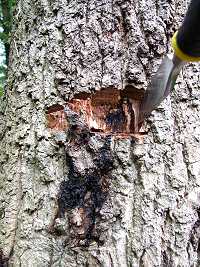 The bleeding often stops at certain times of the year, leaving dry, black streaks on the stems. The dried fluid can cake, or form a crust around the split.

A wet and slimy lesion forms underneath the outer bark at the bleeding point, and the tissue breaks down, developing into a fluid-filled cavity. The larval galleries of the two-spotted oak buprestid (Agrilus biguttatus), a native bark-boring beetle, are frequently visible in and around the lesions.

A cross-section taken through a bleeding point reveals a cavity between the outer bark and the heartwood, and necrotic tissue breaching the cambium and progressing into the sapwood. 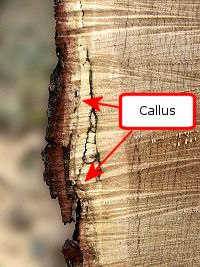 In longitudinal section, black flecking might be seen in the inner bark running up the length of the cut section. In some cases the inner bark can show signs of callusing in an attempt to heal the cavity.

The tree canopy might show signs of deterioration, but in many cases this does not occur until the tree is near death. 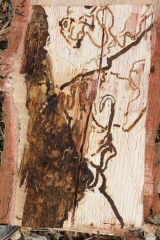 The buprestid larva can sometimes be seen when a panel is opened in the tree stem. 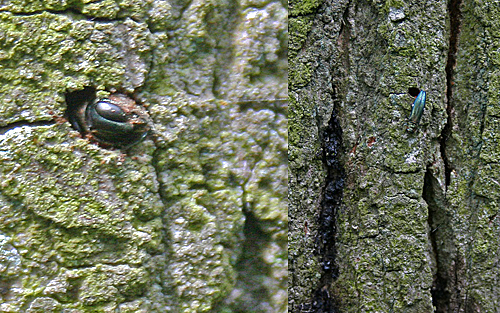 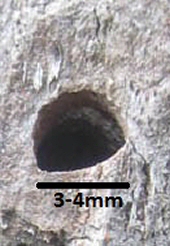 In some cases there is evidence of insect attack associated with the stem bleeding, particularly by the two-spotted oak buprestid beetle. Its D-shaped exit holes (below) might occur in close proximity to some stem bleeds. In the picture at left, a beetle can be seen emerging though one of the holes.

Two-spotted oak buprestid beetles are not considered to be a cause of acute oak decline, but they are thought to be 'opportunistic' on the weakened trees. That is, they take advantage of the tree's weakened state and infest it, which further weakens the tree, and might even hasten its death.

The establishment of AOD on a site is typically characterised by low numbers of trees being affected initially, increasing to the point where more than half the oaks on the site have extensive stem bleeding.