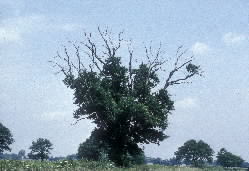 Recent publicity in some leading UK news media has focused attention on a problem with the health of oak trees in Great Britain known as "oak decline" or "oak dieback". Some of the media coverage has significantly over-stated the problem, and this page has been published to help clarify the issues.

The terms "decline" and "dieback" are used by scientists, tree pathologists, foresters and arborists to describe a condition in which a number of damaging agents interact with one another to weaken trees and bring about their deterioration, sometimes resulting in premature death. These damaging agents can include insects, diseases and extreme weather conditions. Healthy trees can usually withstand attacks by the biological agents (pests and diseases) when they occur alone, but suffer significant damage if they occur at the same time as the trees are being stressed by other factors. For example, a healthy, unstressed tree is able to withstand an attack by a range of insects, but might suffer significant damage if it comes under prolonged attack when it is already severely stressed by drought.

2. Which species of oak does it affect?

3. What are the symptoms?

The symptoms are most noticeable in the foliage, usually as an initial deterioration in the appearance of the leaves – they can be a paler green than usual, or turn yellow – and there can be significantly fewer of them. If the condition persists, the leaf deterioration is followed by progressive deaths of fine twigs, and then branches, over a number of years. In the worst cases the whole tree dies. The tree therefore gives the appearance of dying from the top down.

No. There have been two previous serious episodes of oak dieback in Great Britain during the past century – during the early 1920s and between 1989 and 1994. Reports of it declined after 1994 for a few years, then began increasing significantly again from 1997 to the present.

5. Where is it occurring?

Most reported cases are in central, southern and eastern England. One of the highest-profile occurrences is in Charnwood Forest, Leicestershire, where there are high levels of oak mortality in some areas.

6. Does it occur anywhere else?

The exact nature of the condition is still not fully understood by scientists, and is the subject of on-going research. During the 1920s episode, defoliation by caterpillars of the oak leaf roller moth (Tortrix viridana) and damage caused by oak mildew fungus (Erysiphe alphitoides) were thought to have played a critical role. Scientists also noted the presence of honey fungus (Armillaria species) on the roots of many of the dead trees, but believed its role was principally to finally kill off trees that were already "irretrievably damaged". In the 1989-1994 peak, drought was considered to be a key factor, followed by attacks on the weakened trees by the buprestid beetle (Agrilus biguttatus). Exceptionally cold weather between 1985 and 1987 was thought to have been a factor in the 1980s peak in Germany. Research has also shown that infections of the fine roots by one or more species of Phytophthora fungi can predispose oaks to decline.

Sometimes. Trees have been observed to recover when one or more of the contributing agents reduces in number or severity. For example, many sickly trees affected during the 1920s showed a marked improvement in condition over the same period that the population of oak leaf roller moth declined.

9. Is the current episode any different from the previous ones?

Each episode of oak decline tends to have its own particular characteristics. In the current episode, the progress of the decline can be very rapid, with some individual trees dying within four years in the most serious cases. We will be working to understand what factors can cause such rapid decline.

10. What research is being done?

During 1998-2000, the Forestry Commission's Forest Research agency was involved in an EU-funded project on root pathogens of oak as decline-inducing factors. More recently, Forest Research has carried out a preliminary assessment of the current episode of oak decline, and plans to expand research in this area over the next few years.

11. Should we stop planting pedunculate oak?

No, we see no reason to discourage people from planting these magnificent and valuable trees, which play important roles in our environment, landscape and economy, and as a social resource for purposes such as recreation. There is always the possibility that some oak trees will be less affected by oak decline, and these could form the basis of our future populations of pedunculate oak, but we have to keep planting them so that we can identify these trees.

The best things that woodland managers can do to ensure healthy trees are to:

13. Is climate change a factor?

Possibly, but it's too early to know for sure whether it is playing a role in the current episode. However, we do know that most of the pests and diseases that currently affect British trees will benefit from the kinds of weather, such as milder, wetter winters, that we expect in Great Britain as climate change progresses.

Not unduly. It is always a cause for concern when significant numbers of important tree species appear to be under threat, but we need to keep things in proportion. Reported outbreaks are still relatively small and isolated, and the number of trees affected is still small in comparison with the total number of oak trees in Britain. (In terms of the area they occupy, oaks are the most widespread tree species in England, and the third most widespread tree species in Great Britain overall.) We also need to remember that trees and woodland live in cycles of natural phenomena such as climate, weather, and pests and diseases. These cycles can be measured in years and even decades, and there is a limit to what human intervention can do to influence their outcomes. The most important thing we can do is to research and understand the causes so that we can formulate good management advice for woodland managers. It is also important that we remain vigilant against accidentally importing new and damaging pests and diseases from outside Great Britain.

15. Where can I get further information?

More-detailed technical information is available in:

or ordera free printed version of the Information Note.