Reportable – see ‘Report a sighting’ below 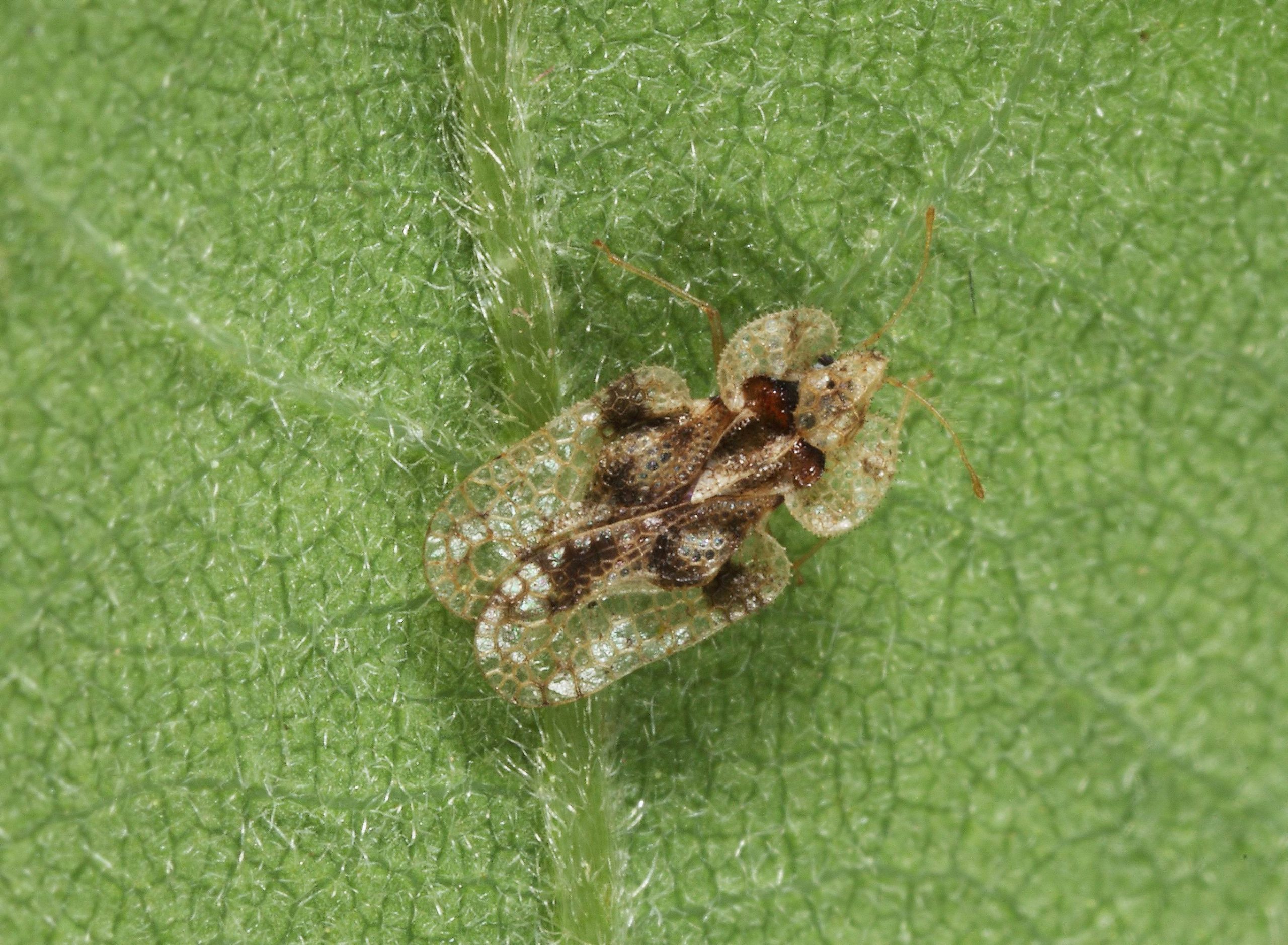 Oak lace bug (OLB) is an insect pest of oak trees (trees in the Quercus genus), and of several other broadleaved tree species. See ‘Susceptible species’ below for more details.

It can also cause a public nuisance: see ‘The threat’ below.

Oak lace bug’s native range is in North America. However, it has been introduced and become established in more than 20 countries in southern and central continental Europe, including our nearest neighbour, France, where it was reported in 2017. See ‘Origins and background’ below for further details.

The principal forestry concern in the UK is for our oak trees, which are the pest’s preferred host and one of our most populous native tree species. Although North American species of oak have co-evolved with the pest for many centuries, and have therefore acquired a level of tolerance through natural selection, European oak species have not. It is therefore reasonable to presume that European oak species are at least as susceptible as their North American relatives, and possibly more so. The UK’s native oaks are sessile oak (Quercus petraea) and pedunculate or ‘English’ oak (Q. robur).

The shortage of published research information available means it is currently difficult to set out the potential threat that OLB poses to the UK’s oak trees with any certainty.

In North America, OLB is regarded as a nuisance pest which causes only incidental damage and, occasionally, premature leaf fall. Its effects, therefore, are largely aesthetic and do not reduce the tree’s ability to store starches and sugars during much of the summer. Infested trees are usually able to perform adequate photosynthesis.

However, there is considerable variation in its reported impacts in Europe. Population levels in Croatia and Hungary in particular have reached levels which are causing concern to their forestry and plant health authorities about the impact it might have on oak health.

Oak trees play significant roles in our rural economy, landscape, biodiversity, ecology, environment and culture. Oak timber is one of our most valuable woodland products, and many businesses and jobs depend on it to some extent. In the UK, oak trees provide habitat for more other species than any other species of tree.

Accidental introductions of OLB, one or both of the North American lineages (NA1 and NA2) of the Phytophthora ramorum water mould, the oak wilt fungus Ceratocystis fagacearum, and the two-lined chestnut borer beetle (Agrilus bilineatus), could add to the pressure on our oaks, and risk pushing them into decline.

In large numbers, oak lace bugs can be a public nuisance: they have occasionally been reported to cause a skin irritation which can result in dermatitis when they come into contact with people.

OLB damages the plant by feeding on the sap in the leaves in a similar way to aphids.

The first signs of feeding damage are small, yellow spots (above) on the upper surfaces of leaves, often concentrated around the leaf veins.

As damage increases with each new generation, the yellow spots coalesce into large yellow and bronze areas on the affected leaves, also shown in the picture above. Heavy infestations cause the leaves to fall prematurely, before the normal autumn leaf fall. Damage to the leaves is visible during summer, and tends to progress from July to September.

The adults (bugs) are recognisable by their delicate, milk-white, lacy wings with variable brown markings (top picture). They can grow to 4mm long, and have rectangular wings. 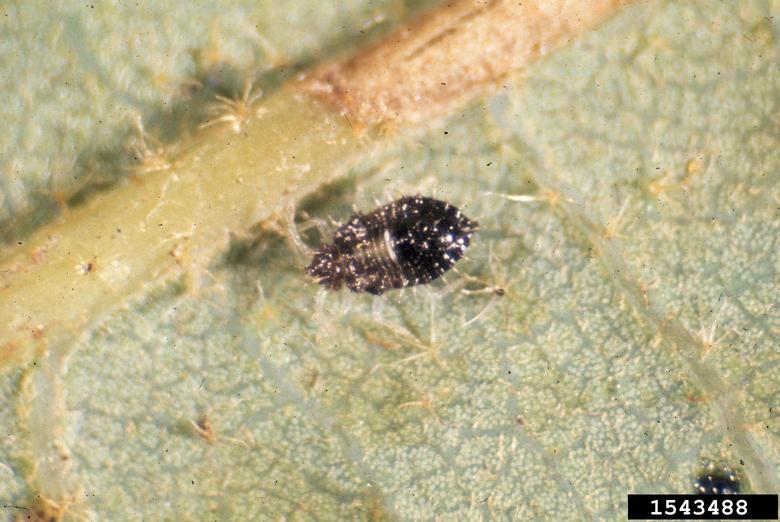 The nymphs (above) are flattened, wingless, black, spiny and oval, and grow to a maximum of about 2mm long. 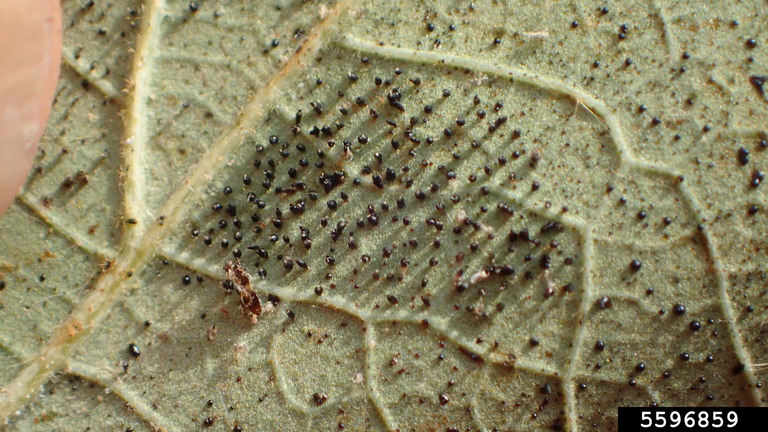 The eggs (above) are 0.5mm long, elliptical and brown, with a lighter-coloured lid. They are usually found in clusters along main leaf veins on the undersides of leaves.

The UK has several native lace bug species of its own, but none of them breeds on oak trees. There is therefore a good chance that a lace bug on an oak tree is an oak lace bug.

Other insects, such as leaf miners, can also affect oak leaves, but the relatively large 'mines' they make bear no resemblance to the damage caused by oak lace bugs.

Observatree’s identification field guide, this government pest alert and Rutgers University Plant Pest & Advisory website have more information and images to help identify the insect and its symptoms. Please note that some contact, reporting and website details given in the first two documents have been superseded by those given on this page, so where they are different, please use those given on this page.

Although oak lace bug is not thought to be present in the UK, there is a risk of its being accidentally introduced. We therefore encourage tree and ground-care professionals, oak and sweet chestnut tree owners and managers, and the public, to be vigilant for signs of it and to report suspected sightings immediately.

People receiving or handling imported oak and sweet chestnut planting material, and wood or wood products of the same species, should be especially vigilant.

In all cases, provide precise details of the location and, if possible, clear, well lit, close-up photographs of the pest or the symptoms of its presence.

Oak lace bugs can produce two or three generations a year. Beginning in the spring, the adults lay eggs on the undersides of leaves. The nymphs hatch from the eggs within days and go through five or six stages, known as instars, before reaching adulthood.

A complete life cycle takes 30 to 40 days, so there can be several generations each year.

Lace bugs are more prevalent in late summer and autumn, and adults and nymphs will be feeding at the same time in late summer. Some of each year's final generation of adults over-winter in bark crevices and other protective spaces to re-emerge and lay eggs the following spring.

The pest naturally spreads locally as the adults fly or are blown to new trees during the summer.

The principal pathway for long-distance spread is through transport of oak and sweet chestnut logs with bark, because it overwinters in bark crevices. The pest can also be moved on other types of plant material, such as plants for planting, and by ‘hitch-hiking’, i.e. by entering vehicles travelling long distances.

There is little that can be done to stop the natural movement of the pest, but its spread can be slowed by reducing the opportunity for it to be introduced accidentally, such as the steps being taken and listed under ‘Regulation’ and ‘Official action’ below.

Oak lace bug is not regulated at European Union level, because it is already present in several Member States.

However, the movement of oak trees into the UK is regulated under the protected-zone measures for oak processionary moth (OPM). These also provide a good measure of protection against introductions of OLB. Those regions in Europe with OLB also have OPM, so the same measures already reduce the risk of its being introduced on imported oak planting material.

See the Call for Evidence published by the Forestry Commission in March 2019 for full details of regulations being considered to minimise the risk of the pest's entering the UK.

Approving and controlling the main long-distance pathways for spreading OLB would be consistent with Action Oak objectives and actions.

The Forestry Commission and the main importers of oak roundwood (logs) have proposed a voluntary ban on imports from regions in continental Europe where OLB is present.

Hardwood mills and timber merchants have been working with the Forestry Commission to develop a system of voluntary controls to ensure that imports of oak logs are fully traceable to those regions where OLB is not known to be present.

Timber buyers are familiarising themselves with the symptoms of infestation through the Observatree identification guide to help them to detect OLB. This information is then being shared throughout the industry to avoid bringing in logs from new regions where OLB has become established.

Forest Research began setting up an early-warning system in 2020 in support of the measures outlined above. This comprises a network of sticky traps where OLB has the potential to enter England through ferry ports, as well as by siting traps at some of the larger hardwood log yards where stocks of imported timber are held before being processed. Trapping is assisted by Observatree volunteers.

This approach aims to gather intelligence about the pest and minimise the risk of introducing it to the UK by accidental means, and to provide the best prospects for early detection and action if it does arrive.

We are also taking part in a research project under the auspices of the European Phytosanitary Research & Co-ordination (EUPHRESCo) network. This project, known as the Oak Lace Bug in Europe (OLBIE) project, is working to evaluate the pest's status in Europe and develop survey, control and management strategies. Specifically, the project is addressing the following questions.

OLB was accidentally introduced to continental Europe some time before the year 2000, when it was detected in Italy. Since then it has spread rapidly, and is now believed to be present in more than 20 European countries. However, it is not yet known to be in the UK.

It is not known exactly how and when it was introduced to Europe, but the most likely pathway is with oak and/or sweet chestnut material imported from North America.