Acute oak decline (AOD) is a new disease mostly affecting oak trees in Great Britain. It is thought to have first established a presence in Britain during the last quarter of the 20th century. It is most prevalent on our native 'English' or pedunculate oak (Quercus robur) and sessile oak (Q. petraea).

Spatial epidemiology studies show that the disease can spread from tree to tree. It is therefore necessary to know where it occurs at the landscape level, as well as its distribution within sites. With this knowledge, we can map the distribution of AOD, monitor its spread, and predict at-risk areas. Then, through proactive management, we can prevent or curb the spread of the disease to unaffected areas, to protect trees not yet affected.

This work area was funded in part by the Forestry Commission and in part by Defra, and included collaborative work with Rothamsted Research and Cambridge University.

Forest Research holds a database of information about symptomatic oak trees reported to the Tree Health Diagnostic and Advisory Service (THDAS). Reports of symptomatic trees are collected and, where possible, verified. Collation of these reports has allowed the known distribution of AOD to be mapped. (See distribution map below.)

AOD was first defined in 2008-9 in Britain, but photographic and descriptive data are available from 2006 onwards, and so these early reports were assessed retrospectively. Public awareness of AOD has increased over time, and this has resulted in an increased number of reports to Forest Research.

When plotted as annual maps the distribution of confirmed affected sites can be seen to increase in southern England, with it now covering a band across the Midlands from East Anglia to the Welsh Borders. As of 2020, the disease had not been reported in Scotland or Northern Ireland. Initially verification was very labour intensive, but with the development of a rapid diagnostic tool the verification process has been speeded up. We now verify as many AOD reports as possible. 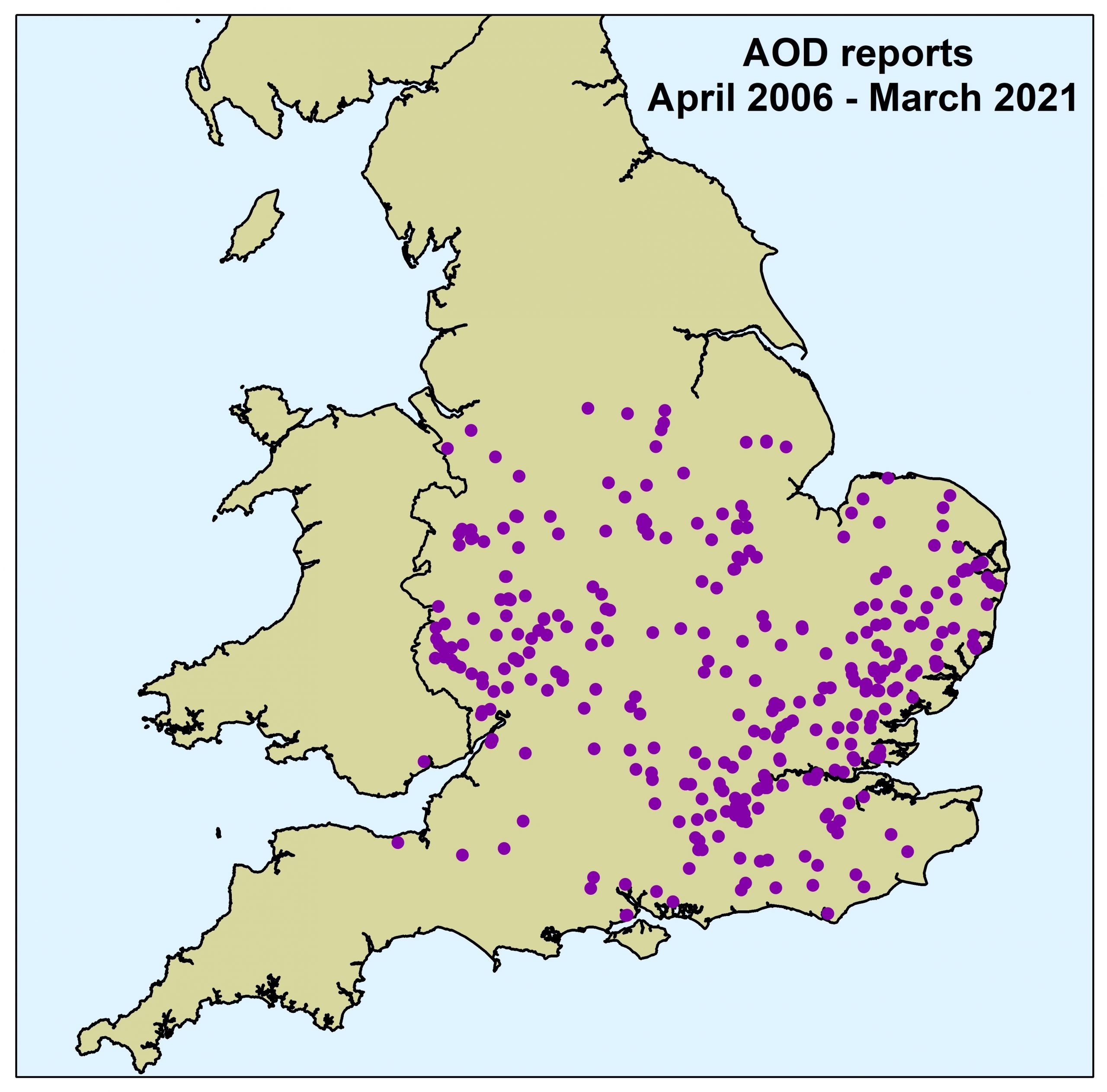 The map displays AOD locations of occurrence from 2006 to March 2021. AOD has been found mainly in England, being particularly prevalent in the London area, the South East and East Anglia, with the furthest north being around Delamere and Mansfield. AOD incidences have not been reported in Scotland but there are increasing occurrences along the Welsh borders.

Reports from landowners and managers provided a vital first impression of the extent of AOD across the country, and remain an important tool for early detection. However, reports are more likely from frequently visited woods, and depend on public awareness of the problem. A systematic survey was therefore undertaken to obtain a more accurate assessment of the true situation, and to identify areas not yet affected. Oak woods across England and Wales were visited by foresters and surveyors from Forest Research in the summers of 2013 and 2014.

The overall aim of this work area was to improve our understanding of the distribution of affected sites. By combining these data with epidemiological modelling, the project aimed to elucidate any environmental factors or processes that underlie the observed pattern, and thereby enable projections of the risk of future spread.

This project was a collaborative process between Forest Research, Rothamsted Research, Cambridge University and the Forestry Commission’s National Forest Inventory group. It has also involved the help and co-operation of many landowners, managers and stakeholders, including the National Trust, Woodland Trust, various wildlife trusts, and local councils, whom we thank. It was jointly funded by the Forestry Commission and Defra.

Epidemiological models of the spread and establishment of AOD in Great Britain were developed by using the data collected from the survey and from reports to our diagnostic service.  This work formed part of the Defra project, and was carried out in collaboration with Cambridge University and Rothamsted Research.

The models aimed to complement the available reports and survey by providing:

In addition, the epidemiological models allowed:

The map below shows the probability of where AOD would occur in England and Wales based on modelling of the significant predisposition factors of temperature, rainfall and levels of atmospheric nitrogen pollution. 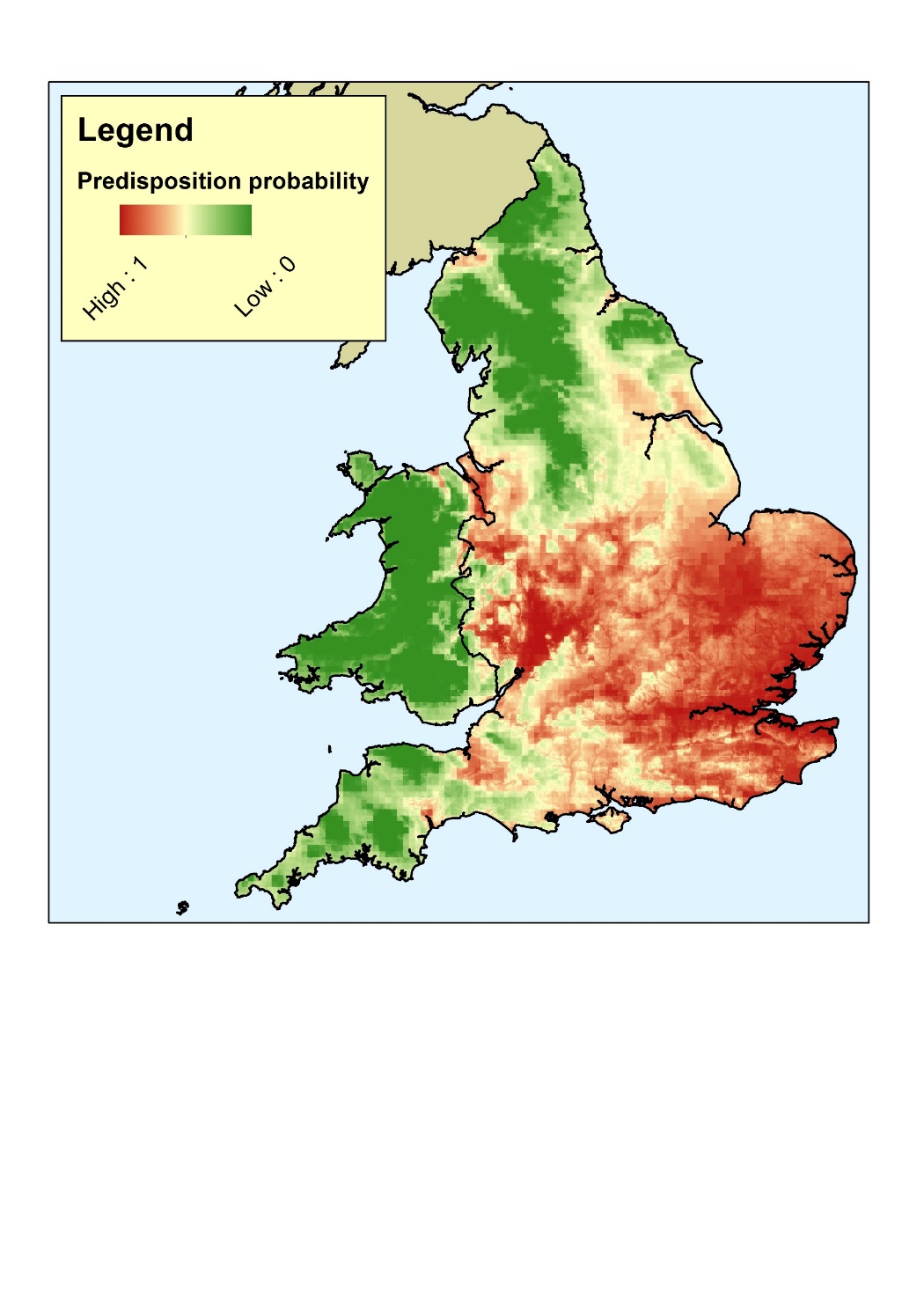