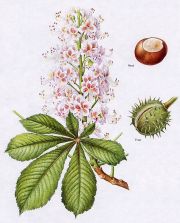 The National Forest Inventory estimates there are 470,000 horse chestnut trees in Great Britain: 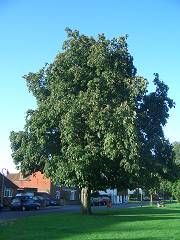 However, most of these trees are situated in non-woodland sites. Horse chestnut is only a significant component of British woodland (defined for this purpose as areas greater than 2 hectares) in a few cases – 51 hectares in England, 25 hectares in Wales, and none in Scotland.

Most of the horse chestnuts in Great Britain are probably not accounted for in any national tree census, but are common along streets and in parks and gardens as amenity trees. Both planted and self-sown individual trees also flourish along roadsides and in hedges.

Horse chestnut trees can tolerate a wide range of soils, including dry, sandy soils, wet clays and chalk, but they grow best in moist, well-drained soils.

The horse chestnut is prized as an amenity tree because of its striking flowers, which can be seen in early June each year, and its characteristic conker fruits that are produced in September.

The wood of horse chestnut tends to be rather weak, and for this reason it has never been widely used. However, it has absorbent properties that make it ideal for fruit racks and storage trays that keep the fruit dry and thereby prevent rotting.

Various extracts from horse chestnut leaves and fruits contain the active ingredients aescin and aesculin, and are marketed as herbal remedies because of their anti-inflammatory properties. Although the seeds, or 'conkers', are not edible by humans, they are used by cottage industries, more so in other countries, as ingredients in products such as soaps and cosmetics.

Horse chestnut also has wildlife value: the nuts provide food for deer and other mammals, and the flowers provide pollen for insects.

The seeds are used for the game of conkers.

Apart from the common or European horse chestnut (Aesculus hippocastanum), which is the only species native to Europe, there are 13 other species of Aesculus that are found throughout the Northern Hemisphere, mainly in eastern Asia and eastern USA. One is a hybrid. There are two species native to California in western USA, one of which is also native to north-western Mexico (Hardin, 1960).