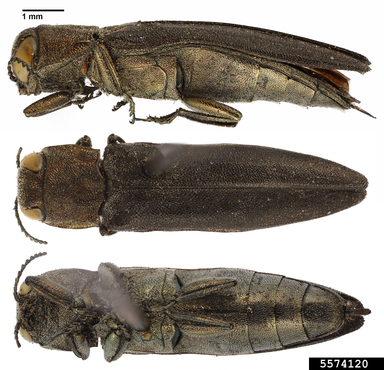 Bronze birch borer is a specialist wood-boring beetle pest of birch trees (species in the Betula genus). It is native to North America.

Bronze birch borer is not known to be present outside its native range in North America. There, it occupies a wide range of ecological and climatic conditions, although it is more common in warmer, southern regions.

Bronze birch borer larvae, or grubs (the immature life stage), affect host birch plants by boring into and feeding on the inner bark and cambium (the first layer of tissue under the bark). This action restricts or blocks the movement of water and nutrients through the plant, with serious consequences, including death, for some host plants.

It is mainly a secondary pest, attacking trees weakened by drought, old age, defoliation or soil compaction, although it has been known to attack healthy trees. In many cases, tree death occurs within a few years after the appearance of the first symptoms.

Although the pest is not known to be present in the United Kingdom (UK), there is a risk of its being accidentally introduced in the trade in live plants and wood materials. A Pest Risk Analysis was produced in 2011 by the European & Mediterranean Plant Protection Organization (EPPO).

All species of birch are susceptible to bronze birch borer attack, including the UK’s native silver and downy birch (Betula pendula and B. pubescens).

Initial symptoms of an infestation appear in the upper crown of the tree, with leaf yellowing in summer, and branch dieback.

Rust-coloured sap oozing, and staining, can also appear on the outer bark, along with swellings and bumps where the tree has healed inside.

Other evidence is the presence of 3 to 5mm-wide (0.15 to 0.2in), ‘D’-shaped exit holes in the bark (above) formed by the emerging adult beetles. Sinuous larval galleries are found under the bark (below). 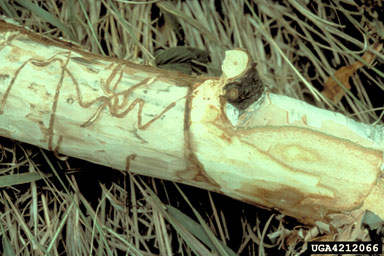 The eggs are white to creamy, becoming more yellow as they mature. They are oval and approximately 1.5mm long by 0.75mm wide. Females lay eggs singly or in clusters in bark crevices, and can lay up to 75 eggs. 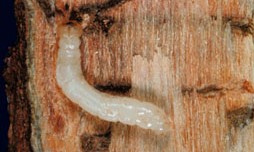 Larvae (above) are white to creamy, with flat top and bottom surfaces. The head is small, and protracted into the wide prothorax. There are eight abdominal segments, followed by two caudal segments. The final caudal segment terminates in two sclerotized, tooth-like styles (urogomphi). Mature larvae are 8 to 20mm long, and develp thorugh four instars or stages.

Because there is a risk of its being accidentally introduced, and because it is a quarantine organism requiring mandatory reporting, we urge the public, and especially tree and plant professionals, to remain vigilant for signs of it, and to report suspicious symptoms to the plant health authorities immediately.

Please note that TreeAlert and TreeCheck both require photographs to be uploaded. These should be clear, well-lit, close-up pictures of symptoms and/or the insect itself.

In nature, the pest is spread locally by adult beetles moving from tree to tree, although no clear data on the extent of adult spread is available.

Long-distance spread can occur through the movement of infested plants for planting and infested wood of birch species, with or without bark.

Bronze birch borer is a quarantine pest for the European Union (2014/78/EU), and is on the EPPO A1 list of quarantine pests with potential to cause extensive damage if introduced.

The UK Government website has details of the regulations governing the importation of:

If a breeding population of bronze birch borer were to be found in the UK, the initial response would be to try to eradicate the population before it could spread.
The contingency plan has full details of what the official response to an outbreak here would be.

If eradication could not be achieved, control action would focus on the targeted removal of the most seriously affected trees in the first instance, particularly those suffering from extensive canopy thinning and dieback. Thereafter management would aim to prevent or minimise the spread and impacts of the pest.

The adults (beetles) emerge from pupation under the bark of the host tree from May to mid-July, depending on climatic conditions.

They live for about 23 days, and need to feed on birch leaves almost constantly to become sexually mature, although their feeding damage is not considered significant. Once they are sexually mature, they mate and lay their eggs in cracks and crevices in the bark of stems or branches.

Pupation (the last stage before emergence as adults) takes place in shallow cells in the xylem in late April and early May, either the year after emerging from eggs, or, in colder climates or in otherwise unstressed trees, two years later.

The adults emerge to the exterior through holes which they bore through the bark.