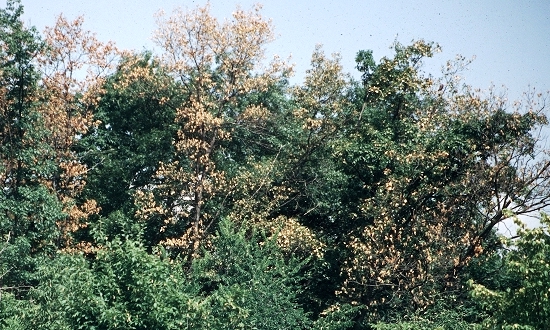 Oak wilt is a destructive disease of oak trees (trees in the Quercus genus) caused by the fungus Ceratocystis fagacearum (C. fagacearum), also known as Bretziella fagacearum (B. fagacearum). See ‘Origins and background’ below for further details about the names.

Oak wilt has been reported from more than 25 eastern and mid-western states of the United States. There are no records of its being found anywhere else.

The United Kingdom’s two native species of oak – sessile and pedunculate or 'English' oak (Quercus petraea and Q. robur respectively) – are among our most numerous and important tree species. They are important for landscape, biodiversity, ecological, environmental, cultural and economic reasons, and are already under stress from threats such as acute oak decline, chronic oak dieback,  oak processionary moth caterpillars (Thaumetopoea processionea) and two-spotted oak buprestid beetles (Agrilus biguttatus).

The destructiveness of the Ceratocystis fagacearum fungus means that it could cause significant damage to our oak population if it were to become established here. Infection is usually fatal.

All 58 North American native oak species are known to be susceptible to oak wilt disease to some degree. (This is despite only 16 of the approximately 600 species of oak species known worldwide being listed by the European & Mediterranean Plant Protection Organization (EPPO) as being susceptible.)

The most susceptible species are ‘red’ oaks, (that is, oaks in the Quercus section Lobatae; syn. Erythrobalanus), all of which are native to North America. Red oaks can die within months of infection.

Our sessile and pedunculate oaks are ‘white’ oaks (oaks in the Quercus section Quercus). However, white oaks are also susceptible to C. fagacearum: specimens artificially inoculated with it have been observed to die within as little as a year (Pinon et al. 1997). However, in the field death tends to take longer, and in some cases white oaks can recover from infection.

Tree species in several other genera within the Fagaceae family have also been reported to be susceptible to C. fagacearum in artificial inoculations. These include North American and European sweet chestnut (Castanea dentata and C. sativa respectively), North American chinquapin (Castaneopsis sempervirens), and species in the tanoak genus Lithocarpus (Rexrode and Brown 1983).

The first symptom to become visible is discolouration and dieback in the crown of infected trees (top picture). Symptoms in red and white oaks begin to appear within weeks of infection, when yellowing of the leaves occurs, particularly along the veins. 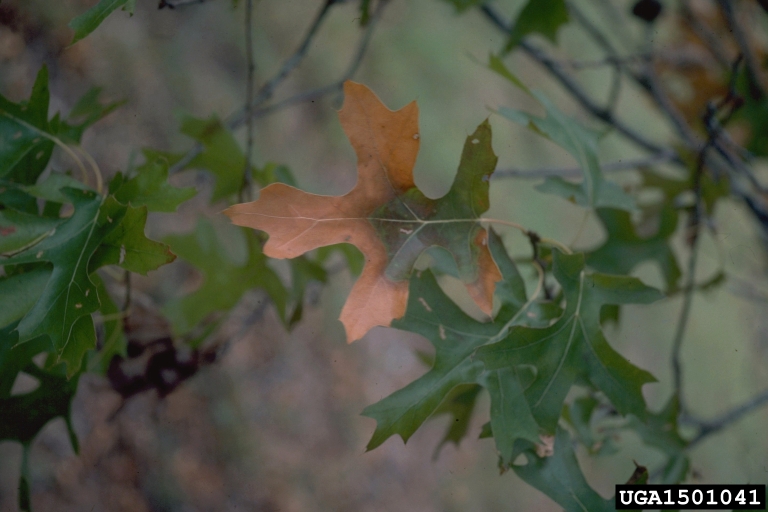 This is followed by ‘scorch’, or browning (above), typically starting at the tip of the leaf. There is a clear demarcation line between the dead and live tissues. Within a short time, the affected foliage develops a false autumn colour (below) as the tree wilts from the top downwards. 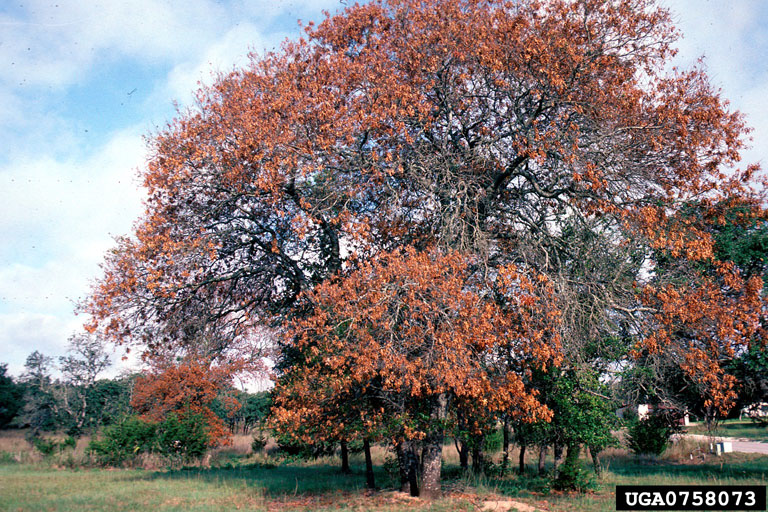 Elongated cracks are sometimes present on the trunks of infected, dying red oak species (below). 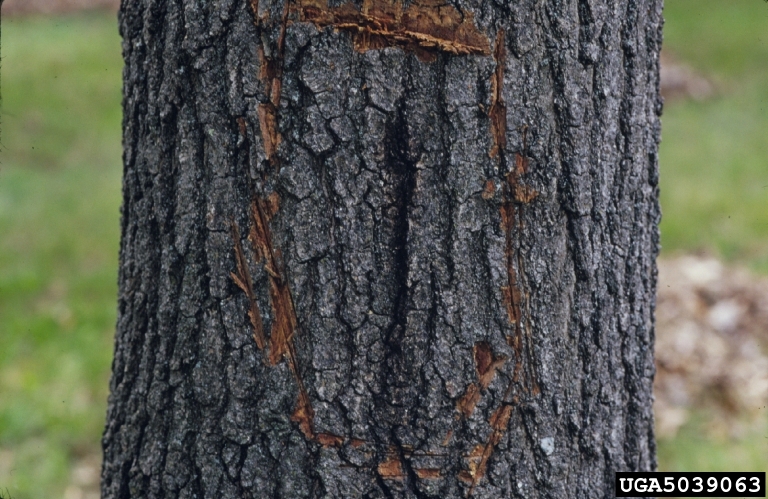 These are caused by turgor pressure exerted by the formation of fungal sporulation mats under the bark of the trunk and large branches (below). Infected red oaks can die within four to six weeks. (Turgor pressure is the fluid pressure inside plant cells.) 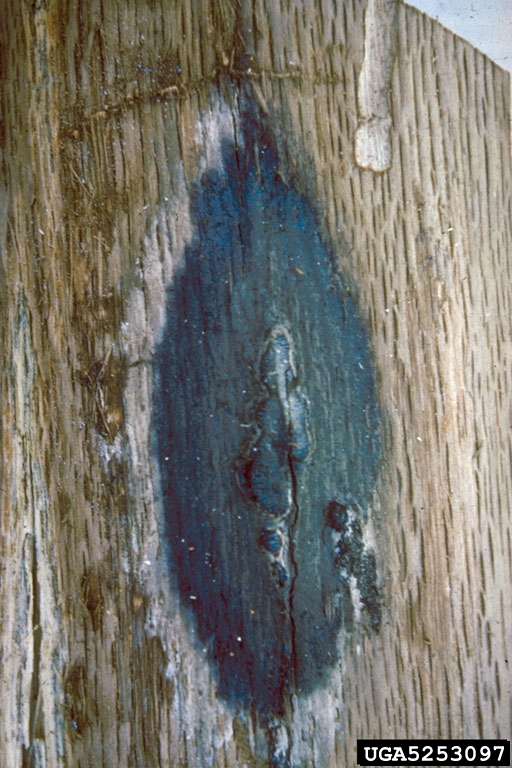 These mats are grey or tan when exposed by removing the bark, are generally produced in late autumn or early spring, and remain visible for two or more weeks.

Note that fungal sporulation mats and resultant bark cracking are not usually seen in infected white oaks, so these are unlikely to occur in our sessile and pedunculate oak. However, they might occur in other species of oak growing in the UK. This is because the distribution of fungal spores is more restricted in white oak species, occurring only in the xylem (water-conducting tissues) of the current year’s growth.

As a result, white oaks react more slowly to the disease than red oaks, usually dying one branch at a time. The discoloration and wilting of leaves in white oaks is similar to that seen in red oaks.

Although the C. fagacearum / B. fagacearum fungus is not known to be present in the UK, there is a risk of its being accidentally introduced. We therefore urge the public, and particularly importers of wood and plant materials, and tree and plant professionals, to remain vigilant for signs of it, and to report suspicious symptoms immediately.

Anyone who suspects they have seen a case of oak wilt in the wider environment (outside plant trade or wood trade premises) must report it immediately to the plant health authorities.

Note that TreeAlert and TreeCheck both require clear, well lit, digital photographs of the symptoms of the disease.

Sap-feeding beetles are key components in the spread of the fungus. Beetles are attracted to enter the tree though the cracks made in the bark by the pressure from the fungal mats beneath. They pick up fungal spores on their bodies, which they then carry into wounds in healthy trees, thereby spreading the disease.

Oak bark beetles are also attracted to stressed oak trees, so they, too, can pick up the spores and spread them in a similar way.

Root grafts are also a significant pathway by which the disease can be spread. (Root grafting is the natural underground joining together or inter-twining of the roots of plants close to one another).

A graphic showing the life cycle and means of spread of the fungus is included in the Forestry Commission’s oak wilt contingency plan – see ‘Official action’ below.

Management of oak wilt typically includes soil trenching (below) to sever root grafts and protect adjoining oaks, as well as removal of infected trees, preferably before the next beetle flight season. 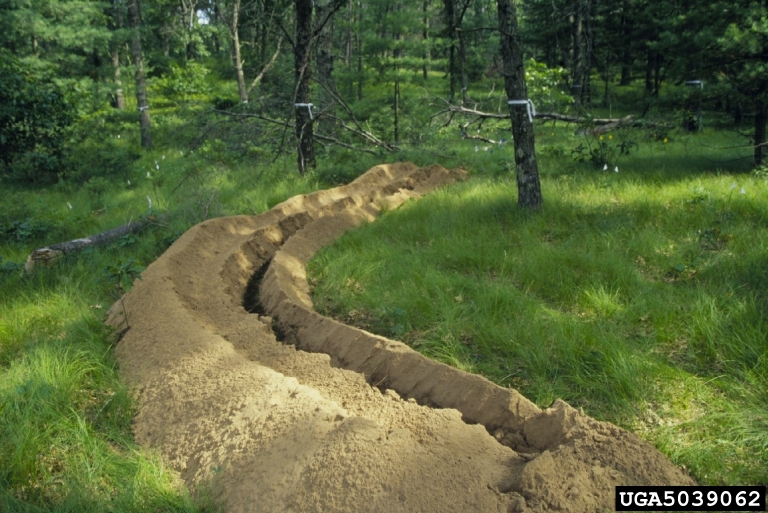 Injecting trunks with fungicides (below) can be used as a preventative measure to protect high-value individual trees or small groups of trees. However, it is an expensive, labour-intensive process, so it is not usually a practical solution for large numbers of trees. 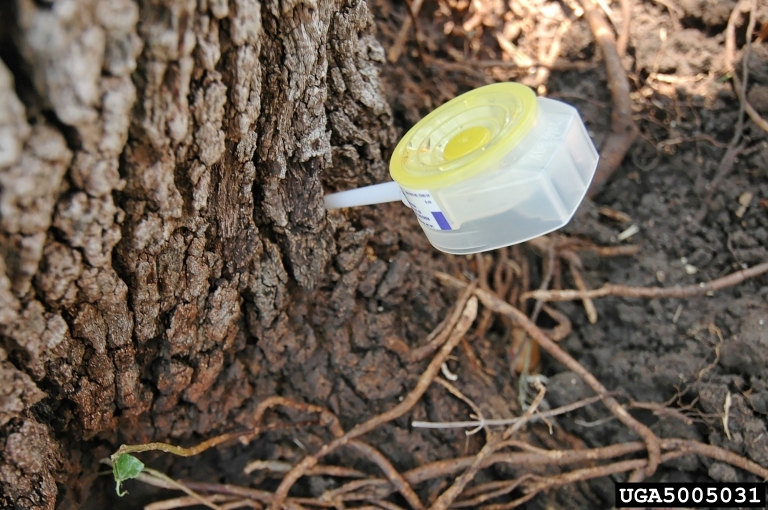 The regulations governing the importation into the United Kingdom of wood and wood products, including oak wood from Third Countries (non-European Union countries such as the United States), are presented on the UK Government website.

The actions which would be taken if oak wilt were discovered in the UK are set out in the Forestry Commission’s contingency plan.

Oak wilt was first described in Wisconsin in 1944, when oak trees were found dying in localised areas. However, the origins of the fungus are not known: some evidence, such as the existence of some comparatively tolerant native North American species of oak trees, suggests that it could be native to the United States.

However, other evidence, such as the fact that the known populations of C. fagacearum have experienced a significant genetic bottleneck, points to its being an introduced species from a single introduction, rather than a native one. Supporting this is the existence of several highly susceptible North American oak species, indicating that they have had too little time to adapt to, and develop tolerance of, the fungus.

A 2008 paper discussing its origins is available in the Annual Review of Phytopathology.

In 2017 it was proposed that the oak wilt fungus more appropriately belonged to a new genus, Bretziella. Therefore the name Bretziella fagacearum is now also used.