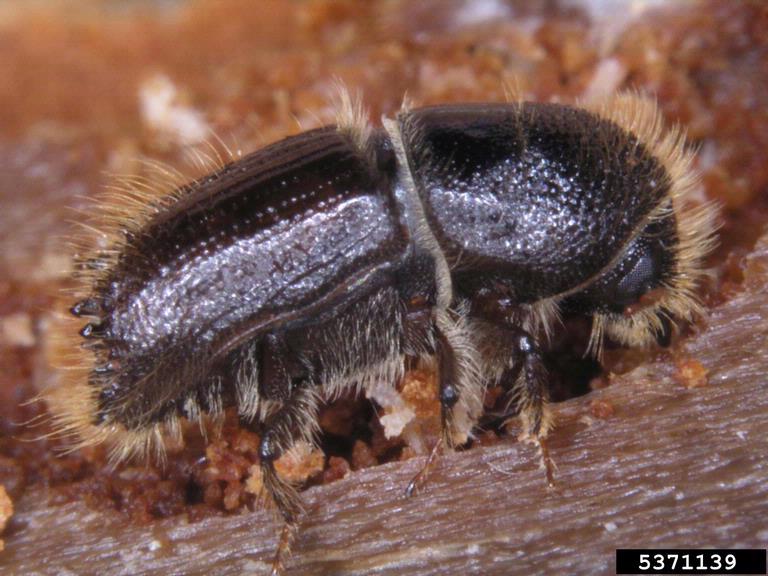 The larger eight-toothed European spruce bark beetle is a destructive pest of spruce trees (trees in the Picea genus) as well as some tree species in other conifer genera.

Larger eight-toothed European spruce bark beetles are present in spruce trees, especially Norway spruce (Picea abies), in most of continental Europe. The range extends from Russia and Scandinavia in the north to Italy, Slovenia and Bosnia-Herzegovina in the south, and France, Belgium and The Netherlands in the west.

It is also present in China, Japan, North and South Korea, and Tajikistan.

An outbreak (breeding population) was discovered in the United Kingdom. This was situated in a woodland in Kent, England, in December 2018, and is currently subject to statutory eradication action.

Since 2018, the Forestry Commission has been conducting enhanced surveillance across the South East of England, including via the use of a network of traps. Beetles are routinely caught in these traps, likely as a consequence of the beetles being blown into the area from mainland Europe.

In 2021, several further outbreaks of Ips typographus have been found in Kent and East Sussex, and these are subject to further surveillance and official action.

(See ‘Official action and regulation’ below.)

Although the beetle is mainly a ‘secondary pest’, preferring dead, stressed or weakened trees, under the right environmental conditions its numbers can increase enough to result in attacks on healthy trees. If left uncontrolled, the beetle could cause significant damage to the United Kingdom’s spruce-based forestry and timber industries. This is especially so where pathogenic (disease-causing) fungi are present, because the beetles can spread them. Blue-stain fungus (Endoconidiophora polonica) in particular is associated with larger eight-toothed European spruce bark beetle in continental Europe.

Sitka spruce (Picea sitchensis) is widely grown in the UK, especially in western and northern regions, where it is well suited to the wetter climate. Hundreds of millions of pounds of business investment and thousands of jobs in nurseries, forests, timber transport, sawmills and other wood-using industries depend on it to some extent. Norway spruce (P. abies) is also grown, although the area planted with it has been declining as many growers prefer to switch to other species, including Sitka spruce, when replanting harvested sites.

Most species of spruce are susceptible to attack by eight-toothed spruce bark beetles, and the widespread presence of Norway spruce in continental Europe means it is the most affected species.

The beetles have, however, been observed on other conifer tree species, including fir trees (Abies species), pines (Pinus species) and larches (Larix species).

Larger eight-toothed European spruce bark beetles are often associated with windblown, damaged and recently-felled spruce trees, where they build up numbers before moving on to attack adjacent live trees. Inspection of trees in this category should therefore be a priority.

Look also for individual dead trees, or groups of them. The latter arise when the beetles “mass-attack” trees, overcoming the trees’ usual defences by a combination of large numbers and blue-stain fungus. This phase can lead to extensive tree deaths.

If a tree is infested with eight-toothed spruce bark beetle, inspection of the bark, and the wood under the bark, should reveal a linear gallery system, where the females lay their eggs. 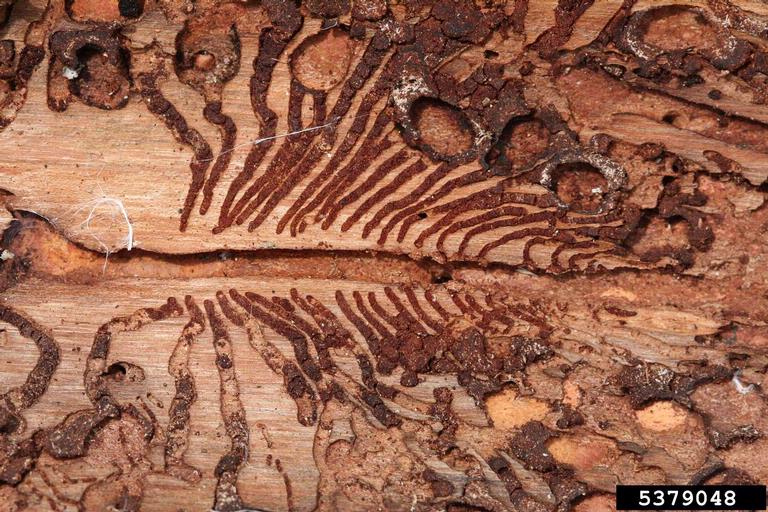 Larval galleries radiate outward from these linear galleries, as pictured above, becoming wider as the larvae grow as they burrow along. This gallery pattern is unique to this species, and can therefore be relied upon as an indicator of its presence. However, the pattern might not always be as easy to discern as the above description and picture imply, so any variation should be treated with suspicion and investigated further.

Ips beetles are often referred to as ‘engraver’ beetles because of the ‘engraved’ appearance of the galleries, as in the picture below. This characteristic also gave rise to its scientific name ‘Ips typographus’, typography being the art of engraving. Adult beetles hibernate over winter under the bark of trees, logs and leaf litter. They then re-emerge in spring, when the temperature rises above 20°C. Like all beetles in the Ips genus, they have distinctive spines on their posterior end.

The discovery of outbreaks in Kent and East Sussex highlighted the risk of accidental introductions and subsequent spread, and the need for us in the UK to be constantly vigilant for this pest. Suspected sightings must be reported immediately to the plant health authorities.

Please note that TreeAlert and TreeCheck both require photographs to be uploaded. These should be clear, well-lit, close-up pictures of symptoms, and/or the beetles themselves.

The species can expand its range naturally, assisted by its ability to detect suitable host material, especially dead or stressed and weakened trees. This is especially so after environmentally disruptive events which kill or stress large numbers of trees, such as storms, droughts and severe fungal attacks. The resulting abundance of new host material can lead to rapid population increases, which can then impel the beetles to attack healthy trees.

It can also be spread in movements of infested logs and firewood in trade.

Ips typographus is endemic to mainland Europe, but until 2018 it had not been known to be present in the UK. Ips typographus is therefore regulated as a Quarantine Pest to protect us from the introduction of the beetle.

See Regulated European Union (EU) trade and plant passporting requirements for an explanation of the controls on moving conifer material in Great Britain.

The Forestry Commission’s contingency plan sets out the steps that would be taken – and which were taken in the 2018 Kent event, and are being taken in the current event in Kent and East Sussex – if an outbreak of larger eight-toothed European spruce bark beetle were discovered in Great Britain.

The species is subject to the Plant Health (Ips typographus) (England) Order 2019, which gives the Forestry Commissioners powers to take steps to prevent spread of the pest from outbreak sites. More-detailed information about these powers and restrictions, and the actions taken in Kent and East Sussex, is available on the UK Government website.