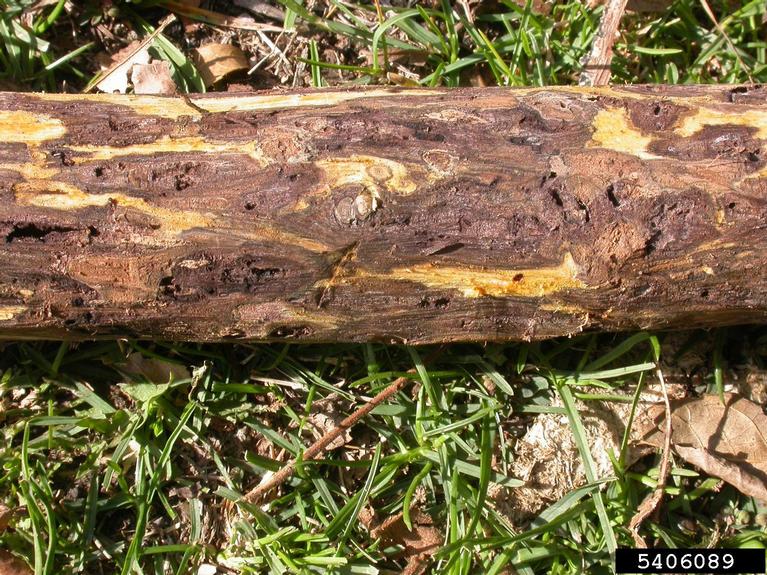 Thousand cankers disease is caused by the fungus Geosmithia morbida. It is believed to be able to affect all species of walnut trees (species in the Juglans genus), with black walnut (Juglans nigra) being particularly susceptible. 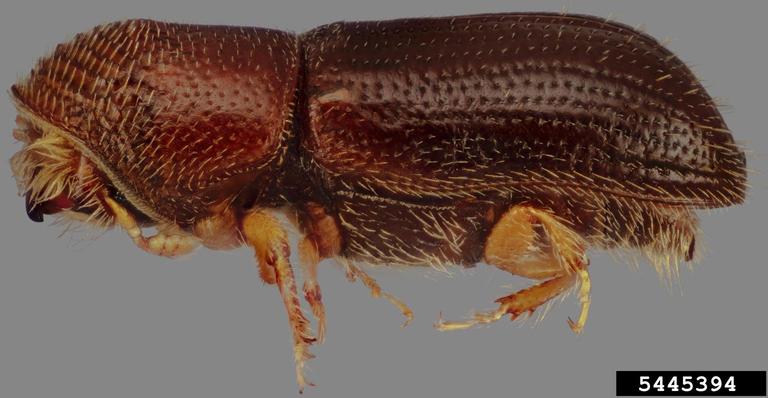 The fungus is spread by the walnut twig beetle (Pityophthorus juglandis), pictured above.

It is called ‘thousand cankers’ disease because every fungus-carrying walnut twig beetle which bores into the tree triggers a canker around the hole as the fungus infects the surrounding plant tissue. Eventually the tree is overwhelmed by the large number of cankers which develop on it. The top picture shows a branch with several cankers which have developed around twig beetle galleries.

Thousand cankers disease is present in several eastern and western states of the USA, and in the Lombardy region of Italy.

There is a small walnut-growing industry in the United Kingdom supplying the nut and hardwood timber markets. It predominantly uses common walnut (J. regia), which is also known as English, Persian or Circassian walnut. This industry would be threatened if the disease were to become established here. Otherwise, walnut trees are mostly grown singly or in small numbers to supply their owners with nuts and for amenity purposes.

The nut supply and timber industries in the USA are estimated to have lost tens of millions of dollars’ worth of production to thousand cankers disease, with associated job losses and business failures. Although the timber from diseased trees is useable, the supply of walnut timber is declining as the disease takes its toll, especially in the west.

The fact that the disease has only recently been described and is not yet fully understood means we advise a cautious approach with a view to keeping it, and the walnut twig beetle, out of the UK. This is partly for the reasons above, but also because it is not yet known whether the fungus could infect other plant species in other genera, nor how damaging it might be on other species.

All species of walnut in the Juglans genus are thought to be susceptible to thousand cankers disease. Black walnut has hitherto been observed as the most susceptible in the United States, with other species showing varying degrees of susceptibility. Some North American walnut species, particularly western species, seem able to tolerate the fungus, often exhibiting only minor cankers on small branches.

There is currently little information about the susceptibility of common walnut, the species most grown in the UK, and this requires further research. However, it is reported to be among the trees affected in Italy.

Some species of wingnut tree (species in the Pterocarya genus), which are native to China and South-East Asia, can also be affected.

Trees infected with thousand cankers disease usually exhibit readily visible external symptoms only when the disease is in its end stages. 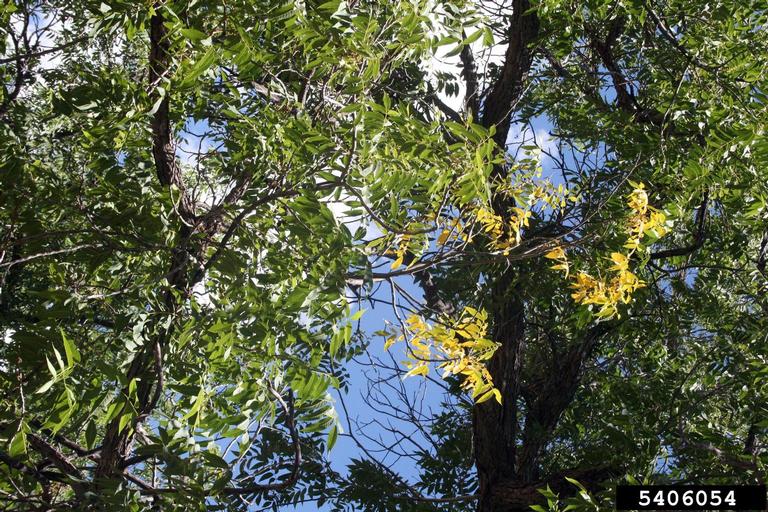 Leaf yellowing on the exterior of the crown is often the first symptom, and it might at first be restricted to a single branch (pictured above). However, increasingly large areas of the tree are affected as the cankers girdle the trunk and/or branches. 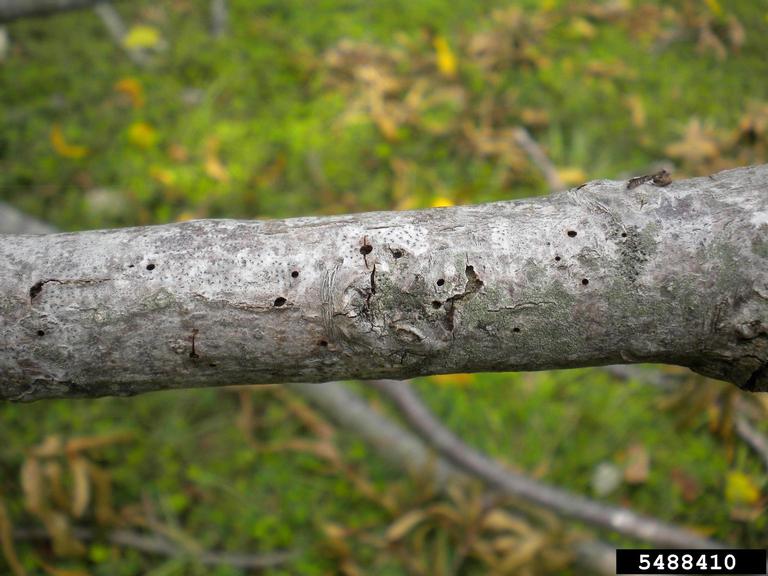 Close examination of a diseased tree’s bark surface might provide further evidence that thousand cankers disease might be the cause of symptoms. Such examination might show pin-hole sized entrance and exit holes (above) made by walnut twig beetles. Dark, wet, inky, oval-shaped cankers might be found near these holes (below). The cankers are small, but repeated feeding and egg-laying by beetles on the same tree can result in the production of a large number of them, which eventually coalesce into one another. 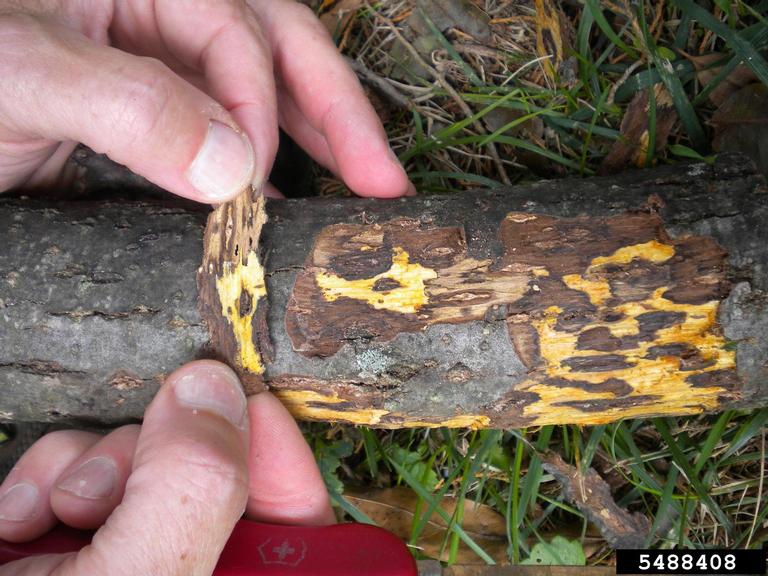 Removing the bark of cankered areas might reveal the beetles’ feeding and reproductive galleries, as well as areas of necrotic phloem tissue.

As the beetles and the fungus spread through the tree, new cankers form and coalesce, girdling branches and cutting off the tree’s nutrient conduction system.

The tree often sprouts new branches (known as epicormic growth) from the trunk as the branches in the crown die.

Although thousand cankers disease is not currently known to be present in the UK, we must remain vigilant to the possibility of accidental introductions. This has become especially important since its discovery in Italy, a near neighbour and trading partner in continental Europe. We particularly encourage tree and plant professionals to be vigilant and report suspected sightings.

Please note that TreeAlert and TreeCheck both require photographs to be uploaded. These should be clear, well-lit, close-up pictures of symptoms and/or the suspected walnut twig beetle

In all cases, provide precise details of the location and, if possible, clear photographs of the pest or symptoms.

The UK Government website has details of the plant health regulations which apply to the importation of plants and other planting material, and wood and wood products.

Phytosanitary (plant health) measures have been taken in the USA to protect American states which are still free of the disease. These include restrictions on the movement of walnut wood and walnut plants for planting.

To prevent or minimise spread, infected trees are removed and immediately destroyed by grinding or burning. No chemical, cultural or biological control methods are currently available. Nor are tolerant varieties of black walnut available

Good biosecurity practice is advised for people visiting or working at sites where walnut twig beetles and the G. morbida fungus are, or might be, present.

Walnut twig beetles accumulate fungus on their bodies when they visit infected trees. They then carry the mycelium and conidia of the fungus on to healthy trees as they burrow into them, forming galleries in the tree as they do so. The adults (beetles) typically move horizontally, while the larvae (grubs) move vertically, with the wood grain.

As they move through the wood, the beetles deposit the fungus, which is then introduced into the phloem (the tissue layer which transports food from the leaves to other parts of the tree). Cankers then develop around the galleries, quickly girdling the tree.

The G. morbida fungus is believed to be native to the western USA, but was described for the first time only as recently as the early 21st century. This resulted from investigations of widespread branch dieback and deaths of black walnut trees which had been observed in western states since the mid-1990s. In 2008, the cause was determined to be the result of a combination of feeding damage by walnut twig beetles and subsequent canker development caused by the fungus deposited by the beetles around their galleries.

The disease is now widespread in western states, and has become established in several eastern states, where black walnut is a native species. The first finding in the east occurred in Tennessee in 2010.

It was then identified in Italy in 2013. Its spread to Italy and eastern states of the USA most likely occurred in movements of walnut wood or plants infested with fungus-carrying walnut twig beetles.

One hypothesis as to why the fungus has become a problem after centuries of causing little concern is based on the fact that the native territories of the fungus and the black walnut are geographically separate: the fungus is native to western USA, and black walnut is native to eastern USA. Western species of walnut are able to tolerate the fungus, and it is thought that widespread planting of black walnut in western states in recent decades provided a highly susceptible species for the fungus to live on and increase in ocurrence.

At the same time, increased movements of wood and plants in trade would have then facilitated its spread, and that of the walnut twig beetle, out of western states.