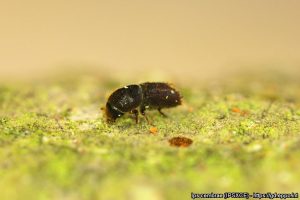 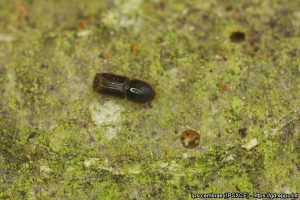 Other scientific names of I. cembrae include Bostrichus cembrae, I. cembrae engadinensis, I. shinanoensis, and Tomicus subelongatus. It is morphologically very similar to the Asian species I. subelongatus, also a larch bark beetle; gene sequence analysis has found, however, that the two species are distinct.

Ips cembrae is only present in Europe (including non-EU regions of Central and Northern Russia, Ukraine, Switzerland and mainland United Kingdom). The beetle occurs throughout the natural and most of the planted range of L. decidua, as well as that of L. kaempferi. There are some areas within the UK where I. cembrae is not present. These areas include Northern Ireland, the Isle of Man, and the “Pest Free Area” (PFA) in West Scotland. In the EU, “Protected Zone” status is given to areas free from I. cembrae, such as Greece and Ireland. Although it has been reported in Asia, these accounts are more likely of the closely related species I. subelongatus.

Ips cembrae is primarily a pest of L. decidua but can also attack exotic larch species planted in Europe, such as Japanese larch L. kaempferi and hybrid larch Larix x eurolepis. It has also been observed to breed in fallen Pinus and Picea species when there is a limited availability of larch hosts.

Within Northern Ireland, the Isle of Man, and the PFA, I. cembrae is considered a quarantine pest, and thus phytosanitary measures are in place to prevent its introduction to these areas. Outside of these regions, I. cembrae is widespread and is not considered a quarantine pest. Within both its natural and introduced range (mainland UK, Netherlands, and Sweden), the beetle is usually a secondary pest that attacks trees already weakened by contributory stress factors, e.g. environmental stress or damage by other pests and diseases. It is, therefore, a much less damaging pest than the closely related Spruce bark beetle, I. typographus, and the risk presented to the quarantine areas is much lower. Nevertheless, if there is an abundance of suitable breeding material, enabling a substantial increase in the population size, then attack of live standing trees can occur. Suitable breeding material includes recently felled logs, windthrown stems, and dying trees, and therefore fresh thinning residues and storm-damaged trees increase the risk posed by the beetle. Large populations can also cause damage to live standing trees through the maturation feeding carried out by adults on young twigs.

Ips cembrae is associated with numerous species of fungi including ‘ophiostomatoid’ or ‘blue stain’ fungi. The most notable of these is Ceratocystis laricicola, which kills bark and cambium in the host tree, stains the sapwood and likely contributes to the dieback and killing of larch during I. cembrae outbreaks.

Frass ejected by tunnelling adults may collect on bark around entrance holes or on the ground below. Adult maturation feeding within the twigs of healthy trees can lead to significant foliage loss where populations are large, and twigs broken by their tunnelling may be found at the base of host trees. Woodpecker activity (pecked holes) may be abundant where there are many galleries beneath the bark. Canopy dieback and needle discoloration are key signs that a tree has been severely attacked. Aerial surveillance can be used to identify groups of potentially attacked trees and followed up by ground surveys to confirm the presence of an infestation. Removal of the bark from infested material will expose the distinctive I. cembrae gallery systems and larvae, pupae and adults where galleries are still active. 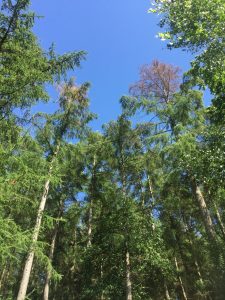 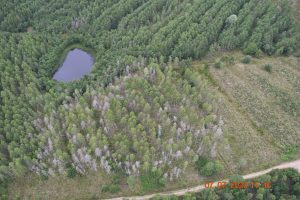 Bark beetle traps containing a pheromone bait can be used to monitor the population levels of I. cembrae during their flight period. Adults caught in traps must be formally identified to confirm they are I. cembrae and not similar bark beetles.

The accidental introduction and subsequent spread of Ips cembrae to mainland Britain highlights the importance of preventing such introduction to Northern Ireland, Isle of Man, and the PFA (described in Pest-free areas list). Any sightings in these locations must be reported immediately to the plant health authorities.

Please note that TreeAlert and TreeCheck both require photographs to be uploaded. These should be clear, well-lit, close-up pictures of symptoms, and/ or the beetles themselves.

Although laboratory experiments have demonstrated that adult Ips species can fly continuously for several hours, potentially covering tens of km, they have only been observed to fly limited distances in the field. Dispersal is usually downwind and towards nearby suitable host material.

The beetles can also travel long distances via human-assisted transport means, such as infested wood, bark or wood packaging material.

Ips cembrae adults disperse by flight on warm days from late April until late summer. There may be one or two generations each year depending on the length of the summer season in a given location. Peaks in flight activity are usually seen in May and August. Breeding takes place under the bark of the host, creating distinctive gallery systems. Males tunnel into the bark of suitable material and excavate a nuptial chamber in the phloem. They then release an aggregation pheromone, attracting females (as well as other males) to the host material. Up to 5 females join each male and form individual maternal galleries, along which up to 50 eggs are laid, radiating away from the central nuptial chamber. Larvae hatch from these eggs and feed perpendicularly to the maternal galleries until they pupate. New adults are initially light brown, darkening to dark brown and eventually black once they have maturation fed, at which point they are reproductively mature. Larvae, pupae and young adults can overwinter under the bark of host trees and mature adults can overwinter in the forest litter. 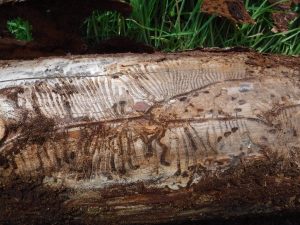 Population build-ups should be prevented by disposing of felling and thinning residues promptly, for example by chipping and burning. Cut logs should be removed from sites before the adult flight season occurs to prevent colonization. Highly stressed larch stands, e.g. those planted at drought-prone sites, may be pre-emptively felled or thinned.

For areas of the UK where I. cembrae is considered a quarantine pest introduction within timber must be prevented by employing phytosanitary measures including the debarking of wood and heat treatment of wood, barks and chips.

See Regulated European Union (EU) trade and plant passporting requirements for an explanation of the controls on moving conifer material in Great Britain.

It is believed that I. cembrae was introduced to Great Britain within timber shipments from Germany in the late 1940s.