Home Tools and Resources National Forest Inventory About the NFI

The National Forest Inventory (NFI) is a rolling programme designed to provide accurate information about the size, distribution, composition and condition of our forests and woodlands and also about the changes taking place in the woodlands through time. It is essential for developing and monitoring the policies and guidance that support the sustainable management of woodland.

This page has information on: 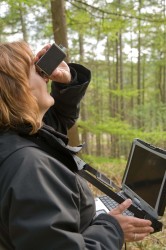 We have carried out woodland surveys and compiled forest inventories at 10–15 year intervals since 1924. Because forests and woodlands are dynamic and can change a great deal over the years, it is important that information is kept up to date. The NFI, which started in 2009, is the latest of these periodic surveys to gather information and keep it current across Great Britain.

NFI data and reports are used by many people and organisations involved in forestry and land management, and in the wider world of planning, policy development and business.

The NFI covers any forest or woodland in Great Britain of at least 0.5 hectares in area with a minimum width of 20 m, and that have at least 20% tree canopy cover (or the potential to achieve this). This ensures that the NFI outputs are compatible with outputs from other European forest inventories so that we can share and report data internationally.

We are also interested in smaller areas of woodland. This includes smaller woods (0.1 to 0.5 hectares), trees in linear features (hedges), trees in groups and single trees. Data for these ‘small woods’ are based on sample field survey and/or newly emerging high resolution remote sensing data.

The NFI programme works closely with the FC’s plant health teams and with other colleagues to provide information to help estimate impact and to formulate policy in response to outbreaks of disease and in response to natural events such as storms which can affect Britain’s woodland.

The location and extent of all forests and woodlands (0.5 hectares and over) is stored and maintained as a digital woodland map that can be rolled back in time to give estimates of change between reporting periods as well as an accurate picture of the current woodland. The maps distinguish between various forest types for example conifers, broadleaves or mixed.

A sample of forests and woodlands are ground surveyed with the surveys taking place over a 5-year period. The survey teams visit a representative sample of approximately 10,000 one hectare (100 m x 100 m) plots across Britain. These sites have been randomly selected so that the information needed for the survey can be gathered efficiently.

The first assessment of the approximately 10,000 one hectare sample sites (the first ‘cycle’ of assessments) took place between 2009-2015 with the second ‘cycle’ of assessments taking place between 2015-2020.
About two thirds of plot locations are permanent and will be revisited by the survey team during the second and subsequent ‘cycles’ of ground surveying. Repeat visits allow changes to be monitored, and tree growth to be calculated. Other randomly selected plots are visited one time only to provide flexibility in the overall sample and to ensure that the NFI provides a valid snapshot of the woodland in GB.

The NFI ground survey collects a varied range of qualitative and quantitative information from the one hectare sample site including: 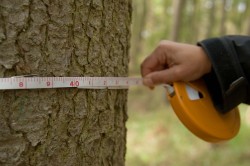 The NFI survey manual provides a detailed description of the assessments made during field data collection and the protocols used by the field surveyors in collecting the data.

A dedicated Quality Assurance (QA) team undertake visual checks of 100% of the ground sample assessments. Additionally, they reassess a minimum of 5% of sample sites.

Sometimes regional, business or sectoral interests fund the surveying of additional ‘top up’ sample squares within a defined geographical area or stratum. This increases the sampling intensity within such target sub-populations, thus providing more accurate information on the target area or for addressing specific issues. Within the NFI we call this the ‘top up’ principle. Please contact us if you would like more information about the ‘top up’ scheme.

This information, when combined with the Forestry Commission growth and yield models, is used to provide a snap-shot of Britain’s woodlands, not only in terms of timber metrics such as stocked area, standing volume and increment, but also in terms of the health, condition, biodiversity and  social state of woodlands. Our analysis tools also link with biomass and carbon models to enable us to provide estimates of the biomass and carbon stocks in live trees standing in Britain’s woodlands.

By applying a range of management scenarios (describing harvesting and restocking regimes) we forecast the estimates of timber availability and increment and also the corresponding standing volume remaining in woodland.

NFI analyses and reports are usually published for GB, country and NFI reporting regions (which equate to the NUTS 1 regions – see https://en.wikipedia.org/wiki/NUTS_of_the_United_Kingdom for a brief description OR http://ec.europa.eu/eurostat/web/nuts/overview). The Scotland NUTS1 area is broken down into five NFI reporting regions. The NFI is designed so that reports can be prepared for any significant geographic area. Please contact us if you would like to request a report tailored to provide information for a specific area or about a particular aspect of the data collected as part of the ground survey. We are also able to supply sub-sets of data to support research and business analysis.

If you own or manage a woodland which we need to survey we will attempt to contact you to make arrangements for a visit. We do our best to schedule visits at a mutually convenient time.

Although we have powers under the Forestry Act to enter private land without the owner’s consent we prefer to make the visit in a spirit of friendly co-operation and hence we try to make contact. If you have a particularly strong objection to our visit we might be able to look at visiting at a more convenient time. To ensure that the survey is statistically valid we prefer to visit our first-choice woodlands if we possibly can.

Survey visits cause no damage to land or property. We may simply ask permission to leave a handful of small peg markers. Surveyors will return to a randomly selected sub-set of plots at five yearly intervals after the first visit to record any changes that have taken place.

Most survey visits are carried out without input from owners or managers but if woodlands are some distance from a public highway we might ask your permission to take a vehicle on to the land. We may also ask you to unlock gates for us, or provide us with keys so that we can unlock them ourselves. All gates will be left the way they were found, and your keys returned.

Information about your woodland will only be used to contribute to a summary about the woodland in your region, country or Great Britain as a whole. It will be treated in strict confidence, and no specific information about individual woods or owners will be published. The data will not be passed on to other government departments or other organisations. The information will not be used to police or regulate any woodland activity.

The Forestry Commission has carried out National Forest Inventory type surveys, usually called ‘Census of Woodlands’, since it was set up in 1919. Each one has differed slightly in what was recorded in order to answer what were seen as the key questions pertinent to the times. After the First and Second World Wars this was largely ‘how much woodland and timber have we got left?’

The first ‘Census of Woodlands’ was carried out between 1921 and 1926 with the bulk of the work being carried out in 1924 (the 1924 Census for short) by means of questionnaires to owners and any wood of 2 acres (0.8 ha) and over was included. Also included was a ‘Census of Production of Home-Grown Timber’.

A new survey was begun in 1938 but was delayed and not completed until after the Second World War. The ‘Census of Woodlands 1947-1949’ had a minimum area of 5 acres (2.0 ha) and again concentrated on the affect that the need for timber during the war had had on the woodlands of Great Britain. Woodland managed by the Forestry Commission was included in addition to woodland managed by the Private sector. The most important thing about this survey was that it could be conducted with the benefit of a full flight of aerial photography courtesy of the returning RAF and was not solely based on samples or questionnaires as before. Sampling was used for volume estimation. The survey showed a small increase in the proportion of woodland area from 1924 (5.3%) to 6.1%.
The 1947 census was complemented by a survey of ‘Hedgerow and Park Timber and Woods under Five Acres’ also known as ‘small woods’.

By 1965 work on forecasting timber production for private woodlands which had been based on the 1947 data had become much less precise because the woodlands had been changing rapidly in the years between the surveys. The Forestry Commission woodland was regularly updated so the 1965 Census survey needed only to cover private woodlands and included woodlands of at least 1 acre (0.4 ha). Only fairly brief regional data was published.

By the late 1970s the private woodland data again needed to be updated and a new survey took place, ‘Census of Woodlands and Trees, 1979-82’ which again relied upon Forestry Commission information for FC woodland and also used information recorded under some grant schemes for part of the private woodland area as well. It was also the FC’s first use of digital mapping technology when the woodlands were digitised from Ordnance Survey maps.

The National Inventory of Woodland and Trees (NIWT 1995-1999) was the forerunner to the NFI. Results were presented as a series of inventory reports at a national and regional level. Although there is no direct link between the two surveys, many substantive comparisons are possible when the outputs of the NFI are analysed.

The Native Woodland Survey of Scotland is a full intensive stock-take of all native woodlands in Scotland and improves understanding of the native woodland resource and helps protect and expand Scotland’s native woodlands. The survey has different aims, timescales and outputs from the NFI, and uses a very different methodology and design. Work with the NFI enables comparison between the outputs and assists with Scotland’s monitoring requirements.