This plot is now closed

A summary of the variables monitored at this site can be found here. 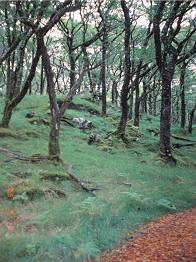 The management history of the Ardtornish plot can only be described in as far as what is known in general terms about the Atlantic oakwoods of western Scotland. Traditionally, the upland native woodlands of this region were used to shelter low numbers of livestock (usually cattle) and today there are frequently high numbers of sheep and cattle as well as deer.

Upland Atlantic oakwoods were also known to have been used intensively in the past for the production of charcoal, tanbark and timber with a peak in activity occurring around 1800AD, followed by a decline in management and eventual neglect. Many stands were planted and coppiced only once or twice, leaving poorly developed root systems and small crowned coppice stems. Some stands were subsequently stored to promote high forest whilst others have been left to naturally self-single.

Age ranges are now highly artificial (generally between 110 and 150 years) and stand structure is typically very uniform (see Peterken & Worrell, 2001). At the Ardtornish plot there is clear evidence of coppicing on old planted oak of 100-150 years.

Peterken, G.F. and Worrell, R. (2001). Conservation management of the Sunart Oakwoods SAC and the potential for supporting rural development. Report for Caledonian Partnership for the Life ’97 project.