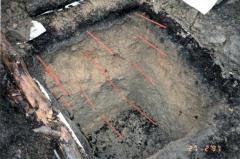 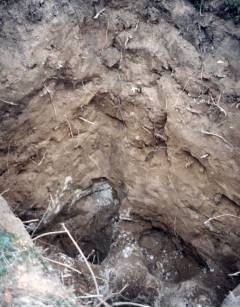 The soils of the Intensive Forest Monitoring plots were extensively characterised when the network was established in 1995.

Several soil indicators suggest that infertile soils at some Intensive Forest Monitoring sites (Grizedale, Lady Bower, Rannoch and Coalburn) are vulnerable to loss of base cations as a result of acid deposition. These sites are mainly on podzolic soils, which are representative of a significant proportion of British forests.

Other Intensive Forest Monitoring sites, such as Thetford (on a calcareous sandy soil over chalky drifts) are more resilient due to their high base status. Forest soils with a low organic matter content and surrounded by intensive agriculture, such as the Thetford site, are at risk from the effects of high nitrogen deposition (Pitcairn et al., 1998). This is clearly demonstrated by a soil carbon to nitrogen ratio of less than 5, reflecting excess nitrogen mineralisation and leaching (Emmett, 2002), together with high nitrate concentrations in soil solution at this site.

The Intensive Forest Monitoring data also highlights the variability in soil carbon stocks and provide a baseline for reporting future changes in soil carbon. Soil solution is the primary source of nutrients to be taken up by trees, and is more responsive to changes in external factors than the soil itself. Soil solution chemistry is influenced by many external factors such as precipitation, temperature, microbial activity in the soil and chemical inputs from atmospheric sources and tree litterfall. Soil solution has been continuously monitored by tension lysimeters in nine Intensive Forest Monitoring sites since 1995. The concentration of sulphate (SO4–S) in soil solution at most sites has decreased in recent years, consistent with the decline in atmospheric sulphur deposition.

For example, at the Scots pine sites, the nitrate concentration is negligible at Rannoch in highland Perthshire, relatively high at Lady Bower in the Pennines, reflecting the site’s historical pollution loading, and very high at Thetford (up to three times the UK drinking water limit). Nitrate concentrations in soil solution have also increased dramatically at two of the Sitka spruce sites, Tummel and Coalburn. At the first of these, the initial rise in concentration followed thinning in 1996. However, subsequent peaks appear to follow severe defoliation by the green spruce aphid, which is confirmed by litter-fall analysis. The high nitrate levels at Coalburn may be due to the reduced demand for nitrogen as the tree crop ages. Nitrate concentrations are also relatively high at Savernake, reflecting the proximity of agricultural activities, changing patterns of which may explain the large variability observed at the site.

A recovery of the highly acidified Lady Bower site is evident with an increase in soil solution pH and decline in aluminium concentration. The soil solution calcium to aluminium molar ratio is very variable across the Intensive Forest Monitoring sites, but ratios below the critical threshold of 1.0, which indicate a potential risk of aluminium toxicity to tree fine roots (Cronan and Grigal, 1995), have been observed at Grizedale, Lady Bower and Llyn Brianne. These sites receive the highest atmospheric pollution inputs of acidity, sulphur and nitrogen and represent the most sensitive soils.

Dissolved organic carbon in soil solution has also been monitored since 2002 and temporal variations provide an indication of the dynamics of soil carbon at these plots, of importance when evaluating changes in forest carbon stocks and stock changes.

Cronan, C.S. and Grigal, D.F. (1995). Use of calcium/aluminum ratios as indicators of stress in forest ecosystems. Journal of Environmental Quality 24, 209–226.