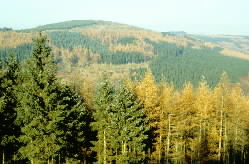 The production of hybrid material as the end product of a breeding programme has meant that progeny testing has always involved the testing of hybrid larch (HL) families derived from European (EL) and Japanese larch (JL) plus trees.

All progeny test material has to be produced from artificial pollination of plus trees of one species with a mixture of pollens of the other to ensure pure hybrid seed for testing. Since plus trees were often mature at the time of selection, this type of ‘hybrid polycross’ progeny testing had to be delayed until grafts in a clone bank were ready to flower. Unlike other species in which open-pollinated material could be used, there was thus a minimum delay of about 10 years between plus tree selection and progeny testing.

It is difficult to carry out controlled pollinations with the larches since they flower early in spring when damaging frosts and gales may still occur, the number of full seed per cone is often less than 10 and there are problems associated with pollen storage and assessments of pollen viability. Consequently, sowing of progeny tests is often delayed while sufficient seed is accumulated over several years. Progress was inevitably slow. Each year in which pollinations were carried out in clone banks and untested clonal seed orchards, involving hard work in inhospitable outside conditions, was often only to be rewarded with a poor harvest due to any combination of the problems noted above.

Between 1959 and 1994 a total of 71 larch progeny tests were planted. The fact that these constitute 43 series reflects that replication across sites was often less than three (many on only a single site) due to shortage of seed. This 36-year period includes an interruption between 1964 and 1973 when the breeding programme was put on hold for economic reasons. Despite the difficulties associated with the production of hybrid larch families, some outstanding hybrid full-sib crosses have been identified offering considerable gains over JL or EL of seed stand origins. One of the early superior specific family combinations was EL6 x JL42 which latterly appeared as a control in HL progeny tests as a measure of the standard required by new, high-performing hybrid combinations.

A small number of selected EL and JL parents have now been identified and a small breeding population has been constructed. The possibilities of mixed-species clonal seed orchards or the mass vegetative multiplication of hybrid families made by artificial pollination exist for producing a supply of improved hybrid larch.