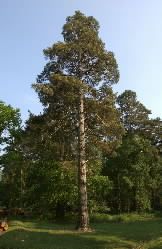 Around 1100 Scots pine plus trees were selected in forests all over Britain during the 1950s and 1960s.

Progeny testing in Scots pine (SP) started a little earlier than in Sitka spruce, and by the end of the 1960s nearly 50 progeny tests comprising 16 series had been established in the forest. These contained open-pollinated families collected either from the standing tree in the forest or from grafted parents in a clone bank, or from families derived from artificial pollination using pollen mixtures of known composition. A further 64 Scots pine half-sib progeny tests (19 series) were planted in the 1970s and 21 in the first four years of the 1980s (7 series).

By spring 1984, the last progeny test to estimate the breeding values of parent plus-trees was planted. One or two full-sib progeny tests had been established during the half-sib testing phase and in 1987, three half-diallels were planted with the objective of investigating the relative importance of additive and non-additive genetic variance; data from these are not yet available.

As progeny-test data were collected, a rudimentary breeding population was constructed based on height and stem straightness. The best of the breeding population at any given time was used as a production population upon which grafting of clones for new tested clonal seed orchards was based.

In 1997, a complete analysis of all Scots pine progeny tests designed to estimate breeding values was carried out and 226 plus trees were re-selected for any new breeding population envisaged in the future (Lee, 1997b).

It is not expected that SP breeding will continue past this first generation.

It is uncertain where the relative emphasis in gain should be placed between height and stem straightness in the breeding of SP. There is a slight negative correlation between the two traits (r = -0.3). In order to give flexibility for the future, three alternative breeding objectives were developed, each involving a population of 200 re-selections. Since there was found to be great overlap between the constituents of these populations it was decided to retain a single breeding population of 226 parents with which any of the three objectives could be pursued.

Clonal seed orchards, both untested and tested, and a small number of seedling seed orchards have been established. The industry standard is Ferndown (SP70) offering predicted gains of 8% height and 0% stem straightness. Younger seed orchards offering greater gains should come on stream over the next few years.

No new seed orchards are planned although likely gains could range from 14% to 20% for height and 5% to 15% for stem straightness.