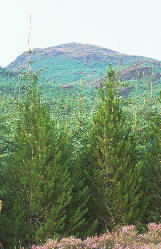 The first lodgepole pine progeny tests were established in 1964.

Initially, as with other species, the strategy was to collect open-pollinated seed from plus trees and evaluate their breeding values using replicated progeny tests. Among the exotic conifers used in Britain, lodgepole pine is perhaps the species with the widest range of variation due to origin within its natural range. However, because the early results of provenance testing had highlighted the fast early growth rates of origins from the coastal regions of Washington and Oregon, plus tree selection within these sources was initially favoured. Early data revealed that such parent trees still had very poor genetic quality for straightness and basal bow when planted in peat sites in the north of Scotland.

In the late 1960s some hybrids between widely separated lodgepole pine provenances were planted. Some hybrids in these experiments showed particular promise and a detailed plan was conceived to make more widely separated inter-provenance crosses, some of which would perhaps combine in the progeny the vigour of south coastal origins with the better stem-form of north coastal or interior types. This course of action was also advocated in a report from Tony Shelbourne, a visiting New Zealand tree breeder and over more than the next decade large annual programmes following these aims were carried out. Full-sib families were created involving combinations thought to have high potential both within and between individual provenances. For this purpose, large numbers of good quality phenotypes were selected within thicket stage stands and controlled pollinations were carried out on site.

The resulting full-sib progeny tests were established over three sites. However, this type of mating design can give no indication of the breeding value of the parent trees and thus offers no information upon which to base backward selection. Since lodgepole pine is a species which flowers 5 to 10 years from seed, the same progeny-test material was planted out in parallel to the progeny tests as seedling seed orchards. The aim was to rogue these by removing poor families based on progeny test results. A range of wide inter-provenance hybrids was produced together with a smaller number of within-provenance hybrids.

Since the time when concentrated work on this species was taking place, its position in commercial forestry has fallen from that of the second most important conifer to a nurse species (for which the bushy Alaskan type is preferred) with a very limited use as a pure crop (Skeena River origin). Many of the less relevant crosses from the breeding work have therefore been abandoned, but more relevant orchards have been rogued and are now in production.

No more breeding work was envisaged when the programme was formally closed in 1993.