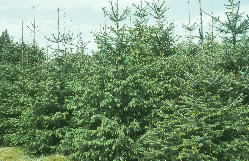 The genetic improvement of Sitka spruce commenced in 1963 with the selection in British forests of superior individuals for height, diameter, stem straightness and branching quality (Fletcher and Faulkner, 1972). These trees were known as plus-trees and nearly 1800 such trees were selected from stands thought to be of Queen Charlotte Island (British Columbia, Canada) origin over the following 20 years.

Superior selections in the forest may appear as such due to their genetic quality or due to a favourable growing environment. A screening is required to assess the relative genetic value of selections, independent of environment. The method employed with Sitka spruce has been to collect wind-pollinated seed from all plus-trees. The mother is therefore known and the pollen input comes from hundreds of genetically different individual trees. The trees raised from the seed are referred to as progeny. The growth characteristics of progeny from around 50 different plus-trees are compared in fully replicated comparative trials planted on uniform sites on three different locations in Britain (Lee, 1993). The progeny from all 1800 plus-trees have now been established in over 200 progeny tests.

Differences due to planting year, site and replicates are removed statistically allowing the comparison of all progeny to a standard unimproved seed-lot from Queen Charlotte Islands (QSS). The performance of the progeny allows the genetic quality of the parent plus-trees to be calculated. Re-selection of plus-trees now takes place; those with poor genetic values are rejected whilst those with high genetic values are selected for the breeding programme.

Progeny are assessed for height or diameter, stem-straightness and wood density. Final selection for the breeding population is based on a combination of all three characters.

The industry requires fast growing, straight trees with high wood density. The strong negative correlation between trees selected for stem-diameter and wood density makes the concurrent improvement of these two characters difficult. Stem-straightness, however, has a neutral correlation with both diameter and density making concurrent selection for either of these trait combinations relative easy.

Multi-trait index selection has been used to assist breeders achieve a balance in the increase in character genetic values when constructing breeding populations. The process involves knowing the genetic correlations between characters (to what degree characters are controlled by the same genes), the heritability (degree of genetic control) and the relative economic value of each character (Lee, 1994a). An overall index score is attributed to each plus-tree which is now an amalgam of all three traits (Lee, 1995). Ranking based on index values means that plus-trees with for example high genetic value for diameter but poor for density will be more likely to be lower ranked compared to trees with slightly above average genetic value for each character.

The top 240 plus-trees have now been re-selected for the Sitka spruce General Breeding Population (GBP). Scion material from the upper crown of the re-selected plus-trees has been grafted onto juvenile rootstock and planted in archives called clone banks. This ensures the genetic material is not lost and allows the creation of many replicates of the same genetic individual. An added advantage is that the mature scion continues to produce male and female flowers in its new position close to ground level.

The objective of the breeding population has been to maximize genetic gain for diameter and straightness whilst preventing a fall in wood density. The breeding population forms the basis for future controlled pollinations. Second generation families will contain gene combinations which on average are far superior to those of the first.

Additional grafts of the top-ranked plus-trees from the breeding population are brought together to inter-mate either naturally in a seed orchard or artificially using controlled pollination to produce family mixtures for vegetative propagation. These highly selected plus-trees are collectively referred to as a production population. All production populations made available to date have been from the GBP.

Predicted genetic gains for diameter and stem-straightness vary from 15% and 7% from seed orchards to 22% and 16% from family mixtures. The gains from family mixtures precede those from seed orchards by around 10 years. The time differential between sources arises because seed collection in an orchard has to be delayed until all clones are making an equal contributions to the gene pool, a problem which is circumvented in controlled pollination by isolating selected females and introducing stored pollen in equal proportions.

The disadvantage to forest managers of family mixtures is that the cost of the additional labour involved with controlled pollinations and vegetative propagation means the planting stock is two to three times more expensive than seed orchard material.

Predicted genetic gains are calculated using data and variance components collected from progeny tests. In 1993, a series of Genetic Gain Trials was planted on 15 sites across Britain (Lee, 1994b). These trials will investigate how close predictions are to actual realised genetic gains over a range of site types by comparing seed-lots collected from seed stands, seed orchards and family-mixtures against unimproved material.

Five-year height data collected from a similar early trial in Wales adjacent to one of the earliest progeny tests involving second generation material, give an idea of likely realised gains relative to unimproved QSS. Actual gains for 5-year height would appear to resemble predicted gains quite closely e.g. seed orchard predicted at 15%, and realised at 17%; next generation of crosses predicted at 35%, and realised at 33 to 40%. It is also worth noting the superiority of the QSS seed stand and unimproved Washington origin (WSS) relative to unimproved QSS on this fertile Welsh site.

Variation of performance within improved seed-lots

It is important for managers to realise that not every tree will behave according to the quoted predicted or realised genetic gain figures. The figures represent the over-all average increase of the planting stock relative to unimproved QSS material. This means some trees will be far superior to the quoted percentage improvement and some will be less, but on average the improved seed-lot will exceed unimproved QSS by the quoted figure.

Into the next generation

The Sitka spruce breeding programme is now advancing into the second generation. Spring 2000 will mark the fifth pollination season in which controlled pair-matings have been carried out between genetically superior clones in the breeding population. A strategy has been adopted which involves placing more crossing effort on the better clones (Lee, 1994a) to increase the rate of gain. It is expected that it will take 8-years to complete this crossing programme with existing resources. Field testing of new crosses commenced in 1999.

Earlier full-sib progeny tests suggest that genetic gain for 5-year height from production populations of the better pair-matings in the second generation could be around 35% relative to seed directly imported from the Queen Charlotte Island. Since more than half the total genetic variation occurs between trees within families, there will still be large amounts of genetic variation available from which to select for the new breeding population. There remains scope to make significant positive gains for wood density as well as vigour in the next generation.

In order to satisfy customer requirements it is intended to produce a number of alternative production populations by altering the economic weight placed on trees selected within the breeding population. It is now possible to acquire control-pollinated family mixtures with an increased weighting and genetic gain on stem-straightness. Control-pollinated family-mixtures designed to show positive increases in wood density are available.

The progeny of over 300 plus-trees of Washington origin selected either in Britain, Ireland or Washington State, USA were planted in comparative progeny tests in 1990 and 1991. It is intended that progeny in these tests will be fully screened for height, stem-straightness, branching quality and wood density. Multi-trait breeding and production populations can then be composed which should yield the first improved family mixtures 10 years from now.

Clonal forestry is currently not being practiced due to technical problems regarding physiological aging which prevent the production of commercial qualities of selected clones either by tissue culture or cuttings once they have been identified in field tests (John, 1992).

Fletcher, A.M. and Faulkner, R. (1972) A plan for the improvement of Sitka spruce by breeding and selection. Forestry Commission Research and Development Paper No. 85, HMSO, London.