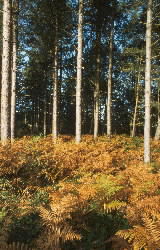 Corsican pine (CP) could never be considered a major species nationally, but it has retained local importance, particularly in East England. There have been certain years, namely 1976 and 1987, when there has been great activity devoted to CP. In 1976, a single progeny test containing 524 open-pollinated families was planted in Thetford Forest (East Anglia). In 1987, a further 350 open-pollinated families were put out to test in seven different series; each series contained approximately 50 families and was replicated across 3 sites.

In both the 1976 and 1987 tests, the selected parent trees were chosen as above average, flowering phenotypes within good quality stands, known to be of an appropriate seed origin, in Thetford forest. Seed was collected by climbing the trees and the progeny were put out to test very soon thereafter.

Previously, 15 open-pollinated CP progeny tests had been established during the late 1960s and early 1970s containing material collected from a much smaller number of plus trees selected in the more traditional way involving a very high selection differential.

Assessments have been carried out for vigour and stem straightness, but wood density has never been measured.

Tested seed orchards have been established although they have yet to yield seed. New seed orchards containing a production population following the BLUP analysis of first generation progeny tests would offer extra genetic gain.

It is not envisaged that breeding will proceed into a second generation.