Widely distributed and common, groups of buff-tip larvae can be found feeding on many deciduous tree species, including oak (see below left) and willow (see below right). They are frequently found in woodland, open countryside and urban gardens and parks.

Yellow and black patterned caterpillars with grey/white hairs. Caterpillars can grow up to 50mm in length and are found in late summer into autumn

Buff-tip caterpillars do not produce nests but do live socially when young,

Buff-tip adult flight season is mainly June-July, and females lay eggs in clusters on the underside of host leaves, with larvae emerging 14-21 days later. Compared with the other OPM look-alike species described on these pages, buff-tip caterpillars emerge quite late in the year, present from around July-October. During this time, they live socially, completing full larval development in approximately 30 days. In October, once fully grown, the larvae separate and enter the soil where they pupate; the adults then emerge from around late May-July the following year and are nocturnal.

Although buff-tip occur later in the summer than OPM, from a distance they can resemble this species when their abundant fine grey hairs (setae) catch the light. However, on closer inspection they are easily identified by their distinctly patterned yellow and black body with grey and yellow stripes.

As with most species of social caterpillars, defoliation can be severe on small tress. However, as the caterpillars are active late in the summer, there are little to none long-term impacts on the health of the host plants. It is also unusual for an individual plant to be affected by the caterpillars two years in a row.  As such, control is rarely, if ever, needed.

Hairs can be an irritant, but susceptibly is variable between individuals. 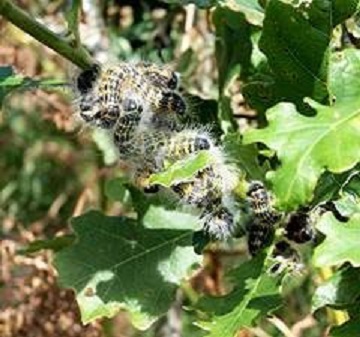