Native species that may be mistaken for oak processionary moth 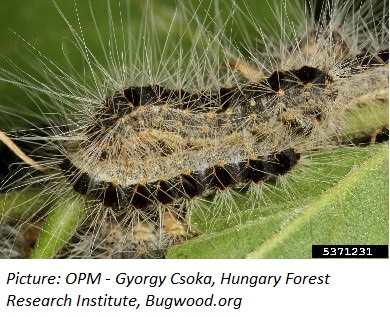 This page lists the caterpillars which are most often mistaken for oak processionary moth (OPM) through our advisory service Tree Alert. All seven of the species described on this page are straightforward to identify, but if after checking this page you are still unsure then please submit an enquiry through Tree Alert.

Please click on the caterpillar of interest (at the bottom of the page) to access its species-specific page with more information.

Oak processionary moth feeds only on oak and produces large nests on oak trunks and large branches from May onwards. Hairy caterpillars which are not on oak or are not associated with a silk nest are almost certainly not OPM. In very rare circumstances however, caterpillars which have fallen from the nest may be found in isolation, in which case they can be identified as OPM by their long white hairs on a dark, un-patterned body.

All caterpillars with hairs have the potential to be allergenic and direct handling is best avoided. However only oak processionary moth and brown-tail caterpillars produce enough allergens to be considered potentially harmful.

Some caterpillars feed socially in communal nests built from silk webbing on oak trees which can look similar to those produced by OPM. The two most commonly reported are the lackey moth (Malacosoma neustria) and brown-tail moth (Euproctis chrysorrhoea), which are often encountered during spring and early summer. However, both species will feed on a wide range of other trees as well as oak.

Small ermine moths (Yponomeuta spp.) also produce large quantities of conspicuous silk webbing on a variety of host trees and shrubs, although they do not occur on oak. They rarely form discrete nests, but instead a diffuse sheeting across the host plant.

Less frequent, are larvae of the small eggar moth (Eriogaster lanestris), which also produces a silk nest. This species was formerly common in hedgerows, but it has become scarce and rather localised. It does not feed on oak.

Although they do not build any form of nest, the hairy larvae of the buff-tip moth (Phalera bucephala), vapourer moth (Orgyia antiqua) and young gypsy moth (Lymantria dispar) are often seen in groups, sometimes in quite large clusters. All three species will feed on oak, but the colourful and brightly marked caterpillars are easy to distinguish from OPM

This table can be used to identify suspect OPM caterpillars. The important characters for identification are in bold. Sizes represent the usual range for caterpillars when encountered, they may be smaller than this in some situations.