Slowing the flow at Pickering – About the project 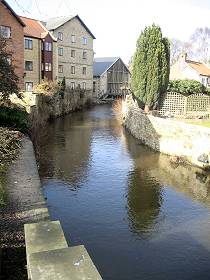 View of Pickering Beck from The Ropery Bridge, central Pickering

What is the project?

Slowing the Flow at Pickering seeks to demonstrate how better land management can help to tackle the flooding problem faced by Pickering in North Yorkshire, in common with many other towns and cities across the country.

Flooding appears to be an increasingly common event and one that could get even worse with climate change. Pickering has been flooded four times in the last 10 years (1999, 2000, 2002 and 2007), with the last flood the most serious to date, causing damage to homes and businesses valued at approximately £7m. The impact of the 2007 floods was particularly severe across the whole of the Yorkshire and the Humber Region, with the total damage estimated at £2.1 billion.

Slowing the Flow at Pickering is a partnership project. It is led by Forest Research, closely supported by Forestry Commission England, The Environment Agency, The North York Moors National Park Authority, Durham University, Natural England and the wider community. The lead funder is Defra.

There is a great deal of public interest in the project and local people and organisations are actively encouraged to participate and help achieve a successful outcome.

What do we mean by land management?

The new approach to flood management relies on making changes to the way the landscape is managed, so that the passage of rainfall to rivers and its movement downstream is reduced and delayed. This involves a range of ‘measures’, including:

How will we measure success?

The aim of the project is to implement a range of land management measures that will slow down water in the upper catchment, store more in the middle section and improve its conveyance through the town. Success will be gauged by the number of measures that are implemented and by their combined effect on the frequency of future flooding in Pickering.

Initially, mathematical models were used to estimate the impact on flood risk but continued monitoring of river flows will allow these predictions to be tested and to prove whether the measures have been effective. The wider environmental benefits of the measures will also be assessed.

Slowing the Flow at Pickering is one of three pilot projects nationwide to receive a total of £1 million of Defra funding. The aim is to demonstrate how our natural resources can help protect against flooding. The funding is part of £28 million which DEFRA has allocated to fund projects that help communities adapt to changing flood risk in the face of climate change.

The two sister projects are:

Senior representatives from the main partners, responsible for steering and overseeing the project.

Representatives from funding and regulatory bodies plus land owning and managing organisations. Responsible for development and implementing measures approved by the Board.

Public face of the project and responsible for overall co-ordination and engagement.

Appointed representatives from Pickering Flood Defence Group, Ryedale Flood Research Group and the Civic Society to inform and represent the community via the Wider Delivery Group.

Planning and implementing a range of land management measures designed to slow down flood flows in the upper catchment of Pickering Beck.

Led by the Forestry Commission.

Designing low level bunds to increase the storage of floodwaters in the lower reaches of the Pickering Beck.

Led by the Environment Agency.

Led by the Forestry Commission.