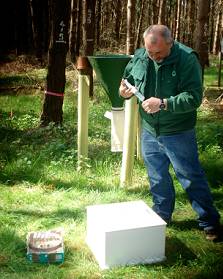 Forests are both sources and sinks for several different greenhouse gases (GHG), including carbon dioxide (CO2) that is exchanged during photosynthesis, respiration and decay, methane (CH4) which is released during anaerobic decay processes and nitrous oxide (N2O) which can be released during the cycling of mineral nitrogen. Growing trees takes up CO2 from the atmosphere, and using timber and wood fuel can reduce GHG emissions from fossil fuel combustion.

Therefore, understanding the processes and rates of exchange (or ‘flux’) of these GHG in forests, and how they are affected by forest management is a substantial part of our research. Main topics are:

Measurement of CO2, CH4 and N2O fluxes above and below the forest canopy 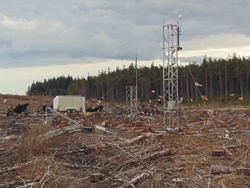 Methodologies have been developed to take simultaneous measurements of CO2, CH4 and N2O exchange above and below the forest canopy, using both soil chamber and micrometeorological eddy-covariance methods.

Soil chambers have fixed bases installed long-term, to minimise disturbance, and are temporarily closed at fortnightly or monthly intervals with a lid to allow the sampling of the air in the ‘headspace’ over a short period (hour or less). Air samples are then analysed using gas chromatography or continious gas analyser to estimate rates of GHG efflux or uptake. Records over several seasons are then analysed to estimate annual budgets and to assess the influence of weather variations.

Eddy-covariance methods use continuous sampling of air above the forest canopy at high rates, with sensitive and rapid gas analysers (using Quantum Cascade Laser Absorption Spectrometry) and rapid wind speed and turbulence information recording to estimate exchanges between forest and the air moving above it. We are using these methods to measure CH4 and N2O fluxes alongside our long-term CO2 measurements in oak woodland site (see Straits Inclosure long-term carbon flux site) and at our upland spruce forest site (see Harwood Forest).

Information from these measurement programmes are used to develop quantitative models of GHG exchange, and to assess the effect of different conditions and management techniques.

Effects of clear-fell harvesting on soil CO2, CH4, and N20 fluxes in an upland Sitka spruce stand in England

The effect of clear-fell harvesting on soil greenhouse gas fluxes of CO2, CH4, and N2O was assessed in a Sitka spruce forest growing on a peaty gley organo-mineral soil in northern England. Fluxes from the soil and litter layer were measured monthly by the closed chamber method and gas chromatography over 4 years in two mature stands, with one area harvested after the first year. Concurrent measurements of soil temperature and moisture helped to elucidate reasons for the changes in fluxes. Figure 1 show that in the 3 years after felling, there was a significant increase in the soil temperature, particularly between June and November (3 to 5 oC higher), and in soil moisture, which was 62% higher in the felled area, and these had pronounced effects on the GHG balance in addition to the removal of the trees and their carbon input to the soil.

Figure 1. Mean soil temperature (oC) at 2 cm depth (a), volumetric soil moisture content (cm3 cm-3) (b), and median soil CO2 (c), CH4 (d), and N2O (e) fluxes measured from eight chambers per area approximately monthly throughout the experiment in Harwood Forest. Black symbols and lines are for area A (mature spruce stand, remaining) and red are for area B, (mature spruce stand, clear-felled after one year) as indicated by the dotted vertical line. Error bars are standard error of mean of eight replicate measurements of the soil temperatures and moisture.

Annual soil CO2 effluxes reduced to almost a third in the first year after felling (a drop from 24.0 to 8.9 tCO2 ha-1) and half in the second and third year (mean 11.8 tCO2 ha-1) compared to before felling, while those from the unfelled area were little changed. For N2O and CH4 the results were expressed using their global warming potential (GWP) of 298 and 34, respectively. Annual effluxes of N2O more than doubled in the first two years (from 1.0 to 2.3 and 2.5 tCO2e ha-1, respectively), although by the third year they were only 20% higher (1.2 tCO2e ha-1 yr−1). CH4 fluxes changed from a small net uptake of_0.03 tCO2e ha-1 yr−1 before felling to a small efflux increasing over the 3 years to 0.34 tCO2e ha-1 yr−1, presumably because of the wetter soil after felling. The summary of these results are illustrated in Figure 2 which show the ratios of annual soil GHG fluxes in area B (mature stand, felled after year 1) to that in area A (mature spruce stand, remaining) in Harwood Forest. 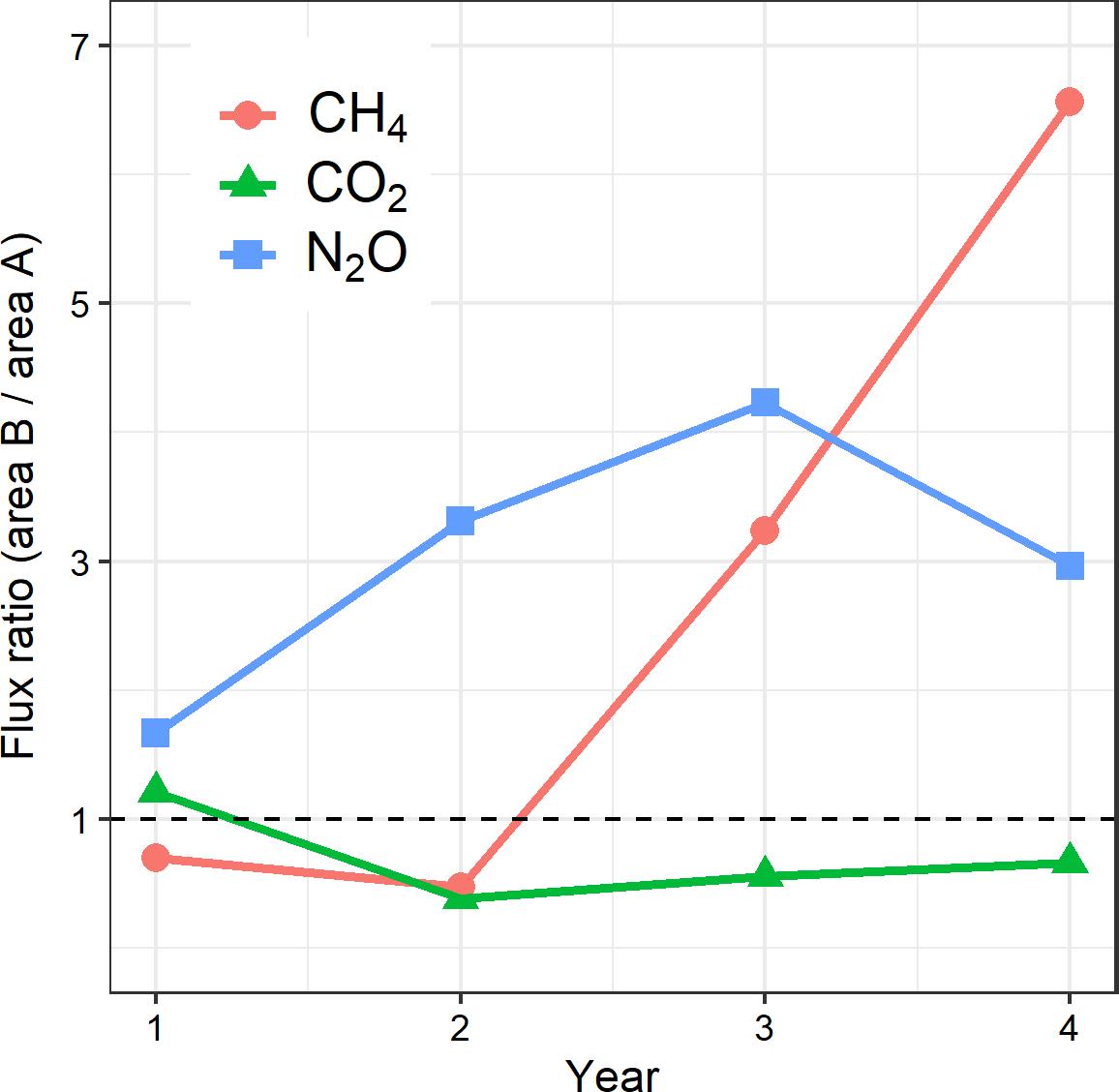 Figure 2. Ratios of annual soil GHG fluxes in area B (mature stand, felled after year 1) to that in area A (mature spruce stand, remaining) in Harwood Forest. Note: CH4 fluxes are presented as absolute values. The dashed line represents ratio = 1 (no difference between areas).

Soil CO2 effluxes dominated the annual net GHG emission when the three gases were compared using their GWP, but N2O contributed up to 20% of this. This study showed fluxes of CO2, CH4, and N2O responded differently to clear-felling due to the significant changes in soil biotic and abiotic factors and showed large variations between years. This demonstrates the need for multi-year measurements of all GHGs to enable a robust estimate of the effect of the clear-fell phase on the GHG balance of managed forests. This is one of very few multi-year monitoring studies to assess the effect of clear-fell harvesting on soil GHG fluxes.

Understanding the carbon and greenhouse gas balance of forests in Britain, Research Report 2012 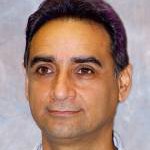