Recently published research in the Journal of Fungi reveals the destructive tree pathogen Phytophthora ramorum originates from the laurosilva forests of East Asia.

The research is part of an ongoing initiative to understand the origins of various Phytophthora species that are highly damaging to trees in the UK and Europe and formed part of an EU Horizon 2020 project – Pest Organisms Threatening Europe (POnTE). 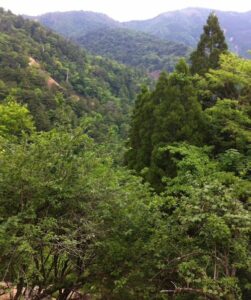 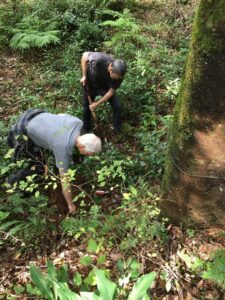 Forest Research scientists Joan Webber and Clive Brasier were involved, carrying out expeditions to sample rivers and soils for Phytophthoras in the forests of Vietnam and Japan in 2017 and 2018. The work was undertaken with colleagues from the Phytophthora Centre (Mendel University, Czech Republic) and the University of Gifu (Japan).

Many different Phytophthora species, including some unknown to science, were discovered but perhaps most notably P. ramorum was detected in northern Vietnam and southwest Japan.  A species introduced to North America and Europe over two decades ago, P. ramorum has since killed millions of oaks in the USA and similar numbers of larch trees across the western British Isles.

Analysis of the 70 isolates of P. ramorum obtained during the surveys has revealed eight new, genetically and behaviourally distinct lineages in the region. The eight Asian lineages do not correspond to any of the known linages currently invading Europe and North American ( EU1, EU2, NA1 and NA2) although they show different degrees of relatedness to the North American and European lineages, with probably one Asian lineage from Japan most closely related to the NA2.

Various stands of evidence strongly suggest that P. ramorum is a native inhabitant to the laurosilva forests that exist between eastern Indochina and Japan. The lineages found are evolutionarily ancient and differently adapted – they probably started to diverge from a common ancestor between 0.5 and 1.6 million years ago. Their evolution is likely to have been driven by the repeated glaciation events, which caused geographic isolation and allowed genetic divergence within the ancestral population of P. ramorum.

The findings also raise other critical questions, not least: if some lineages of P. ramorum are native to Japan, why does native Japanese larch in that country remain apparently unaffected by disease in contrast to what occurs to the same host in the UK? Also, how much of a threat could the other new P. ramorum lineages pose to shrubs and trees in the UK compared with the two lineages that are already here?

26th October 2022
A new United Kingdom-wide guide outlining how our forests and woodlands can reduce the damaging effects and financial impact of flooding on vulnerable communities has been published by the Forestry...

Our tribute to Her Majesty Queen Elizabeth II

9th September 2022
We are greatly saddened at Forest Research by the death of Her Majesty Queen Elizabeth II. Our thoughts and condolences are with The Royal Family. The Queen was involved in the...

26th October 2022
A new United Kingdom-wide guide outlining how our forests and woodlands can reduce the damaging effects and financial impact of flooding on vulnerable communities has been published by the Forestry...

Our tribute to Her Majesty Queen Elizabeth II

9th September 2022
We are greatly saddened at Forest Research by the death of Her Majesty Queen Elizabeth II. Our thoughts and condolences are with The Royal Family. The Queen was involved in the...