Hymenoscyphus fraxineus is responsible for causing severe dieback on European ash (Fraxinus excelsior) and narrow-leaved ash (F. angustifolia) across Europe. The disease is commonly known as Chalara ash dieback and was first noticed in Poland in the early 1990s. However, H. fraxineus was not identified as the cause of the disease until the mid-2000s.

The first signs of the disease on affected trees are leaf spots, initially small and then enlarging which cause a foliar necrosis. These leaf spot infections are caused by the ascospores of the fungus which are produced from fruit bodies formed on the rachises (leaf stalks) of leaves on the ground, shed from affected trees in the previous year. When the leaves are still attached, the necrosis can sometimes progress from the leaves into shoots and the fungus produces diamond shaped lesions as it extends into the bark on branches and stems. Affected branches or stems are gradually girdled and die, and leaves on girdled shoots wilt and wither.

The disease was first detected in England in 2012 and soon after in Scotland and Wales. Therefore, the disease has been present in Britain for at least six years although recent studies have shown that the fungus was probably introduced into Britain in the 1990s, even before the fungus was described as the cause of the disease in Europe in 2006. The main affected species is still European ash, of all ages (mature and young).

As spore numbers increase in areas where ash dieback is well established, new infections have been detected on other non-native ash species such as F. americana, F. caroliniana, F. latifolia, F. mandshurica, F. ornus and F. pennsylvanica. If you want to report any suspect findings of ash dieback, especially on unusual hosts, please report through TreeAlert. 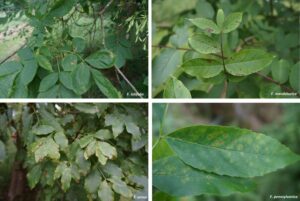 Most recently, H. fraxineus has been detected on non-Fraxinus hosts: Phillyrea latifolia, P. angustifolia and Chionanthus virginicus. The first case was reported through TreeAlert and samples were sent to the Forest Research Tree Health Diagnostic and Advisory Service (THDAS) for examination. The P. latifolia trees had been planted in August 2011 but had recently developed symptoms of dying branches and showed discolouration of the wood in the affected branches. Isolations made from the samples, consistently yielded a fungus identified morphologically as H. fraxineus and confirmed by ITS sequences. Symptomatic plant material was also tested directly by realtime-PCR with specific primers and again tested positive for H. fraxineus. Following this, surveys of different tree collections resulted in further findings of H. fraxineus on Phillyrea and Chionanthus. In all cases, the location of these non-ash hosts was in the vicinity of many native ash trees with typical symptoms of Chalara dieback, indicative of high spore levels. The findings of infection by H. fraxineus on Phillyrea spp and Chionanthus are the first non-ash host records worldwide. 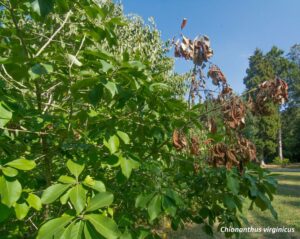 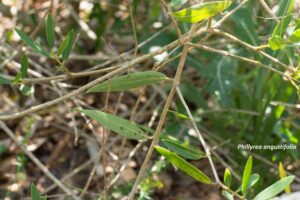 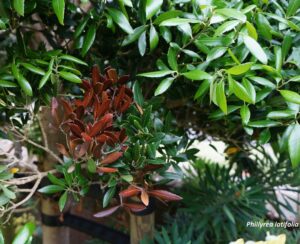 Both Phillyrea and Chionanthus belong to the Oleaceae family, as does Fraxinus. In all there are 26 genera, and an estimated 700 species within the Oleaceae. Some of these are commonly found in gardens such as lilac, privet, forsythia and jasmine and have in the past been tested by FR (and other researchers) as possible hosts of H. fraxineus but without positive outcome. However, none of these species/genera are in the tribe/subtribe that contains Fraxinus. The tribes are Myopyreae, Forsythieae (forsythia), Fontanesieae, Jasminiae (jasmin) and Oleeae. The latter has four further subtribes: Lingustrinae (includes privet and lilac), Schreberinae, Fraxininiae (ash) and Oleinae (includes Chionanthus – fringe tree, Phillyrea – mock privet, Osmanthus and olive). Phillyrea angustifolia is native to western and central Mediterranean Basin, Portugal to Albania; P. latifolia is native to the entire Mediterranean Basin, Portugal to Syria. What was a third species in the genus, but is now known as Osmanthus, is another potential host based on its close taxonomic relationship, but so far tested samples of Osmanthus have all been negative (as have lilac samples). Chionanthus virginicus is native to southern North America. 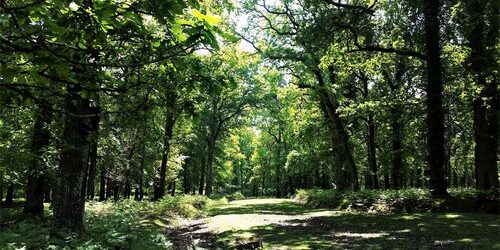 We are delighted to welcome two new members to the Expert Committee on Forest Science.  From 1 June Dr Julie Urquhart joins as social science expert and Dr Eleanor Tew will step on board as Early Career Professional Observer.

The guide outlines the steps that can be taken to foster woodlands which will be resilient to current and future threats as a result of climate change.

A state-of-the-art laboratory conducting innovative research into tree pests and diseases has been officially opened today (Friday 13 May) by Defra and the Forestry Commission, as part of National Plant Health Week.

We are delighted to welcome two new members to the Expert Committee on Forest Science.  From 1 June Dr Julie Urquhart joins as social science expert and Dr Eleanor Tew will step on board as Early Career Professional Observer.

The guide outlines the steps that can be taken to foster woodlands which will be resilient to current and future threats as a result of climate change.

A state-of-the-art laboratory conducting innovative research into tree pests and diseases has been officially opened today (Friday 13 May) by Defra and the Forestry Commission, as part of National Plant Health Week.