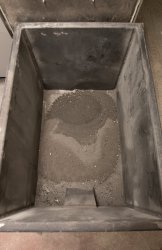 Ash is an inevitable product of the combustion of solid fuel. It can be viewed as a waste to be disposed of, however it also contains valuable minerals and can be used as a fertilizer.

Ash from combustion of biomass in high efficiency modern combustion equipment such as boilers or stoves primarily consists of the non-combustible, mineral constituents of the fuel as oxides or salts. As mentioned above, it falls into two components, those, primarily larger, particles that fall through the grate during combustion and are collected as bottom ash, and the very fine particles that are carried in the flue gases and are known as fly ash.

As it contains the minerals taken up by the biomass during growth, such as potassium and phosphorus, unless it has been contaminated in some way, bottom ash can form a valuable fertilizer, although it does not contain nitrogen. It can be used as a part of sustainable forestry operations. Owing to the highly concentrated nature of this ash, and the presence of oxides of alkali metals such as calcium and potassium, such ash tends to have a very high pH, and consequently it is neither necessary nor desirable, to use too much in one place, but it can be very valuable if distributed thinly. In Sweden the maximum allowed dose of wood ash is 3 tonnes per hectare. [See “Wood ash use in forestry – a review of the environmental impacts”, Rona Pitman, Forestry (2006), which gives guidelines for the UK]. Bottom ash can also be added to a compost heap, at a rate of up to about 15% of the total (by weight). It is recommended that in large scale ash application, such as might be associated with forestry, the ash is not applied in the loose form, but in a ‘granulated’ form, developed in Scandinavia, having been mixed with water and rolled into small balls. This makes it easier to handle and apply, slows nutrient release, and also reduces damage to ground vegetation, particularly mosses, on application.

Bottom ash can also be used for the manufacture of lightweight aggregate blocks, however the quantities required for economic operation make this feasible only for large, power generation scale operations.

Fly ash, collected from flue gas filters, however, should be treated with more caution. Any heavy metals present tend to be concentrated in the fly ash and as very little is generally produced compared with bottom ash it is should not be used as a fertilizer.